Charles of the Desert 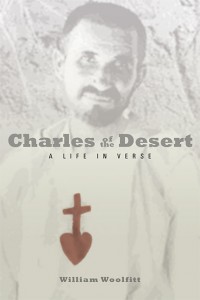 One early June, traveling to a wedding in San Diego, I’d taken the long way from Dallas by train. I wanted to see the Southwestern deserts. Two days later Amtrak’s Sunset Limited broke down in the Mojave Desert.

Pretty quickly it became clear: We are not so great. Nature is. God is.

Perhaps this is one reason why Charles de Foucauld went to live in the Sahara: not only to offer the people there hospitality and love as Jesus had, but also as a way to empty himself of the temptations of civilized life, allowing himself to be humbled by the vast universe.

The Christian hermit and martyr Charles of the Desert (1858-1916) is a complex, puzzling character. William Kelley Woolfitt’s new book of poems Charles of the Desert develops a full portrait of this mystifying cleric from childhood in 1863 to his last day in Algeria’s Hoggar Mountains. The poems, written in first person, proceed on a timeline, zigzagging geographically from France to the Holy Land to Algeria.

For over a decade, Père Charles lived a stringent life in the Sahara, a life that would kill most of us. He lived and worked among the Tuaregs, who saw him at best as an eccentric, at worst as an enemy. In 1916, he was assassinated by rebels attempting to rob and kidnap him. He left to the world a four-volume dictionary of the Tuareg language, a new order—the Little Brothers and Little Sisters of Jesus—and a public fascination for his austere life among the Muslims, whom he hadn’t been able to convert.

How hard his life must have been. Yet by some firsthand accounts, he was “luminous,” “peaceful,” and “pure.”

Charles’s young life, marked by the early loss of his parents, makes me wonder if his initial impulses toward the holy life were to satisfy not only a need to glorify God and do God’s work, but also to seek parents in the Mother Superior and the Abbot.

In Woolfitt’s poems I find a child who couldn’t know or understand his father. That man is described as “whip-like” and “half-lizard,” someone whose “whims enslave him.” He appears more like a “Weather Formation” in the young boy’s mind.

Charles’s mother seems to have languished and died, after a miscarriage and postpartum depression. Charles sees her as “Harp Seal, as Sacristan.” With his mother, Charles has an early memory of compassion for Jesus, “the man who hung on the church wall,” “the pale, poor eggshell man.” The child wishes to bring a blanket for him, but forgets to carry out this kindness.

Woolfitt’s formal poems are intriguing for the ways they develop Charles and those around him. Besides the innocent child, we also see the mischievous Charles asking a fictionalized sister Beatrix to “steal for me,” not just any small thing but “the gilded china baby” at grandfather’s house. For this, the boy is sent into the yard, shivering as he waits for his grandfather’s “lashes to mark me, while [grandfather] quakes // like a man waiting for grief to pass.” The older man’s grief at having lost his daughter, Charles’s mother, doesn’t extend to compassion for Charles and his sister.

Woolfitt adeptly draws the children’s hard life with their grandfather, so that when Charles declares, “We are not safe, sister,” in “The House of Bones,” I believe him. Charles grows to despise the old man.

The poems show us Charles’s lifelong allies, his sister and an older cousin, Marthe (also fictionalized)—beautiful and devoted to her faith. In her presence, Charles’s faith “rose like a tongue of flame,” but he “had nothing to feed it.” “Summer in Giverny,” a prose poem, defines an important moment in the boy’s development. This is the second time we see Charles’s wonder of God and adoration of Christ.

Yet his conversion is drawn out. After grueling trials at a Jesuit boarding school, Charles is sent on to military training and soldiering. On his own time, Charles becomes a “Gold Eater” who takes and takes—keeping a prostitute, eating and drinking to excess, and gambling.

Three years later, after he’s published a travelogue and “rooster-struts” the streets of Paris, Charles feels trapped by the excesses of his life. So that in “The Pangs of Wanting,” he longs to have faith. This poem marks the beginning of Charles’s conversion. At communion, Charles declares, “I almost vomit; I almost sing.”

Woolfitt’s poems are marked by a physicality of diction, the blunt words juddering next to the softer expressions. The poems also connect strong metaphors to intense moments in Charles’s life.  He makes a trek to Jerusalem “At the Ruins of Pilate’s Palace,” and seeing where Pilate “gave Christ to the throngs,” Charles presses his hand down “and, groove[s] / my skin with the grains of the paving stones.”

Back in France, living as a monk, he studies the breviary and learns to love the natural world; yet he cannot love himself, acutely declaring “I am foul matter.”

The poems also unveil the many iterations of Charles, as he searches for an authentic identity: Charles the profligate, the soldier, the injured child, the peasant. We also encounter Charles the escapee, the refugee, and the wanderer, before he finally becomes the devoted priest.

In a startling late moment, Charles cleanses himself with sand (“Desert Bath at Sunset”) and resolves not to despise what God has given him: “Your bruise-red sun / embers the tamarind tree.” He considers Teresa of Avila’s metaphors for the soul and finds them wanting. In his desert ministry, he finds the earth is “a malicious father.”

Late in life, Charles becomes despondent: “The ground is iron that I cannot sow,” while the Tuareg’s language continues to evade him. He can still admire God’s world, however, in “Pied Crow,” the crow’s “glossy black wings” and “snowy vestments,” even in “the goodness of this hand / rubbing my weary neck.” He declares, “All things made for our use, our conversion, / our wonderment.”

Woolfitt’s collection evokes our holy connection to the astonishing and sometimes terrifying forces around us and beyond us.

April 11, 2016
A Strange Season for Inter-Christian Families
Next Post

April 13, 2016 Finding Another World in Winterkill
Recent Comments
0 | Leave a Comment
Browse Our Archives
get the latest from
Catholic
Sign up for our newsletter
POPULAR AT PATHEOS Catholic
1