Praise Bands, Lipstick, and other Futilities of the Faith

Praise Bands, Lipstick, and other Futilities of the Faith April 28, 2016 Guest Contributor 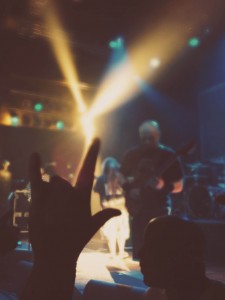 The drummer in the rock band at my church, bangs on his drum, living for the solo at the recessional where a small handful of fellow children of the sixties clap their hands and shake their hips in a way that seems, I don’t know, like everyone would rather be at the Whitesnake concert, but if that’s no longer possible or respectable, then maybe church will do, “For creation was made subject to futility…”

And the children of the seventies and eighties, lower their heads, intentionally somber at the recessional, walk out, crossing themselves to patiently await the death of church drumming. There are grumblings of course, on the way to the car, and once inside the car with the doors shut, my husband and I engage in a complete failure of charity about baby boomers and self-satisfied idiots who can never bear to surrender the stage. The sorrow is not just that the music is bad, it’s that there are so many people who think it’s great.

There will always be lectors in toupees and well-suited ushers with bad breath, and ladies who like pie better than Jesus (sometimes, I am she). And that’s just at church where everyone is supposed to be living life differently, set apart from the things of the world. Church sometimes feels like a smaller theater, the place where the lipstick on your teeth matters just a tiny bit more. What is this lipstick doing here anyway, when Monday through Saturday, it rests?

Church feels at times like the place where we are least honest, least transparent, least willing to forgive the faults of others. It is the place where the chains of futility are most apparent, because it’s here where we’ve come, supposedly, for relief.

I told my friend Pedge about my church and how much things have changed in the past year, and how heartbreaking it is at times. I’m on a committee that doesn’t do anything, so I go in once every couple months, and talk with my fellow committee members about things we should maybe be doing. People throw out ideas and solutions but there’s never a motion to second, except for small actions like bulletin announcements, or an agreement to purchase gifts for the catechumens.

It doesn’t seem very long ago that our parish was robust and committed to working together to make big things happen. We weren’t without problems, but we did things in the slow, regimented way in which all good things happen. Now we bleat and walk in circles, if we walk at all. Many have walked away.

“It’s like a wheel,” Pedge said, because she reads Father Barron’s website and relays snippets to me that correspond exactly with what’s going on in our lives. “Sometimes you’re going up, sometimes you’re coming down. The goal is to be in the center of it, so you’re not hanging on to the outside for dear life. Maybe your wheel is just on its way down.”

I know my wheel is on its way down. I don’t know how not to feel affected by it.

This has been a theme lately, that I just want to be in the mainstream for awhile, not in any fringe groups or movements, not so damn orthodox that I can’t make friends, not so traditional that I fail to see other people’s humanity, and not so freewheeling and shifty that I lose my compass—”just hanging out with the tension” (cool people do this) between justice and mercy.

All the turbulence is on the fringes. I wish to be in the center, calm, cool, collected, and unaffected by the futility of pointless meetings, and church drummers, tasting the glorious freedom of being a child of God. It’s just not as easy as I thought it might be.

Christ’s wheel came up, as he rode into Jerusalem, welcomed as a king. A week later, it went down, on the cross. Three days later, back up again. Resurrection! That’s not even counting his descent and ascent to hell and heaven.

Tobit’s wheel went down. He fell asleep without covering his face, and when he woke, he couldn’t see because the birds spent the night dropping turds on him. And then he’s blind and grouchy so his wife says, “Where are your good deeds now?” (Holy Roller, now that you’ve been shit on, and see nothing clearly anymore.) “Now your true character reveals itself.”

But the wheel comes up again. Tobit’s son survives marriage to Sarah. Tobit welcomes his son and daughter-in-law alive! His son puts fish guts on Tobit’s eyes, and the cataracts peel away! God is wonderful.

And through it all, Tobit was faithful, even if he did get a little grouchy.

In one way my wheel is coming back up. I’ve been meeting with my Schola choir, which is still just a small handful of us gathering after the five o’ clock mass in the parish basement. We sing our hymns in Latin, and each week, we are a bit more on the same page, the same note, the same word. Each week, we are a bit more free to add volume, to open the lungs, and enjoy the whole experience—even if we have no hope of usurping the boomer band. Maybe there is enough joy in being a few women singing in the church basement on Tuesday nights.

I always think I’m the one ministering. I’m the one infusing new life into my parish. I’m going to bring it—the awareness and the mystery— to the bleating goats on my ineffective committees.

But if God is good, if he really can be trusted, he can use even my misperceptions of my closest friends and acquaintances to teach me more about myself. He can use my complaints, my dumb lipstick, and all the futile exercises in the house of the Lord for ends I will never know.

The Resurrection, then, is not a journey upwards or outwards to some place on the exterior of existence, but rather towards the center of being, which is him—only him. And that is where I want to go, to feel myself and my bad feelings dissolved and usurped by his all-encompassing goodness.

April 29, 2016 Poetry Friday: "When God Dreamed Eve through Adam" by Richard Chess
Recent Comments
0 | Leave a Comment
""It doesn’t matter when you start the Sinatra Christmas playlist or put up your tree. ..."
C_Alan_Nault How to Win the War on ..."
"Yup."
Max Marvel Finding My Inner Calamity Jane
"I an confused by the use of "aural" here: "In The Gutenberg Galaxy, he explained ..."
William G II The Gutenberg Imagination
"My friend is looking for a Pepper Smith he served in the army with, was ..."
Christine Budnack The Love Song of Pepper Smith
Browse Our Archives
get the latest from
Catholic
Sign up for our newsletter
POPULAR AT PATHEOS Catholic
1