A Poet Walks Into a Business Networking Event

A Poet Walks Into a Business Networking Event May 12, 2016 Tania Runyan 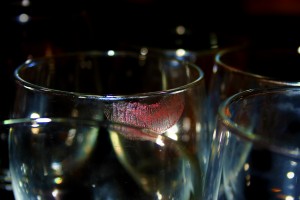 The poet gives a young woman $15 for admission, squeezes her drink ticket like a talisman.

The poet straightens her arms so she can shimmy through the crowd. She must reach the color-coded name tags. There’s a palette of categories: Tech, Finance, Start-up, Health. She must decide between Arts, yellow, or Marketing, red.

If she chooses yellow, she’ll marginalize herself. Yellow’s for novelties, freaks. If she chooses red, she’ll forsake her tribe, the writers who flounce through her photos in flowing skirts. Tonight she wears a tailored dress. A necklace strung with crystal squares.

She likes business writing. She relishes forming words to awaken the ear. Like poetry. But if she dips her foot in the business world, will it sweep her away? Will she forsake triolets for trade magazines, AWP for AMA? And when she notices, will it be too late to swim back?

She chooses yellow and writes her name, the last three letters squished in the corner. She gets a new label and tries again, then just to be safe, sticks a red tag beneath it, pressing both to her chest. I’m a marketing artist, she thinks. An artful marketer.

People lap at the balcony, walls. She can’t find the line for the hors d’oeuvres. Her stomach rumbles for the bruschetta strips. Men in blazers and blue Finance stickers plunge toothpicks in olives, throw back their heads and laugh.

She oozes through them to the bar. “Glass of cab, please,” she says, and plops down the ticket. She finds a small table and leans against it, a buoy scraping a pier.

A woman in a red dress and spiked heels sidles up. “You single?”

The poet squints, then holds up her sapphire ring. “Been married twenty-two years.”

“I run a dating service. Take this anyway.” She hands her a card and clicks off.

The poet sips her wine, watches women young enough to be her daughter cling together, the toes of their strappy shoes forming shining, leather stars.

A man approaches, and the poet finally finds something to say.

The man doesn’t understand.  “In what?”

“Introvert,” she yells into his year over the booming music and suddenly feels embarrassed for making a joke that has no place here.

“Well,” he says, “at least you’re a woman. You can walk straight through that crowd, no problem.”

The poet considers this statement, whether she should get angry. The man could have been one of her high school students at the turn of the twenty-first century. He’s a photographer specializing in mitzvahs.

The poet balks. “You mean people looking for work?”

She holds up her hand again. “I’ve been married twenty-two years.”

He looks at her like she’s a child. “Which makes you all the more a challenge. Be careful.”

She nods goodbye and wades across the room—excuse me, excuse me—to an empty couch. People don’t come to this party to sit. Her wine is already gone.

Another man approaches. She wonders what kind of meat she resembles. Tall, pale, tired. A chicken leg raised in a sad, cramped cage. Then she remembers many of her poet friends are men. She sits on couches with them all the time, feels safe amidst their beards and tattoos and sensitive references to Adelia Prado.

But these aren’t poets.

The man asks to sit down. He’s about sixty, one of the few African American men in the room. He shakes his clear cocktail: “What’re you drinking?”

Their thighs touch lightly. It seems innocent. But then again, she’s lost at sea.

He tells her he’s a contractor for public housing. She tells him she writes customer success stories that rank highly in Google search.

“Maybe,” she says. “Although…isn’t your customer the federal government?”

Suddenly his face softens into a smile. “You know,” he says, “I have a web site for my nonprofit, too. There’s a picture of me with Muhammad Ali. Can we trade cards?”

“I’m out,” she says, still reeling from the fact that she brought just a few. She thought most people didn’t collect business cards anymore. She was wrong.

She, too, looks out and notices the sun sinking quickly behind the horizon of buildings. She needs to walk to the parking garage a couple of miles away. The small black bows on her flats show specks from the rainwater streets.

He gives her the URL to his site, which she dutifully types into her phone to find later.

I’m not meat, she thinks. I’m a daughter. A mother. At forty-three, I can see in all directions, the twenty-somethings feeding on the frenzy of life ahead of them. The sixty-somethings floating in a daze of “Did those years just just happen?” Knees cracking like the man who just floated off in a dream of Muhammad Ali.

My knees crack, too.

I am elegant, beautiful, imaginative.

I am clueless, nervous, anonymous.

As she stands up, three young women with yellow stickers hold out their arms.

“A yellow girl!” they call to the poet, raising their glasses.

She hugs the strangers. She feels happy to be called a girl.

“What do you do?” yells a woman with whitecaps of highlighted hair.

“Yes! Awesome! Well, we just met a guy with a BOAT!” she screams, and all three of them jump up and down, sloshing their amber waves of beer.

“That’s why you come to these things,” a petite woman in an updo says. “To meet guys with boats. So you can ride down the Chicago River for free.”

“Isn’t that really what all of us want?” the blond woman says, hooking arms with her friends. “To just, you know, connect? What the hell else do we have?”

The poet says yes, that’s all she wants. She lifts her empty glass and composes a smile.

Image above is by Laura Lewis, licensed by Creative Commons.

May 13, 2016 Poetry Friday: "Middle Distance, Morning" by Margaret Gibson
Recent Comments
0 | Leave a Comment
""It doesn’t matter when you start the Sinatra Christmas playlist or put up your tree. ..."
C_Alan_Nault How to Win the War on ..."
"Yup."
Max Marvel Finding My Inner Calamity Jane
"I an confused by the use of "aural" here: "In The Gutenberg Galaxy, he explained ..."
William G II The Gutenberg Imagination
"My friend is looking for a Pepper Smith he served in the army with, was ..."
Christine Budnack The Love Song of Pepper Smith
Browse Our Archives
get the latest from
Catholic
Sign up for our newsletter
POPULAR AT PATHEOS Catholic
1