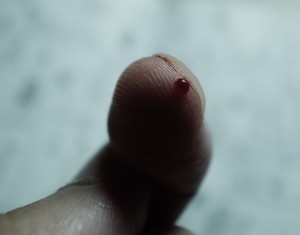 Here’s something I never told my parents: some years ago I got an HIV test.

I was working and living at a Catholic Worker house in Phoenix, a place I wound up after college. I had a freshly conferred bachelor’s degree in creative writing (not exactly bait for corporate recruiters) and a swirling head full of idealism.

Imagine: I assumed I could save the world. I thought the world could, in fact, be saved, or even that the world had some notion of its need for salvation in the first place.

Among other things, the Catholic Worker had a soup kitchen, and on Saturday nights I was the staff person in charge of making sure the goulash got cooked and served, the local parish volunteers had jobs to do, and that general peace and order were maintained among the guests.

“Guests” was acceptable terminology for the homeless men, women, and kids who shuffled in for dinner, out of the dusty alleys, wearing their tribulations as ripped up jeans and sunburns so bad they’d sometimes turn black.

One Saturday night, after the meal was over and most of the guests had wandered out, a straggler, a young woman with a shock of curly hair, overdosed at the table. She groaned and her body, alternately rigid and floppy, plopped onto the floor and would not, could not stop moving. There were slo-mo kicks and liquid attempts to stand.

I ran over to her, along with the volunteer cook. I remember the woman’s face under the fluorescent lights—her skin, tight and bronzed, her eyes so wide the yellow irises were rimmed entirely by the whites of her eyes.

But her pupils were so small. That’s distinct in my mind and always will be. Little, black snags in the fabric under her corneas.

Somebody called the paramedics and while they were on the way, the volunteer cook and I got her outside, to where the ambulance would pull up. We half-walked her, half-carried her, and she writhed in our arms the whole way.

Like a lot of people who live on the streets, she wore more clothing than was necessary. Her outer layer was a faded purple overcoat with deep pockets on both sides.

When the paramedics arrived, they snapped not one but two smelling salt capsules under her nose, practically shoving them into her nostrils. She jerked her head back and flailed all the harder.

Then they rifled through the pockets of her overcoat and pulled out a lighter and a metal spoon—common accouterment of the syringe-based heroin addict. Junkie tools. Two thirds of her rig at least—but where was the needle? Obviously the dope was doing its thing.

Finally, the paramedics loaded her into the ambulance and drove off. The volunteer and I looked at each other as if to say, “Well done,” and “Ain’t that a shame,” and, “I hope she’s okay.” But back inside, I noticed a thin trickle of blood coming from a pinhole at the base of my thumb.

“Holy shit,” I thought, “They missed the needle. It’s still in her pocket. And it jabbed me.”

I realize now, much too late in life, that my assumption I could somehow save the world was predicated upon the erroneous notion that the world couldn’t touch me. Or at least nothing in the world should want to hurt me.

I’d come to the dusty alleys on a mission of love. A side trip before I took possession of my heavenly home, a huge mansion prepped by Christ my personal carpenter, up in the clouds on a golden cul-de-sac.

Of course the idea that somebody has to save the world assumes the world needs to be saved in the first place. Certainly the woman’s dope habit, or the existence of dope at all, might suffice as proof. Dope and its effects on the body, at least in the moment of the rush, are nothing but a slightly misguided quest for the divine.

And God forbid I do a quick scan of my own problems that I’ve caused for myself.

Who will rescue me from this body of death?

Saving the world involves two things, as near as I can tell—divinity and a willingness to be harmed. As much as my ego whispers the opposite, divinity for me is out. In moments of sheer, painful honesty, as rarely as those moments may come, I admit that I am not a god.

And I also admit that I don’t want to be harmed. In fact, I think I’d like to be a Christian untouchable.

I’ll be God’s witness in this world—that sounds nice—but my price is protection.

“Then I heard the voice of the Lord saying, ‘Whom shall I send? And who will go for us?’ And I said, “Here I am. Send me!” with a guarantee that no matter who I meet down there, I don’t get hurt. Physically, emotionally, mentally, and in all other ways…when I check in at the pearly gates, not a scratch on me. Deal?

Except it’s a deal God didn’t even make with his own son.

The test was negative. I didn’t have HIV.

And I never saw that woman again. At least as long as I was there, she never returned to the soup kitchen.

Whether or not her needle nicked my hand I guess I’ll never know for sure, and that’s beside the point.

I think the world wants to be saved. But before it allows itself to fall, deflated, into the arms of somebody who can, in fact, save it, it has to have its say. “I’m no pushover. Touch me and I just might kill you.”

Image produced above is by Toshiyuki IMAI, licensed by Creative Commons.

June 21, 2016 Knee Walk
Recent Comments
0 | Leave a Comment
""It doesn’t matter when you start the Sinatra Christmas playlist or put up your tree. ..."
C_Alan_Nault How to Win the War on ..."
"Yup."
Max Marvel Finding My Inner Calamity Jane
"I an confused by the use of "aural" here: "In The Gutenberg Galaxy, he explained ..."
William G II The Gutenberg Imagination
"My friend is looking for a Pepper Smith he served in the army with, was ..."
Christine Budnack The Love Song of Pepper Smith
Browse Our Archives
get the latest from
Catholic
Sign up for our newsletter
POPULAR AT PATHEOS Catholic
1