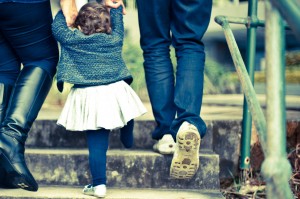 These aren’t the only examples of adoption as questionable entertainment. Despicable Me, The Jungle Book, and Juno, all present varying levels of cringe-worthy plot points and lines.

So why didn’t I consider this risk when buying tickets to see a student production of Annie, Jr.? In my enthusiasm to support my friend’s kids and hear “Hard-Knock Life,” I didn’t consider the obvious subject matter–and our adopted seven-year-old son’s reactions.

But as soon as the curtain opened and a young couple left a baby on the doorstep, I stiffened. Samuel had never been orphaned. Still: what did he think and feel, when the mother kissed the baby in the basket and walked away?

Soon, the hero–the adoptive parent–comes through. Daddy Warbucks lives in a mansion and provides Annie with servants and beautiful dresses. Isn’t this any child’s dream?

However, Annie never forgets the people who left her on Miss Hannigan’s doorstep. She craves that biological connection.

At one point, she cries to Mr. Warbucks for her “real” mom and dad.

Real. I hear the term frequently from people who mean no harm, but it implies I’m a stand-in, a babysitter, not a flesh-and-blood mother. And by flesh and blood, I mean feeding his tummy and cleaning out his ears, taking him to the emergency room when he splits his forehead in a fall.

My husband Jeremy nudged me. We knew we couldn’t let “real parents” go as our second-grader strained his neck to see what would happen next.

We knew we’d be a slightly different family after the curtain closed.

Samuel has known his entire life that we adopted him at two days old. His birth mother, Hannah, chose our family from a stack of portfolios when she was seven months pregnant, and we met twice before her due date.

At the hospital, I met the biological father, who I’ll call Jake, briefly. Quiet and understandably awkward, he hid behind a dark curtain of hair.

From that point forward, we’ve seen Hannah and her parents several times a year. My husband has backpacked with Hannah’s father, and I’ve traveled with her mother. Just this spring, Samuel sent Hannah Flat Stanley his class project.

Hannah’s family considers all five of us, including our biological daughters, part of their own. Yet there is no question that my husband and I are Samuel’s mom and dad.

Jake is a different story.

There hasn’t been much involvement since the birth, though Jake’s presence at the hospital was itself, according to our social worker, a rare occurrence. A picture of him sitting with Hannah and newborn Samuel in the hospital is a powerful addition to the baby book.

Samuel, Hannah, and Jake met up at a McDonald’s a couple of years ago, Jake marveling at his mini-me’s disappearing, smiling eyes.

There was no point in explaining Jake’s role to Samuel, though, for my son hadn’t yet learned the facts of life. He knew he’d grown in Hannah’s tummy, not mine, but had no idea how he got there.

Concerned about how Annie, Jr. would influence Samuel’s view of his place in our family, my husband and I decided to open a conversation on the way home.

“Samuel, who are your real parents?” my husband asked.

“Um, you and Mom.” He kicked the seat, and I shot him a corrective glare.

Jeremy peered in the rearview mirror. “So what did Annie mean when she talked about her ‘real’ parents?”

“Yes. Like Hannah,” I said. “She carried you and gave birth to you. That’s very important in her life and in your life.”

Jeremy continued: “Sometimes people use the word ‘real’ when they mean biological. But we don’t use that word because it’s not quite right.”

Jeremy reached back and patted Samuel’s leg. We looked at each other and shrugged: That was easy.

Of course, we hadn’t talked about the social implications of “good” parents having money, or adoptive parents “saving” children from despair–as if adoption were a good deed and not a complex, multidimensional manner of forming a family.

But we were happy to quit while we were ahead. After all, Samuel was just shy of eight.

I glanced at Jeremy. What did Samuel know about babies getting made? And what about the rapt audience of two giggling older sisters in the car?

“So…” I started slowly. “You remember that guy you met at McDonald’s? Hannah’s friend Jake? That’s your birth father.”

“Yes. He wanted to be there when you were born.”

Although I’m not friends with Jake on Facebook, I’ve occasionally browsed his photos to show my close friends. This time, I showed them to Samuel.

“You look just like him,” I said, pointing to a scrunchy smile.

“I don’t have a beard!” he shouted. Then he took my phone and looked more carefully. “Actually, yeah. He looks like me.”

Jeremy glanced in the rearview mirror again. “Maybe we can see Jake again. At McDonald’s.”

“What happens when astronauts fart on the moon?”

And so the birth father reveal was complete, the first of many conversations to come. But for now, Samuel had an answer that made sense and he’d remained himself while taking a major step forward.

When I told Hannah about the conversation, she texted Jake, who, delighted, expressed interest in planning another get together. Then, abruptly, like his biological son, he switched topics.

Parenting is always a balance between protection and risk. Had we decided to shield Samuel from the awkwardness of Annie Jr., we wouldn’t have had the discussion–yet. In fact, it was because Samuel saw both a man and woman leave the baby that the concept of a birth father clicked.

Adoption, like many life events, is a process of confusion, discovery, pain, and joy. The sun will come out tomorrow. Or maybe the rain. And we’ll take it as it comes.

Image above is by Kat Grigg, licensed by Creative Commons.

June 3, 2016
“Translation Back into Native Tongues” by Nicholas Samaras
Next Post

June 7, 2016 A Letter To My Sister
Recent Comments
0 | Leave a Comment
""It doesn’t matter when you start the Sinatra Christmas playlist or put up your tree. ..."
C_Alan_Nault How to Win the War on ..."
"Yup."
Max Marvel Finding My Inner Calamity Jane
"I an confused by the use of "aural" here: "In The Gutenberg Galaxy, he explained ..."
William G II The Gutenberg Imagination
"My friend is looking for a Pepper Smith he served in the army with, was ..."
Christine Budnack The Love Song of Pepper Smith
Browse Our Archives
get the latest from
Catholic
Sign up for our newsletter
POPULAR AT PATHEOS Catholic
1