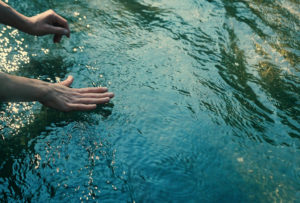 I’ve always found the ghazal form intriguing. Its couplets, all discrete, are linked by  a phrase repeated in each couplet’s second line. The changes rung on this repeated phrase are where much of a ghazal’s action takes place. In “Ghazal: Woman at the Well,” Carolyne Wright takes “the woman at the well” as her repeated phrase—the Samaritan woman whom Jesus asks for a drink in John 4:1-42. At first the poem stays fairly close to the biblical story, though the initial question—“who is the woman at the well…?”—hints that further exploration of her identity will follow. And it soon does. In stanzas 7-8,  we see her longing for a land that isn’t drought-ridden, as Samaria is: she dreams of “oases of date palms” and of “pomegranate flowers.” Then the poem stretches her identity further. As “on the night of destiny, the angel Gabriel descends,” we wonder if the woman at the well is Mary. Next the woman is on the bottom rung of Jacob’s ladder, reaching toward heaven (from Genesis 28:10-19). Then she shares the features of women both of Sychar (in Samaria) and of Shechem (in Israel); these two peoples did not associate with each other, so Wright’s woman, somewhat like Jesus here, is effecting a reconciliation in her very body. Finally, all these women share a fate mirroring the woman at the well, even becoming her “second self.” (Wright ends by honoring Agha Shahid Ali because he was the poet to introduce the ghazal form to Americans.)

“Ghazal: Woman at the Well,” by Carolyne Wright

Millennial fissures in the well-rim, weed-choked cracks
where brackish water rises for the woman at the well.

At the bottom of the well shaft, the sky’s reflective eye
opens, closes on the shadow of the woman at the well.

Where are the rains of bygone eras? Preterite weather
yields more rusted bucketsful for the woman at the well.

Ancestral well of Jacob, where a weary traveler rests,
where Jesus asks for water from the woman at the well.

Oh plane trees of Samaria, in whose shade a stranger
speaks of artesian fault lines to the woman at the well!

Chaldean fountains, oases of date palms and minarets—
how they flourish in the dreams of the woman at the well!

Mirages of marble, pomegranate flowers, cedars of Baalbek
shimmer in the sight of the woman at the well.

On the night of destiny, the angel Gabriel descends
and hovers by the footprints of the woman at the well.

Jacob’s ladder leans against the door of heaven—
on the bottom rung, the woman at the well.

Women of Sychar, women of Shechem! Draw aside your veils,
reveal the features of the woman at the well.

Wise ones, why do you weep? Do you fear your fate
tips a mirror toward the woman at the well?

Oh artisan of sorrow, mystery’s precision, sit down
beside your sister, second self, the woman at the well.

Carolyne Wright’s Seasons of Mangoes and Brainfire, winner of the Blue Lynx Prize and the American Book Award, appeared in a second edition from Eastern Washington University Press and Lynx House Books in 2005. Her new collection is A Change of Maps (Lost Horse), finalist for the Idaho Prize and the Alice Fay di Castagnola Award. She teaches for the Whidbey Writers Workshop MFA Program and the Richard Hugo House in Seattle, and serves on the AWP board of directors. 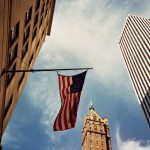 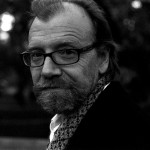 March 6, 2017 An Interview with George Saunders, Part 1
Recent Comments
0 | Leave a Comment
""It doesn’t matter when you start the Sinatra Christmas playlist or put up your tree. ..."
C_Alan_Nault How to Win the War on ..."
"Yup."
Max Marvel Finding My Inner Calamity Jane
"I an confused by the use of "aural" here: "In The Gutenberg Galaxy, he explained ..."
William G II The Gutenberg Imagination
"My friend is looking for a Pepper Smith he served in the army with, was ..."
Christine Budnack The Love Song of Pepper Smith
Browse Our Archives
Follow Us!