The Sweetness These Days 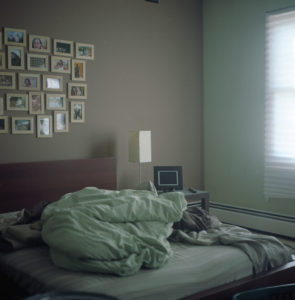 On the phone, he says, Your mother throws me over her shoulder and carries me across the parking lot to the club house, the dining room. (She rolls his walker to a corner of the dining room where it won’t obstruct the servers and other residents who have come tonight for dinner.) His sense of humor: alive and well. We’re flying now, he says.

You’re lucky. There are telephones now. Telephones spare you from the worst of the damage distance can do when, for decades, you live far from them, your parents. Telephones keep you close, ear to ear. They pare the body down to the voice. How was your day? Meatloaf? Jeopardy? Where are you now? The conversation: almost always brief. Nothing new here. Nothing new here. Good, then. You’re on the same page. It hasn’t turned yet.

Is it love or fear or both that raise the receiver to your ear at almost the same time every day on your ride home from somewhere? Is it the desire to go back to the beginning of the story or even further to before the story of family began, this family in particular, mother and son, father and child? Or is this the way you say goodbye, goodbye, thank you for everything, thank you for this wondrous life, with every call, every daily call?

Does he know anything yet (your son, their grandson) about when he’s moving? When are you coming to visit?

You visit as frequently as your life apart from them allows. (Are you ever apart from them, no matter how active, demanding, rich, focused, defined, old your own life, 600 miles away, is?)

When you are there, if your eye twitches, she leaps from the sofa to get you a cold compress. She cares for you. She wants to take care of you. He tests your knowledge of actors, now those in “Bad Day at Black Rock,” now those in “High Noon.” It’s not a test. He just wants to share his love of classic movies with you. TCM plays loud for an hour or a scene before the remote commands the screen to find another scene in which he’s interested. The game. The sixth inning. Relief pitcher. About two of the worst performing teams in the league, this late in the season, he says, neither team is going anywhere.

Once they took him everywhere he wanted and needed to go: his legs. Now they get in his way, their way. When, from deep inside his black leather chair, he calls for ice, she brings him ice, one cube, as requested. She’s healthy, strong. And aside from the body in which he’s confined, his mind is almost as sharp as ever. They’re lucky to have each other.

But at times they are sharp with each other, call and react, react and counter-react. They are in a groove, a kind of groove, not exactly a “feelin’ groovy” kind of groove. It’s the kind of groove any body, any two bodies who have made it this far, together, might find themselves in.

What’s changed since your last visit? There have been a couple of hospitalizations, but he’s home again now, stable, as comfortable as he can be when seated in his chair or lying in bed. Not so much when he’s on the walker inching himself around.

She’s as dutiful and dependable a caretaker as she’s always been. A glass of milk, he says, and she’s complies, rising from the couch, disappearing into the kitchen for a few moments, returning with a tall glass of half-white, half-chocolate milk.

Letting go of the rails of the walker, he falls backwards into a chair, trusting it’s there to break his fall. Upright or prone in bed, the pain. She lives with it, too. They’re side by side.

The sweetness these days is in the faces of the grand- and great grandchildren, the grand- and great grandnieces and nephews, brought into their living room in almost real time thanks to her drive to keep up with the times, to Facebook on her iPad. The sweetness is in the play, the friendly competition with dear ones, old and young, the primary way she stays in touch with them now: Words With Friends. You’re there beside her as she does.

The sweetness tonight is in the seventh inning when the beloved home team drives a ball over the farthest fence and the runner rounds the bases and his spiked foot touches home. The television blares with cheerful news, a little celebration, a little joy. You’re there with him, filling with hope. Top of the next inning, the opponent doubles, steals third, and is driven home to take the lead again.

He lies on his side in bed. Head anchored on the pillow. Looking at you. Your mother’s good to me. It’s hard on her, he says. You’ve seen it.

Despite the understandable tension and strain that comes from their worlds having become narrower, they still agree on a few important things: their love for their children, their love and hopes for their grandchildren and great grandchildren. And quality TV: “Law and Order,” one episode after another to get them through the night.

Richard Chess is the author of four books of poetry, Love Nailed to the Doorpost, Tekiah, Chair in the De-sert, and Third Temple, all from University of Tampa Press. Poems of his have appeared in Telling and Remembering: A Century of American Jewish Poet-ry, Bearing the Mystery: Twenty Years of IMAGE, and Best Spir-itual Writing 2005. He is the Roy Carroll Professor of Honors Arts and Sciences at the University of North Carolina at Asheville. He is also the director of UNC Asheville’s Center for Jewish Studies. He is also the Chair of UNC Asheville’s English Department. You can find more information at www.richardchess.com

Above image by Ben Seidelman, used with permission under a Creative Commons License. 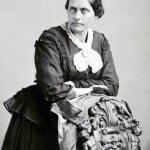 August 22, 2017
Susan B. Anthony: Failure is Impossible
Next Post 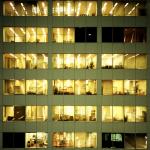 August 24, 2017 Global Neighbors
Recent Comments
0 | Leave a Comment
Browse Our Archives
get the latest from
Catholic
Sign up for our newsletter
POPULAR AT PATHEOS Catholic
1