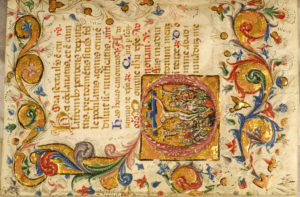 Dan Murphy has written a series of poems inspired by medieval miniatures: those marvelously detailed paintings crammed full with colorful life. In this poem, Murphy uses the miniature of Christ’s Entry into Jerusalem to multiply images for our human need to reach for the beyond. I love the variety of these images: someone climbing a tree (“half- / Way marker of earth and sky”); “human form / As flag announcing spirit through / Flesh”; the boy reaching “for a bird or palm”; “The top part of the tree where branches break / Into leaves.” Then a very different, astounding image follows: the gate to Jerusalem through which Christ will enter becomes “the mouth / Accepting the body of Christ.” The poem closes with Christ’s gesture in the painting: his open hand, traditional gesture of blessing. Murphy has the gesture speak Christ’s own paradoxical words from atop the donkey, days before his Crucifixion, ending with “I bless this world that brings me death.”

The painter has left a whole corner empty, squeezed
the painting into the top half of a diagonal. How
gently they lay His body, His face crooked

from pain. Nicodemus lifts Him below the knees.
Joseph of Arimathea fixing the shoulders
to rest, his chin holding Christ’s haloed

head steady. Four sainted women form a back
row; they look on with sharp black pupils
to make sure that this is the tomb, this

the body, this the Lord. Blood runs bright red
from his wrists’ nail-wounds, one hand on Mary
Magdalene’s shoulder: this act the first

intransitive verb to bear the sign that flew
across continent and sea, brought to so many
hope, death to so many.

Dan Murphy has had poems published in Field, The Beloit Poetry Journal, Chaparral, Image and The North American Review. He was a semi-finalist for the 2013 First/Second Book Prize from Tupelo Press and for its Sunken Garden Chapbook Award in 2014. His chapbook, The Book of False Rhyme, was published by Finishing Line Press in 2013. 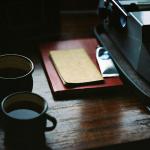 September 14, 2017
Why I’m Writing a Death Penalty Book for Teens
Next Post 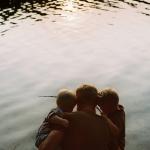