In Praise of Albuquerque 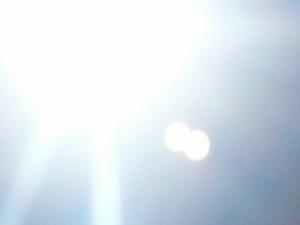 We walked slowly down the side of the block that had the shade. I was rolling my stupid suitcase along behind me, like a child’s toy gone bloated and unwieldly. Jim was also carrying a bag, but his was better. It was absolutely dry and it was absolutely hot. We’d only been in the sun for about ten minutes but Jim’s lips had already cracked and fallen off.

I saw a man on the corner. And then the man darted away and disappeared. He melted into the shadows of a building entranceway. A single car passed and was gone. The traffic light changed, but there were no cars at the intersection, no cars as far as the eye could see. We stood at the corner waiting for the light to change anyway. Then Jim started to cross against the light. He just did. So I did too.

We walked two more blocks. A man stood at the center of the next intersection. He was holding an empty plastic cup and wore a black T-shirt long as a dress….dusty shoes. He was veering dangerously to his right. Two cars suddenly appeared from opposite directions and eased their way around him. He leaned toward the one car when it passed on one side, and toward the other on the other. He was a teetering, drunken, car magnet. He continued to stand in the intersection watching us as we walked. He glared at us with both eyes separately.

The sun inched even higher into the sky. The sun wasn’t moving latterly, just up, up, up.

We heard the voice of someone yelling, and then we saw him. He was coming right at us, but then he wasn’t. He stood on spindly legs that had lost the ability to bend at the knee, seemingly. He gyrated around at the top half, swaying like a new kind of palm. “Motherfuckers,” he said, in a preacher’s voice. “And the agenda,” he went on, “the same sex agenda.” His voice trailed into a mumble, disconcertingly loud, bouncing from one side of the street to the other but impossible to understand.

As the preacher droned on, another human-sized figure scampered into a doorway behind us. We trudged forward. The sun shifted up another register.

On the next block, there were five dead bodies lying on the sidewalk. Then one moved, swatting at a fly. A tiny cloud of dust went up where the hand landed. The bodies were too dusty to be boys or girls. They were lying on the sidewalk beyond gender, beyond life. Beyond death.

“Howdy,” Jim said as we passed. “Howdy,” answered the dust.

We moseyed along to the entrance of our hotel, another few blocks away. The park across the street was peopled. A woman was crouching on the ground grasping a metal trash can with both hands and wailing, moaning. Or maybe she was singing. Her long neck curved up toward the trees. Three women huddled around a man sitting regal on a bench. They picked and groomed at him and he shook his giant jowls in approval.

A younger man stood and shuddered nearby. He walked in circles. He was sniffing at something stuck in his nose, which may or may not have been there. He stopped and rested his head against a dying tree, speaking things only the tree could hear. He bowed and scraped at the bark in his arboreal worship.

A few feet away, a woman pulled her pants down abruptly and squatted in the dust, her stream hitting the ground with surprising force. Seven people slept soundly in a pile to her left as she peed.

The next morning, Jim awoke, pulled the drapes aside, and found out that the sun hadn’t moved an inch from the center of the sky. We walked outside and wandered over to the church, joining a line of wanderers. We tucked ourselves into a pew and looked up. There she was, a giantess in mosaic form, Mary of the Immaculate Conception.

The priest uttered words for his homily. I wasn’t listening. I was watching her. So thin, stretched out almost into the abstract, drifting to the very edges of our world and out into the Platonic realm of pure form, the absolute ground of the possibility of all shape, all form of any kind.

And then her face. Human but not human. Angel but not angel. Beyond, but also somehow right here. Her face, mesmerizingly in rhythm to the rhythms of the liturgy of the Mass. “Holy Shit,” I said to myself, because it was a miracle.

Then we got on a train to Sante Fe. We passed the corpse of a borough that’d died along the side of the tracks. Its legs were sticking straight up toward the sky in rigor mortis. I looked up, following the line into the sky traced by the dead, hardened limbs.

The sky was dark with rain clouds above the rim of the mountains along the horizon. A great flash of lightning exploded against the blackening sky. “I’ll be damned,” I whispered to myself and then closed my eyes for the remainder of the trip.

Morgan Meis is a contributor to Page Turner at The New Yorker. He has a PhD in Philosophy and has written for The Smart Set, n+1, The Believer, Harper’s Magazine, and The Virginia Quarterly Review. He won the Whiting Award in 2013. Morgan is also an editor at 3 Quarks Daily, and a winner of a Creative Capital | Warhol Foundation Arts Writers grant. He is the author of Dead People, with Stefany Anne Golberg. He can be reached at morganmeis@gmail.com. 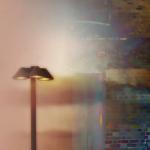 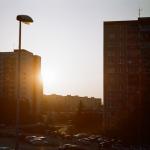 March 9, 2018 Poetry Friday: “Early Morning on the B Line From Vero Beach to Orlando After a Poetry Festival”
Recent Comments
0 | Leave a Comment
Browse Our Archives
get the latest from
Catholic
Sign up for our newsletter
POPULAR AT PATHEOS Catholic
1