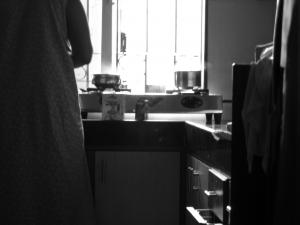 We sang it, too. In 1961, Mr. D taught our fourth grade music class folk songs belonging to our American musical heritage. I still know all the tunes and most lyrics to “Shenandoah,” “Ol’ Dan Tucker,” “Erie Canal,” “Sweet Betsy from Pike,” “Barbara Allen,” “Red River Valley.” And the minstrel song, “Shortnin’ Bread.” Complete with disturbing racist dialect: “Momma” was not the word we learned.

Dick Allen uses the song’s lyrics (set off in italics) to structure the first three sections of the poem: the speaker’s musings on the origin of the song, hearing the song in childhood, and a child’s belief in the miraculous. The racism of the song’s language acknowledged, the speaker focuses on his experience of real shortnin’ bread (“the bread itself”), rich in ingredients and delightful to the senses. The real bread still feeds the speaker’s memory.  The song, on the other hand, belongs to a landscape of unthinking prejudice and a child’s belief in miracle cures, in good luck, in world peace, and in a body that will never die, based on evidence in nature and answered prayers.
The poem shifts to an alternate consideration (also set in italics) of what constitutes the “miraculous.” The lines, “thousands upon thousands of small escapes/from horrible outcomes,” contrast song lyrics that describe the fictitious miracle of bedridden children popping up “well to dance and sing” after eating shortnin’ bread. The speaker then describes a real child, sick in a real bed: the brother who survives a potentially serious infection. A “small escape,” a “reprieve” that may be explained by the care of a nurse who stays awake all night at the boy’s bedside, but, nevertheless, a blessing.
A final quotation from the song redeems its “appalling” lyrics, landing the poem on a positive note as it introduces the smells associated with the speaker’s memories of real coffee, real lilacs, and real baked bread. “Shortnin’ Bread” invites its readers to examine what we were taught in Mr. D’s music class long ago, to relish what is life-giving, and to invoke the blessedness of the ordinary: a real mother singing while she makes coffee to celebrate the recovery of her son.

The lyrics were appalling. Three little children lying in bed,
two were sick an’ the other most dead
and how the song, written by James Whitcomb Riley
in racist dialect, became a minstrel song.
Yet the bread itself was wonderful: cornmeal,
flour, hot water, eggs, baking powder, milk,
a good deal of shortening. My mother used to sing
Momma’s little baby loves shortnin’, shortnin’
Momma’s little baby loves shortnin’ bread
all morning while she whipped up some,
wearing her white apron with the red stitching,
and I never tired of hearing about how
when those children, sick in bed
heard the talk about shortnin’ bread
they popped up well to dance and sing
for I believed, then, like other children from our small church village,
in miraculous cures. I believed in the luck brought by four-leaf clovers,
that men actually beat their swords into ploughshares,
and in the resurrection and the life.
Didn’t seasons change, weren’t prayers always answered?
One day it was snowing like the devil, the next,
robins came to our upstairs bedroom windows,
sheep gamboled, the lilac bush blossomed.
Behind us, trailing back through our lives like drunkards’ footsteps
there are thousands upon thousands of small escapes
from horrible outcomes. Be thankful for each reprieve
with which you’ve been blessed.
My brother who’d stepped on glass and got himself infected
didn’t die in his trundle bed beneath the stairs.
The nurse who’d stayed all night awake by his bedside
had left quickly in the morning, smiling, reassuring us,
while downstairs my mother had started singing,
That ain’t all she’s gonna do
Momma’s goin’ to make a little coffee, too,
the house on Janes Avenue filling with the smells
of coffee and lilacs and delicious shortnin’ bread.

Dick Allen received his M.A. at Brown University, winning the Academy of American Poets Prize. His poetry collections include the pop epic Anon and Various Time Machine Poems (Dell), Regions With No Proper Names (St. Martin’s), Overnight in the Guest House of the Mystic (L.S.U., an N.B.C.C. Award Final Nominee), Flight and Pursuit (L.S.U.), Ode to the Cold War: Poems New and Selected (Sarabande Books; the runner-up for the W.C. Williams Poetry Award ), and 2003’s The Day Before: New Poems (Sarabande Books). 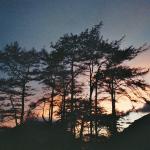 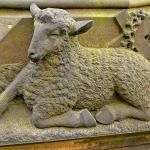