Here Is Where We Wait 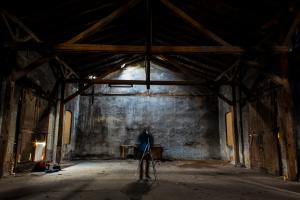 This summer, I climbed the rotting steps to the hayloft of my family’s barn to look for a plaque honoring the use of emergent DNA technology in solving the Brown’s Chicken Massacre case. The floor was soft, dipping a little as I walked, and I looked in slow motion through my great-aunt’s things: frosted glassware, ceramic roosters, romance novels, and Bible after Swedish Bible.

The plaque hung in my great-aunt’s home after her daughter, Barbara, received it from the Chicago Police Department; after my great-aunt died, it was stuffed in a box and moved to the hayloft.

When I’m in the hayloft, I remember God, who is easy to forget. At least this is true for me; I’ve always believed in God but also feel the reminder of him to be jarring. I needed set places to pray as a child, places that were solitary and fixed and haunted by God in ways recognizable and palpable.

The air hung in the loft, suspending small sharp pieces of broken straw in mid-flight. Light beamed in a small opening where the massive sliding front of the barn strained to meet the eaves. Thresher blades hung like a wide pendulum over stacked bales of straw, where my cat and I would gaze up at the light and its sharp world as if the sharp world was God.

I met Barbara in 1995, when she visited from Chicago. I was 15, obsessed with DNA after having seen Jurassic Park, and excited to talk to someone who used it to solve crimes. I didn’t know that she was carrying around the memory of the Brown’s Chicken Massacre, or that she was frustrated by the fact that she couldn’t solve it. The answer was right in front of her eyes, but the tools wouldn’t be available for another decade.

Barbara was a forensic scientist with the Chicago Police in 1993 when two men killed the owners of a Brown’s Chicken restaurant along with five people eating dinner. As Fargo‘s Marge Gunderson would say, all for a little bit of money.

The men ate dinner before killing everyone, and it’s this that always gets me, the something sacred and lovely that exists in the words “chicken” and “dinner.” Of course people should always be safe, but they should be especially safe when they’re eating their dinner, and I think this is what affected Chicago most strongly about the massacre, what made the crime snag in Barbara’s brain. I recently read an article about the murders in which it was clear that people still remember, still say that the building is haunted, still won’t go near the place.

When I prayed in the hayloft, I’d stare at oak leaves through the eaves, knowing that there was far more to them under their surface, that active code writing and deleting and selecting under the surface. The more I learned about DNA, the more I saw the world as the Eucharistic “accidents”—a bit of surface fakery with more underneath than I could know. The essence of things as unknown and secretive. I learned I could look at the world not only to see and understand God, but to love God, and isn’t love always a little accidental?

One of the Brown’s Chicken killers ate a chicken breast before he ended the lives of seven people, and Barbara kept the breast in a Chicago PD freezer for nine years. There were buccal and a few white blood cells from saliva on the chicken, but no technology to say whose cells.

I want to say that Barbara had faith, but really, she just waited. Waited for the technology to catch up, waited for her ability to see what she knew was there the whole time. Waited while the suffering of all those people eating their dinners piled themselves inside her, all her hope latched onto a frozen piece of chicken.

In Kelly Grey Carlisle’s essay “A Goodly Heritage,” she writes, “Sometimes I think that when God said, ‘Let the earth bring forth the living creature after his kind,’ and when he said, ‘Let us make man in our image,’ what slipped from his mouth were not words as we understand them but, instead, that ancient, inscrutable language. Adenine, cytosine, guanine, thymine, swirled together in their double-helix, slipping like a silver chain from His mouth to the earth into the cells of whatever primal form evolved into us.”

The more I write and think about God, the greater distance from God I feel. Sometimes I think it’s just my inability to recognize him, or to have a space sufficiently haunted enough to pray. So I look at things—all the accidents covering the essences—and that creates love, and that creates haunted space.

A good scientist knows that if she can’t find a solution, the problem lies with her—her inability, her lack of tools—and she waits, and she gazes, and she carries the problem around with her.

A few months after Barbara and I sat around my great-aunt’s table eating herring and talking about DNA, she called with a request: She wanted cheek swabs from me, my sister, and our dad. We didn’t know why she wanted them at the time, but she likely wanted to see if she could do it: get enough genetic evidence from saliva to, if not identify, at least provide some information about its source.

Barbara responded weeks later to say that we shared a mutation, but one that she couldn’t identify. My dad, sister, and I occasionally point to our forearms, to a place so small its architecture can be mapped only by the wet of our cheeks smothered into a vial. We grin and say, “Here is where we are the same. Here is where we watch and wait to see what will happen.”

This post originally appeared at Good Letters on December 2, 2015.

Natalie Vestin is a health scientist and writer from Saint Paul. Author of an essay chapbook Shine a Light, the Light Won’t Pass from Miel Books, Natalie’s essays have appeared in The Normal School, Iowa Review, Prairie Schooner, Good Letters, and elsewhere. 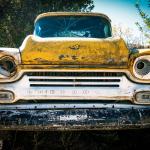 August 6, 2018
Can a Racist Drive a Prius? Stereotypes and the Single Story
Next Post 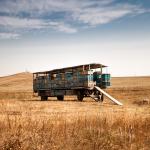