GrowBaba spotlights provide a space for Muslim fathers to share their voice, reflections, and insights with our community. 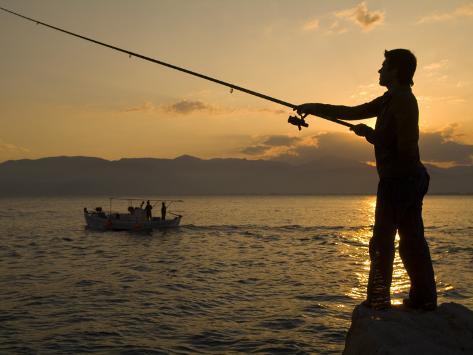 Not unfamiliar words to parents of an 18 year old. This time he’s off for some solo evening fishing. You see on this particular day, the Islamic holiday Eid, we offered each of our three kids their choice of how to spend the evening since the first half of the day was spent at prayer and with our extended family. The younger two chose to stay home and play with their gifts. Innocuously, I figured why should our oldest not go fishing if that was what he wanted. Later, once he was out, my 18 year-old’s otherwise routine departure hit deep into this father’s heart: How dare he do that to me, and especially on Eid day.

Rewind to 17 years ago. My wife and then toddler son flew off for the summer to visit my in-laws. She’d gone without me before, but this was a new-dad’s first time away from his first born. My coworkers later told me that my demeanor and spunk at work took a nose dive that summer. Eventually, out of compassion for my misery, they took me on my first ocean fishing experience. The ocean, they said, would take my mind off of my son. They taught me how to fish; I fished a lot that summer. Eventually when my wife and son returned, I confessed to my dear wife, “I think I must love him more than you, because between the two of you, I absolutely missed him more…but now I can fish.”

As my son grew, he and I went fishing together countless times. It was precious father-son time that I wouldn’t trade in for the universe. But over the years, it turns out –as I painfully discovered on Eid– that my now-18 year old son has actually learned how to fish. Solo.

So for anyone else out there inspired by what our beloved prophet Jesus said, “Teach a man to fish…” I’m breaking it to you guys: teach them how to fish… and they’ll soon be fishing without you!

That’s supposed to be a good thing folks, and in my mind I know it is. In my heart, it really hurt to see him go off fishing without me. I felt selfish…parents are supposed to be giving. Then I felt proud…he’s old enough to go fishing on his own. Then I felt betrayed…how dare he take a precious gift we shared and claim it as his own. Then I felt like I had done the right thing. For the rest of the evening, I oscillated between simply feeling crazy and missing him precisely as much as I did that first time he took off for the entire summer.

I had not anticipated that sensation 17 years later as life cycled me back to that same moment and that same desperate sinking feeling of having a piece of your heart ripped out even if your brain knows it is temporary.

My brain and heart were at war that entire evening: Is this the harvest of our fishing or parenting efforts—to miss your kids? Is this why we teach them so much—so they leave us? Is this the result of our love for them?

It took me a while to sort through it all, but I think I figured it out.

I cannot control the solid fact that he now truly needs to go fishing on his own, and I cannot always be part of where, when, how, or what he fishes any more. So what’s left for me to focus on is what will never change: the unbreakable line that the past 18 years has cast between my heart and my son’s. Dear God, grant me the wisdom to always treasure my line.

So the next time the line tugs a little and hurts me, I will treasure the fact that the tug itself is simply a reminder that the line is still there.

“And hold fast, all together, by the rope which Allah, and be not divided among yourselves; and remember with gratitude Allah’s favor on you; that when there was enmity between you, He created affection between your hearts, so due to His grace you became like brothers to each other,” Quran 3:103.

Yaman Kahf migrated to the US as an infant with his parents. He is the second eldest of 7 siblings, growing up in Utah, Indiana, and New Jersey before settling in southern California with his wife and three boys. Yaman’s MSA days and bachelors are from Rutgers University, NJ. He holds an MBA and works in the field hospital patient financial services. Yaman is currently active with the MAS-Greater LA chapter.

“I Can’t Breathe”, A Call to Action
As he pleaded for his life, "I can't breathe", another innocent African...
view all Muslim blogs
What Are Your Thoughts?leave a comment
Copyright 2008-2020, Patheos. All rights reserved.