There’s a Used Condom on My Door Handle: Hate Crimes and the Burden of Proof

Friday morning started like any other school day: the kids and I got up, quickly got dressed and had breakfast before rushing to the car to drive to school. When I distractedly grabbed the handle of the car door, I felt something odd at my hand. I stared at it for a couple of seconds. Was it a balloon? Was it a glove? No. It was a used condom with semen inside!

It took all my willpower not to scream or throw up and instead calmly wash my hands (numerous times!!) and then concentrate on driving the kids safely to school.

After dropping my son off, I called the Toronto Police. Because I am visibly Muslim—I wear the hijab—I had reason to believe that it was a hate crime. However, the police thought otherwise. With a lighthearted tone, the officer told me that it must just be some jackass having fun. She said there was no need for anyone to come check out the scene. I protested that this incident made me feel unsafe, especially because I have young children. But she said there was nothing they could do to help me. I told her that we’ve had our tires slashed in the same driveway numerous times, but she said that since we hadn’t reported it, there was nothing further they could do.

I sat on her answers for a few hours and feeling unsatisfied, I called again. This time I was firmer and directly requested that someone come to the scene. Someone had trespassed onto my property and left potentially hazardous biological materials. I wanted it checked out. This time the officer I spoke with complied and said he would send someone.

By 6 pm, the police had yet to arrive. I called back and was told that my case was a low priority. They could not give me an ETA. It may be pushed to tomorrow, he said. He concluded that there was nothing further he could do.

Late that night, around 10:30 pm, a sergeant called me. He said that my story didn’t warrant a visit from the police. Instead, he gave me a non-emergency number to call. He said to report the incident there and then call 311 if I wanted the biological waste removed by someone else.

I told him that as a visible Muslim with two very young kids and a third on the way: this twisted “fun” made me feel extremely unsafe. I also said that my husband was a lawyer and when he talked to his criminal law colleagues, they told him to tell the police to take the DNA from the condoms so that if the perpetrator returned and left further DNA, the samples could be connected. But the sergeant answered that they only collect DNA if there was a break-in or assault with DNA left behind. He also said that it’s not a hate crime unless there’s a swastika, for example. He said he was afraid there was nothing further they could do.

That night, I had to step out to the grocery store to order a birthday cake for my four-year-old son. Standing on my dark driveway, I felt chills run up my spine as imagined someone twisted enough to tie a used condom to my door handle trespassing onto my property or watching me that very moment. Whether or not it the disgusting “joke” was motivated by hate was irrelevant at that very moment: it is unfortunate that as a visible Muslim I felt that not only was there a good chance that someone wanted to hurt me but also that the police didn’t really seem to care if I felt safe. Why should I feel unsafe on my own driveway? Why should I feel worried that the crazy person who did this may do something more drastic next time? A simple check-in by the police department could have sent a message to whoever may have been lurking in the shadows waiting for a reaction. It made me sad to think that the police pretty much said they would only make an appearance once it was too late—once an actual break-in or assault occurred.

It made me sad that the burden was placed on me, the victim, to prove that the act was motivated by hate. What exactly proves that motive? Does it necessarily have to be a note or a “swastika”? Why was it left to the Chapel Hill victims’ devastated families to prove that their cold-blooded murders were hate crimes not a “parking dispute”—even though the perpetrator was a racist who had harassed the newlyweds in the past? Why was Nabra Hassenan’s brutal murder declared a road-rage incident by the police, while her heartbroken father argued in vain that she was killed because the wore the Islamic abaya?

So many questions left unanswered. 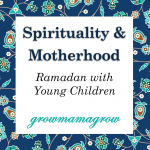 May 24, 2017
Ramadan "Spiritual High" With Children: Is it Possible?
Next Post 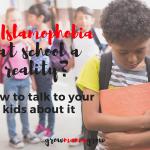 November 21, 2017 Is Islamophobia a Reality at School? How to Talk to Your Kids About It
Recent Comments
0 | Leave a Comment
Browse Our Archives
Related posts from Grow Mama Grow