A Desert at Home 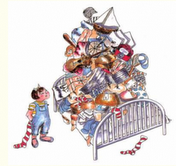 “Maryam, what do you want to take with you to Tata’s house today: your laptop or baby?” I asked my 1.5 year old. Yes, she already has a toy laptop and even though I consider her my baby, she already has a baby doll of her own. Today she chose the baby. SubhanAllah, she already has motherly qualities about her. She cares for its hat, gives it a blanket to sleep with, and pushes it in a stroller appropriate for both of their sizes.

Like many parents we want to provide our daughter with all the experiences she needs to be a well-rounded person inshAllah. Now that she has gotten older, I noticed that this includes occasionally buying Maryam the most interactive toys in the toy store as soon as she has became jaded from the latest of her tens of others. Most of the toys in our household are easily disposable in Maryam’s point of view as she has little attachment to them. What is worse is they are usually either battery operated or made of plastic, or both—eventually adding to the waste and rubbish that litters our planet. In reality, she still finds the mundane objects around our house that are repurposed for fun the most interesting. Building obstacle courses out of the couch cushions or helping me mix, pour, and eventually spill ingredients while cooking are some of her most exciting activities.

I know I still remember when “play-doh” was “play dough” made of flour, water and food coloring. Growing up there were no 24 hour cartoon channels, videos on demand on youtube, and many of the constant stimulations that children are now exposed to.  I worry that amid the myriad of ready-to-whateveryouwant items that permeate our lifestyle today, the childhood narrative will have forgotten what it was like to think creatively with the simple things we have.  How can we grant our children a reprieve from the stimulations and distractions that are so constant in our lives, and allow them room and space to think creatively?

My mother, for example, has relayed to me many warm memories of her unpretentious childhood in Palestine. She would fashion dolls out of swatches of leftover fabric, recycled newspaper, and hand spun wool. Toys such as tops were crafted from acorns that fell from Zarur trees. She would scour the countryside with neighborhood kids for a certain type of pure white dirt that when mixed with water made malleable clay. The clay would be molded in the shape of cups, plates, and spoons, baked, and then whimsically used in tea parties. She would set out with her parents to their nearby lands during the harvest, and pick up colorful wildflowers that were later used to extract brilliant colors for dyes and food coloring. Like most people in her village they owned orchards of olive trees. As a child, she strung together olive seeds to make treasured necklaces. What’s more is that all these items would be used until worn out. Today we would call this being eco-friendly.

There is yet another example of an austere upbringing in our lives, one that we are all familiar with. Our very own prophet (S) was raised in the desert, as was customary for children at the time. Perhaps it was appropriate since diseases were less prevalent there compared to Mecca where viruses could be transmitted from passing caravans. But in a world with as much diversity in its ecosystems as the diversity among its inhabitants, why did Allah (swt) in His infinite wisdom choose the desert as the best place to raise the final prophet (S)—the one sent to the entire world? I wonder now whether it was because being raised that way afforded the prophet (S) opportunities to think creatively with the few simple things he had. Perhaps the desert provided the blank slate onto which a child could paint the contents of his/her imagination.

I constantly make an effort to foster an environment free of frivolous amusements for my daughter. Many times this means more effort on my part to engage her so she can insha’Allah learn to be innovative, resourceful, and responsible.  In some ways I’m working to build my own desert right at home.

*Photo taken from http://aperfectplayroom.com/, which I came across after writing this post. Incidentally, it talks about some of the clinically found pros(cons) of limiting(expanding) children’s toy collections.

Dalal is a 4th year PhD student in chemistry at Princeton University, and a devoted mother to one gregarious toddler.

January 3, 2011 Shhhh….
Recent Comments
0 | Leave a Comment
Browse Our Archives
get the latest from
Muslim
Sign up for our newsletter
POPULAR AT PATHEOS Muslim
1