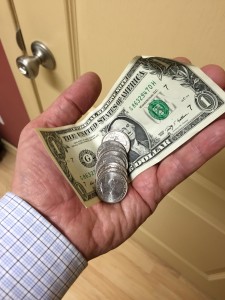 I take money from my children. I checked around and others do it too. You should try it. Seriously, you should.

Though there have been many with my older two boys, this was the first such incident with my youngest. Despite the slow taming of my internal torment from such incidents, I remain amazed at how intensely it still pulls at my heart.

You see, towards the end of our family’s attendance at a local carnival this past Saturday, my nine-year-old son asked to purchase a $3 toy. His request came after Pops here had spent a good 40 bucks on the family’s entertainment that evening. I reminded my son that in light of all the rides and games he’d already enjoyed, the toy was an “extra.” His puppy-eyed response was that he would pay for it once we got home, so I consented and made the purchase. He thoroughly enjoyed playing with the $3 toy that evening.

The next morning he walks up and hands me a one dollar bill and 8 quarters.

With payment in hand and my eyes peering in to his, my heart sank at the horror of actually taking money from my own 9 year old…albeit for a seriously junky toy which by the way ended up breaking later on that same morning.

As my eyes slowly zoomed out and I took in the expression of genuine contentment and pride on his face, something amazing happened: my spine started to grow back. Then I remembered, HEY I’VE DONE THIS BEFORE and it actually WORKS because it is the RIGHT THING to do.

YES, ALL CAPS!!! –because for some inexplicable reason, no matter how proven and logical it is, I still had to YELL AT MYSELF to in order to jolt the life back into my parenting which STILL turns to mush at one entrancing stare into my son’s eyes.

I can sit here and tell you that I learned this sage wisdom from the school of hard knocks with my older two boys; however that would be only partially correct.

I learned to do what’s best for my kids’ future –instead of my own gratification– because I have repeatedly reached out to other (especially older) dads who straight-up TOLD me what to do. You see, where the clear logic of this parenting task was not enough to support my spine, the addition of solid, proven, seasoned advice did the trick.

Indeed, those three dollars bought my son far more value than a junky toy. But what is even way cooler for me is that I now get to use that $3 to go out for coffee with my dad-friends to get even more advice! And so it turns out the village that’s helping me raise my kids actually pays for itself! So go take your kids’ money and savor that latte on me!

As a boy, Yaman never knew exactly what he wanted to “be” other than a father. He migrated to the US as an infant with his parents and is the second eldest of 7 siblings –growing up in Utah, Indiana, and New Jersey before settling in Southern California with his wife and three boys. Career and college degrees pale in comparison to the accomplishments, joy, and education from life with three boys.

April 6, 2015 Guilt- A Very Powerful Feeling
Recent Comments
0 | Leave a Comment
Browse Our Archives
get the latest from
Muslim
Sign up for our newsletter
POPULAR AT PATHEOS Muslim
1