Catholic Thriller Week: Valley of the Bones by Michael Gruber

I’m slipping this in under the “thriller” category but it is actually a mystery. Valley of the Bones by Michael Gruber is hands-down one of the most interesting books I have ever read in. Gritty and very Catholic, it is without the usual trappings found in a mystery. 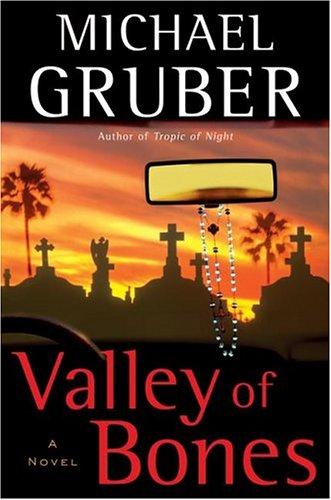 In Miami, a man is hit on the head and thrown from a hotel balcony. When the homicide detective, Paz, goes up to investigate, he finds a woman, Emmylou Dideroff, in the room. She is in a trance, speaking to St. Catherine of Siena, which qualifies her to the detective as both a wacko and a likely murderer. This seems confirmed when they find a bloody weapon on the balcony with Emmylou’s fingerprints all over it. She even has a likely motive but denies committing the murder. This is not as open and shut as it seems as Jimmy Paz pursues clues that lead to the international oil market, a FBI watch list, and missionaries in the Sudan.

Aside from the intricate mystery there is the spiritual factor. Emmylou claims to have communion with the devil which leads to her being put in a mental institution. At the detective’s request, she begins writing a confession. However, her confession is more along the lines of St. Augustine’s Confessions … and soon she is filling four notebooks with the story of her life. At this point we meet Lorna Wise, a psychiatrist who is determining Emmylou’s fitness for trial. Both Wise and Paz have actual moments of seeing the devil that Emmylou has mentioned but they manage to lie to themselves. Little doubt is left to the reader, though, that what they are experiencing is real. Strange personality changes start coming over Paz who is beginning to wonder if he is possessed and then shaking off the feeling. Obviously this is no ordinary mystery.

Along the way we see Wise’s various insecurities, Paz’s Cuban-American world and how he relates to the “white” world, insights into police detecting, how men and women relate to each other, and so much more. Most of all, there is a strong spiritual thread throughout that is interesting in itself as each character responds in their own way. This all is being told through four points of view: the detective, the psychiatrist, Emmylou’s confessions, and pages from the book Faithful Unto Death: The Story of the Nursing Sisters of the Blood of Christ by Sr. Benedicta Cooley. As I read further I am beginning to see that these are all showing various ways of conversion, of openness to God. This feeling is intensified when we meet Paz’s former partner, a strong evangelical Christian who is not afraid to share his faith. Most unusual for a mystery of this sort.

This may sound like a jumble of information but that is part of what makes this book so very interesting. The author is a masterful writer who makes everything come together naturally.

Make no mistake, it is a gritty, adult mystery and has sexual content that may offend some readers, most of which is in Emmylou’s confessions. I will add that any offensive content is relayed with such a lack of passion or detail that I didn’t find it bothersome.

March 19, 2012 Catholic Thriller Week Finale: Sons of Cain by Val Bianco
Recent Comments
0 | Leave a Comment
"Does the author ever state any actual evidence that they used to determine the validity ..."
Donalbain Night’s Bright Darkness – Review
"Your readers may also like my family history book called TURNER TREES by award winning ..."
KEITH POTT TURNER Book Review: Discovery
"I read Mockingbird maybe 30 years ago after seeing the screen adaptation of The Man ..."
Cheeky Bugger A Magnificent Book: Mockingbird by Walter ..."
"If you're at all interested in knowing . . . the Catholic Dogmas . . ..."
Vicki DePalma Book Review: Boxers by Gene Luen ..."
Browse Our Archives
get the latest from
Catholic
Sign up for our newsletter
POPULAR AT PATHEOS Catholic
1