Part 3: The Wedding at Cana and the Passion of Christ

Part 3: The Wedding at Cana and the Passion of Christ April 4, 2012 Julie Davis 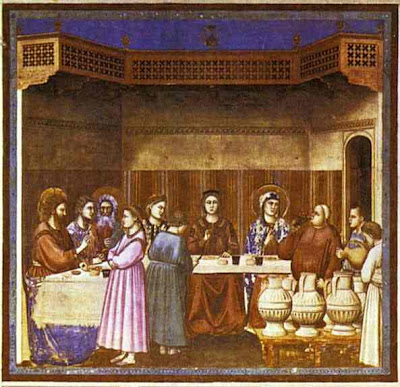 Continuing with  Fulton Sheen’s insights connecting the wedding at Cana and Christ’s Passion, death and resurrection.

At the Resurrection He gave Himself back to her, to show that while she had gained new children, she had not lost Him. At Cana the prophecy that Simeon had made to her in the temple was confirmed: henceforth, whatever involved her Son would involve her, too; whatever happened to Him would happen to her. If He was destined to go to the Cross, so was she; and if He was now beginning His Public Life, then she would begin a new life too, no longer as just the mother of Jesus, but as the mother of all whom Jesus the Savior would redeem. He called Himself “Son of Man,” a title embracing all humanity; she would be henceforth the “Mother of Men.” Just as she was at His side as He began His Hour, so would she be at His side at its climactic finish. When she took Him away from the temple as a boy of twelve, it was because she sensed that His Hour had not yet come; He obeyed her then and returned to Nazareth with her. Now, He told her that His Hour had not yet come, but she bade Him begin it, and He obeyed. At Cana she gave Him as a Savior to sinners; on the Cross He gave her as a refuge to sinners.

When He suggested that His first miracle would lead unerringly to His Cross and death, and that she would become henceforth a Mother of Sorrows, she turned at once to the wine steward and said:

Do whatever he tells you. John 2:5

What a magnificent valedictory! She never speaks again in Scripture. Seven times she had spoken in the Scriptures, but now that Christ had shown Himself, like the sun in the full brilliance of His Divinity, Our Lady was willingly overshadowed like the moon, as John later on described her.

Life of Christ by Fulton Sheen

April 3, 2012
Part 2: The Wedding at Cana and the Passion of Christ
Next Post

April 5, 2012 Part 4: The Wedding at Cana and the Passion of Christ
Recent Comments
0 | Leave a Comment
"Does the author ever state any actual evidence that they used to determine the validity ..."
Donalbain Night’s Bright Darkness – Review
"Your readers may also like my family history book called TURNER TREES by award winning ..."
KEITH POTT TURNER Book Review: Discovery
"I read Mockingbird maybe 30 years ago after seeing the screen adaptation of The Man ..."
Cheeky Bugger A Magnificent Book: Mockingbird by Walter ..."
"If you're at all interested in knowing . . . the Catholic Dogmas . . ..."
Vicki DePalma Book Review: Boxers by Gene Luen ..."
Browse Our Archives
get the latest from
Catholic
Sign up for our newsletter
POPULAR AT PATHEOS Catholic
1

Catholic
Part 5: The Wedding at Cana and the...
Happy Catholic Bookshelf

Catholic
Part 4: The Wedding at Cana and the...
Happy Catholic Bookshelf
TRENDING AT PATHEOS Catholic