History and Lies or What’s Wrong With New Beliefs

More misconceptions, but this time it’s based around an idea that I have mentioned on other peoples blogs a few times this year, and a wonderful commenter mentioned on my post the other day, and thus reminded me of the fact I have been meaning to write about this topic for a while now.

We will begin with the misconceptions themselves, or perhaps not just misconceptions, but these are things that began as lies, outright falsities, that have become misconceptions.  The misconception that everything we believe and practice is necessarily based on some ancient pre-existing belief and practice.  You will want examples of course, apparently I must provide examples.

This is truly the oddest of the bunch, in my opinion.  There are mass amounts of articles and books written that speak of the fact that Wicca is a modern religion, drummed up by Gardener – but possibly based on a mixture of other older traditions (including Christianity).  And yet, it seems like the large majority of Wiccanate Pagans (but not Wiccans, who know better) believe that Wicca is a very ancient religion that survived through all the Christian dominated centuries, including those Inquisition centuries.  But plenty of Wiccans were killed during those times too, that’s why we take the Burning Times so seriously.

Apparently originated in ancient Greek religion, or possibly Roman, or maybe it was Celtic… One would think the disparity over where it originated might clue people into the fact that it isn’t historical at all – but apparently not.  So it is that the MMC Triple Goddess existed in ancient times, I guess in multiple religions, and in Greece and Rome always had Hekate as the Crone.  Which She never was.

There are many three formed Goddesses, Hekate is one, but She is Herself in this triple form, three maidens who are somehow one being.  The Morrigan is a triple Goddess, made up of three separate Goddesses – but whether She is a singular being of three merged deities, or simply it is the name for the group of three, like murder is a grouping of crows, is unknown to me.  The Moirai, or Fates, are another form of triple Goddesses, but They are separate beings.

Anyway, there are plenty of triple Goddesses, of different types of triplicity – but the truth is, we haven’t really found any historical precedence for the whole Maiden-Mother-Crone thing.  It seems to have originated with Graves and some other people.

Paganism was of course a large worldwide religion before Christianity came along and destroyed everything.  Everyone everywhere was Pagan.  One religion for all peoples.

Yeh, it’s hard just to type that.  I don’t know how anyone makes this mistake, but I see it quite a lot.  How there was one worldwide religion followed by all peoples, everywhere, when there was also a multitude of different religions practiced by people of various nations – well I just don’t know.  Sometimes I think they are referring to Hellenism, or perhaps Religio Romano – problem Roman, because they did spend a lot of time conquering other places and that was the first religion that Christianity destroyed I suppose.

There was never a religion called Paganism, there was never a people named Pagans.  Pagan was, at first, a word meaning “country dweller”, which likely turned derogatory before Christianity came along – to describe country yokels probably.  Then Christianity used it to refer to anyone who wasn’t Christian, so it was used to describe people of many different religions.  But it was not a religion and no one claimed the title for themselves like we modern Pagans have.  And to that, it’s still not actually a religion, just a category of religions and spiritualties.  Some people call their personal religion “Paganism” because they don’t have a better name for their religion, but it is not, by itself, an actual religion.

All The Holiday and Festivals

Every holiday that Christianity has claimed in some way, even those they would prefer to distance themselves from now – such as Christmas, Easter and Halloween – were all stolen from ancient Pagan festivals.  Easter was stolen from the Heathen religion, the festival of Ostara for the Goddess Eostre – and also ties into Ishtar a Mesopotamian Goddess.  Christmas is some ancient winter solstice festival, or it was stolen from Saturnalia, or, something.  Halloween was of course Samhain, the Celtic festival.

Halloween was indeed Samhain, this much is true. Christmas seems to be a conglomerate of multiple ancient festivals and traditions that ancient pagans took with them when they converted to Christianity – as well as some modern things,  like Santa.  But a lot of what we say about certain ancient festivals hasn’t got much history actually backing it up.

It would take more than this little post to go into it all, but I have written about Easter-Eostre-Ishtar before if you want to check that out.  Suffice to say, Easter is most likely a modern festival and other than one writer named Bede, who is not entirely worthy of trust, there is no evidence of Eostre the Goddess or Her supposed festival.  It indeed seems just as likely that we stole Ostara from the Christian Easter.

So, some ancient festivals were stolen, or more likely moved with the converted – who had every right to continue their traditions after they converted – and some are more modern, or a mix of the two.  But none of it is so bad as we like to make it out to be.

Why The Need For The Lies?

I am sure I could list more misconceptions of this nature, they are abundant indeed, and I could list things that aren’t misconceptions but still show our need to justify our present by the beliefs and practices of the past.  Like, why do we need to find evidence of past cultures beliefs in transgenderism? If it didn’t exist, would it make trans people now not so legitimate?

But let’s move on before I write a novel.  I really want to know why everything needs to have a basis in history.  Why does Wicca need to be ancient to be legitimate?  Why do our festivals need to be ancient (and stolen by Christians) to be legitimate?  Why does the MMC Triple Goddess need to have historical precedence? Why does Hekate not have the right to show Herself as a crone in UPG without history falsely backing Her up?  Why does Paganism have to be an ancient religion followed by everyone?

Are we not legitimate now? Do we not matter now?  Do we really need to pretend like a group of people just like us existed in ancient times and was destroyed by the evil of monotheism, to be worthy of existing now?

What is so wrong with being new and shiny?

In my opinion, there is nothing wrong with it.  There is nothing wrong with the fact that Wicca is a modern religion, and Wiccans should be (and I think they are, it’s Wiccanates who are defensive about it) proud of their new religion and just how much it has grown! I mean, it’s pretty damn amazing when you think about it.  Wicca is about a century old and look at it now – in the western world, you say Wicca, and you have a pretty good chance of the average non-Pagan knowing what you’re talking about.  Albeit they may have some misconceptions about it, not know much about it – but they recognise the name!

The festivals are the same sort of thing.  Who cares if Ostara is ancient or modern, stolen from Pagans or stolen by Pagans – it is here now and thousands of people celebrate this festival every year.  That is pretty wonderful.  And Eostre the Goddess, did She used to exist, was She worshipped, did She have a different name or what? We don’t know, maybe we will never know – but She is here now and She has worshippers.  I repeat, it’s amazing.

The MMC Triple Goddess is just like Eostre in that regard, She/They have a massive following in the Pagan, Wiccan and Witch communities.  She, whether She has always existed or not, whether She is ancient or modern, is here now and She is very popular, famous even.  And while some of us don’t like the whole Hekate Crone thing, that’s our own problem, not anyone elses.  Take away the false history and admit it is UPG, or SPG now, and we haven’t a leg to stand on in our complaints.  And in some modern beliefs She IS the Triple Goddess, Maiden, Mother and Crone, all by Herself, fulfilling all roles.  And, that’s pretty cool really.

Seriously.  Be amazed.  Be happy.  Be proud.  Be awed.  You are part of something grand. 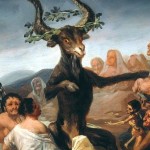 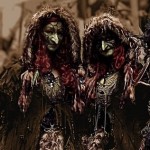 September 16, 2016 Embracing the Evil Witch
Browse Our Archives
get the latest from
Pagan
Sign up for our newsletter
POPULAR AT PATHEOS Pagan
1

Why Do So Many of Us...
John Beckett
Related posts from Hearth Witch Down Under