The last day of the lunar month falls on the dark moon, or astronomical new moon and is when the moon is not visible to us on earth.  It is Hene Kai Nea and is the night of the Deipnon, or Hekates Supper and is of course sacred to Hekate.  This one is part of the traditional Men Kata Theion.  This lunar month the Deipnon falls on the evening of the 18th of December and continues through the day of the 19th.

Hekates Deipnon is the night when Hekate wanders the land leading the host of the restless dead.  This is a ritual in honour of Chthonic Hekate, though also in part it can honour Hekate as a lunar Goddess.  Offerings were made to Hekate and the dead at threeway crossroads, and outside peoples doors in Athens (where a dedicated shrine was placed).  In modern times neither of these things is always possible, so indoor rituals and offerings placed upon the usual altar are fine.

Like the Noumenia, the Deipnon is somewhat more involved than the other sacred days.  While most of the sacred month includes simple rituals, the Deipnon also has some other activities that can be done throughout the day and night.

Similar to general Pagan activities for the dark moon, Hekates Deipnon is a time for endings and finishings.  It’s a day for finishing up your to do lists, finishing off any projects you still have sitting undone.  It’s also a time for cleaning and cleansing the house, the shrines and altars and where possible your own self.  This day can be used as a sort of monthly spring cleaning time.

Sweepings from home, as well any scraps from offerings from the month, incense ashes and other altar and shrine mess can actually be offered to Hekate during the main ritual itself – I keep a dedicated container for holding all of these things during the month.  But if you have no place to leave such offerings, then it is fine to skip this part of it.

Hekates Deipnon is also the day for emptying and cleaning out the kathsikos, if you have one, which is to be refilled on the Noumenia.

We begin with the usual Hellenic ritual forms, preparation, procession and cleansing with Khernips.  This is followed by the lighting of a ritual fire or candle/s, and the tossing of barley if you happen to do that.  Then we call on the Gods to attend the ritual.  Our first hymn and libation are to Hestia, then we do the hymns and offerings to  Hekate and end with a final libation to Hestia.

Offerings to Hekate for this night can include garlic, eggs, cookies/cakes/breads, apples, onion, leek, fish, and any poisonous plant.  Sweepings from the house and altar can also be offered.  For incense I almost always use dragons blood.  Libations can be milk especially mixed with honey or wine – personally though I like to offer a strawberry liqueur, mostly because of the smell and colour of it, not because strawberry is all that significant.

I call Hekate Chthonia, underworld Goddess of dread,
Torchbearing leader of the host of the restless dead,
Great huntress abroad, whose presence quiets all sounds,
Wandering the land all over, announced by baying hounds,
Mistress of threeways, where all roads cross and meet,
Lady of the night, softly stepping with mud stained feet,
Queen of witches, accept our offering and grant us one boon,

Protect us from death and madness, this night of darkest moon.

Pour libation.  Light incense.  Say any prayers you have, and give any offerings.  If you are indoors and plan to take your offerings outside, you should do that now.  After leaving the offerings, walk back inside without looking back at the place you left the offerings (to protect you from seeing the dead and going mad).  Once back inside return to the altar or ritual area and finish your ritual.

This is a chthonic ritual which means it should be holocaust and all food and drink should be for the Gods and not consumed by humans.  Spend some time in after ritual practice, anything to do with honouring the dead is a good idea this night.  But cleaning, cleansing, doing any of those finishing tasks are also great.  Divination is also recommended.

I love Hekates Deipnon, it’s my favourite time of the lunar month and if I am unable to do any rituals I at least try to do this one.  I almost always use the Orphic Hymn to Hekate, Thomas Taylor translation, for the Deipnon ritual so this particular night was a novelty for me, to use my own hymn. I feel like it went well, but I will probably use the Orphic Hymn more often than not in future. 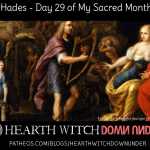 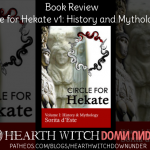 December 25, 2017 Book Review - Circle for Hekate: History and Mythology
Browse Our Archives
Related posts from Hearth Witch Down Under