The Hellenic month is a lunar month, it begins with the new moon, when the first sliver of light reflects from the moon to us here on Earth and it ends with the dark moon, when there is no light reflected from the moon at all.  A number of the days each lunar month are dedicated to specific deities or a number of deities in some cases, if they rule over similar things.  Most of these days require only basic rituals, offerings of incense and libations with a hymn and you’re done.  The Deipnon is a little more involved, but still fairly basic.

The last day of the month, the dark moon, is the Deipnon, dedicated to Hekate and the ritual of Hekates Supper.  The Deipnon is my favourite of the Hellenic month, not least because it is dedicated to Hekate – but also, it’s just a nice way to finish things up. The Deipnon holds multiple purposes: purification, expiation and the supper itself.

I have explained before that in Hellenismos, the day ends and begins with sundown.  The dark moon (astronomical new moon) was set to occur at exactly 12:59pm on Sunday, the 5th of June (Aus Eastern time).  So, for Hellenism, that means the dark moon day, and thus the Deipnon, began at sundown on Saturday the 4th of June – at around 5.30pm apparently, but I count sundown as 7pm lately because I am busy before then anyway.

We are used to things being done in a certain order – in a case like the Deipnon, we would expect to begin the day in the morning, doing the small stuff in preparation, and then end with the actual ritual part of it at night.  But because the new day begins with sundown, this means we should do the ritual first (as it is a night time ritual) and then do the small stuff the next day!  It can be a little odd to get used to at first, but you soon adapt to the idea.  I actually find it kind of relaxing to do it this way.

Oxuthumia is the ritual purification of the home before the ritual of Deipnon.  Basically you sweep and clean the home and smoke the house to cleanse it.  Many of us take this time to do a kind of spring clean.  Because what you gather during the cleaning is supposed to be offered alongside the Hekate Supper in the night, this means it has to be done before the ritual, which would mean doing it before the dark moon traditionally begins.  I don’t know how the ancient Greeks reconciled this, so I do my own thing.

I do some basic cleaning throughout the day – this month Saturday – but I do that every day anyway, so it’s nothing unusual.  I try to keep some sweepings, but honestly, most of the time I automatically throw them in the bin and then smack my head.  But it’s done and gone, I will not teach my kids by example to rummage through the kitchen bin!  Thankfully I have a back up.

In the evening when the dark moon officially begins, Saturday evening, I ritually clean my altar and shrine – and this is the backup, the sweepings and whatever else that comes off the altar and shrine, and from around them, go into a container I have for this specific purpose.  This container also holds all offerings I have made to Hekate throughout the month.  Then we move onto the Deipnon itself.

The main ritual of Hekates Supper is fairly simple, you make an offering to Hekate and leave it at a crossroads for Her and also for the dead.  It is truly up to the individual what they offer, but there are traditional ideas that you can take inspiration from.

On Saturday evening, after the cleaning of the altar and shrine, I gather the food offerings for the Deipnon and take them to my altar and shrine.  This month, well, life happens and I do the shopping on Mondays, so on this Saturday I had no eggs left, no fish, no leek, no onion and not even any apples – which I usually offer to Hekate.  My offering consisted of barley and olive oil (traditional Hellenic offerings not specific to Hekate), garlic, bread and chocolate.  Why chocolate? Because it’s yummy and the Gods should have some.

I take the offering out to the altar and begin the ritual.  First up, Khernips of course, I made the khernips and did the usual wash and sprinkle (I should point out too, that I showered before gathering the offering).  Next I offer a hymn to Hekate while lighting some incense, and then place the offering into my usual offering bowl.  I then gather up that bowl with the new offering, the container with all the sweepings and previous offerings and a shot glass with some wine in it and go outside.

I take it all to my “crossroads” which, as I may have mentioned before, is the end of my driveway – my driveway meeting the road creates a kind of three way crossroads.  I say another hymn to Hekate while pouring out the libation, then I place the new offering and container full of other stuff onto the grass. I turn around and walk away without looking back.  I go inside and potter around at the altar and shrine for a while, then go about my night.

So, two points here.  You are not meant to look back after leaving, to do so is to risk the dead driving you mad.  And, you are meant to leave the offerings on a plate and leave the plate there, never to retrieve it.  But, I don’t have excess plates to leave lying around outside, leaving paper plates would be littering and the alternative banana leaf that is often suggested is something I neither have nor know how to access.  I did however come across another idea, just after the Deipnon of course, of using a tortilla or some other flatbread – what a great idea, wish I had thought of it.

Sunday was the day of the Deipnon, when the dark moon (astronomical new moon) would actually occur.  This is the day many Hellenes will do things somewhat similar to general Pagans, things of an ending or finishing nature. Suggestions include

I don’t pay bills on the Deipnon, unless it coincides with my pay day – I pay everything as soon as I get the money, else I run the risk of spending it on frivolous things! This month I didn’t, or couldn’t think of, any debts that I needed to pay off in the reciprocal way.  I also didn’t need to write out any thank yous or offer any to any deities, having already done so at other times during the month.  As for unfinished projects, there were none that I could get finished within the day – not all projects are for finishing immediately, but are longer term than a lunar month.

As for cleaning, of course I did some more of that and I may have got around to finally folding some of that clean laundry that has maybe been sitting in baskets for weeks now.  Perhaps.  I made sure to actually empty the dishwasher after doing the dishes this day!  I emptied my Kathiskos on the bird-of-paradise plant in my front yard that really needs some love – I have heard that kathiskos offerings make for good plant food.  I also checked my calendar, homeschool planners and blog planners and checked off those things I had forgotten to check off (I am terrible for that) and note those things that I didn’t do and need to do in the next month.

The ancient Hellenes would, when necessary, carry out an act of expiation – that is, they would do something to get rid of guilt and atone for any wrongdoing.  The common way of doing this was to bring a dog into the home, have every member of the family pat it and then kill it in sacrifice to Hekate.  The act of touching was to move ones wrong doing and guilt onto the dog and then, by sacrificing it, you are basically killing the wrongdoer.  It was an act of scapegoating.

I don’t think this would have been done every month.  Could you imagine that?  One for every household.  How many people were in, even just Athens, in that time?  My town is relatively small, maybe 4000 houses, give or take a few hundred.  I can’t even imagine that many homes killing that many dogs in even an entire year, let alone every single month!  4000 dogs per month, just for my little town.  Imagine how it would be in a place the size of ancient Athens.  No, I cannot believe that this would have been a regular practice in Hellas – just for practical reasons.

Obviously people today don’t do this sacrifice – or most don’t, it’s possible some have done it.  But, some modern Hellenes will recreate this sacrifice with artificial dogs, usually ceramic ones.  They will smash the dog figurine in mimicry of a sacrifice.

This is something I don’t do and I believe I probably won’t ever.  I am not against the idea itself for others, but for me, I prefer to own my actions and not let someone or something else take the blame for whatever I have done.  If I must suffer for it, so be it. If I must atone, then I will atone.  And, I understand many of those acting out this ritual probably do so for the tradition side of it, rather than scapegoat side of it – but I don’t know, it’s not for me I guess.  I prefer my rituals to have more depth than just re-creation, it would be too much going through the motions for me.

If a ritual doesn’t hold depth and meaning to me, if it doesn’t provide something for me, then I won’t do it.  To hell with reconstruction if it is nothing more than empty motions.

So, that was my Deipnon for June, and a mini-rant included as a bonus.  I am sure this was no more helpful than any other post about the deipnon, probably even less helpful than many – but what can I say?  I like to share.

Baring the Aegis
Temenos
A Forest Door
Snow Calla – an old Livejournal, but has some great info!

June 9, 2016
Who Do You Really Want In Your Bathroom
Next Post 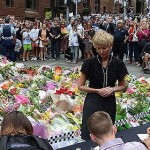 June 14, 2016 We Don't Have Mass Shootings
Browse Our Archives
Related posts from Hearth Witch Down Under

Hekate: Goddess of Witches
When discussing the Greek gods in the modern era, it’s hard to...
view all Pagan blogs