Noumenia – Day 1 of My Sacred Month

The first day of the lunar month is the new waxing moon, when the moon is a tiny sliver of a waxing crescent in the sky.  Barely visible to the eye, not only because it is so small but because it sets just after the sun sets, meaning there is very little time after dark to see it.

The new moon is named Noumenia in the traditional Men Kata Theion and is for gaining blessings on the home, for the coming month.  This day is generally sacred to Apollon Neomenios, Zeus as Ktesios and Epikarpos, Hestia, Agathos Daimon, Hekate, Hermes and Selene – all of Them are domestic deities and/or lunar deities. It is also often used as a day to honour any and all of the deities that are regular guests in the home.

Because so many deities are honoured during the Noumenia, it is typically the most involved, thus the longest, of the monthly rituals.  I have tried to keep the individual hymns as short as possible so that the ritual isn’t too long – especially necessary if you’re going to add in more deities from your personal practice.

Noumenia isn’t just one ritual to the household Gods though, it also has other aspects to it.  It is common to begin new things in this day, decorate the home in fresh flowers or in other ways, update your calendar and refill the Kathiskos (a jar of olive oil, water and food dedicated to Zeus Ktesios).

Being a new moon ritual this is best performed at night.

We begin with the usual Hellenic ritual forms, preparation, procession and cleansing with Khernips.  This is followed by the lighting of a ritual fire or candle/s, and the tossing of barley if you happen to do that.  Then we call on the Gods to attend the ritual.  Our first and last hymn is to Hestia, as well as the first and last libation.  In between are the hymns to the various Gods of the day, and individual libations to them.

For this ritual I used eucalyptus incense, because eucalypt is a lunar plant, and it grows in my backyard as well as being an Aussie plant – so it is kind of homely too.  I find it refreshing, so I think it’s a good one for the beginning of the month.  For the libations I wanted to use milk but it has been a scorching hot November, and milk spoils.  Instead I mixed vodka with grape juice, a sort of pretend wine and used that for the libations.  I made no food offerings this time, but generally I would make small cakes/breads or cookies for the ritual.  Fresh fruits would also be good for this one.

“I call on the Gods of the Hellenes,
Deathless Ones, most glorious,
Chthonic, Oceanic, Ouranic,
Protogenoi, Titanic and Olympian.
Attend this rite and bear witness.”

“Hail to Hestia, First and Last
Hearth Keeper, Guardian of the Home,
Accept this our first libation.”  Pour libation.

“For the Agathos Daimon,
Good serpentine spirit,
Guardian of the abode, fortunate one.”  Pour libation.

“Great Zeus,
Ktesios, of the home, Epikarpos, bearer of fruits,
God of the pantry, preserver of foods.”  Pour libation.

“Glory to the Theoi,
I offer my thanks to you.”  Pour libation.

“And to Hestia, first and last.”  Pour libation.

Drink whatever remains of the libation offering (if it is potable) and eat what is left of the offerings.  This is a Ouranic ritual, so it is good to partake and share a meal with the Gods.  Spend some time in after ritual practice, since it is the start of the lunar month divination is a good thing to do now.

I begin my religious days at dusk, like the ancient Greeks did.  So for me the Noumenia began on Sunday the 19th, after sunset and continued on through Monday.  I did the Noumenia ritual on the Sunday evening, fairly early as I don’t think it is quite suitable for late night but instead closer to the setting of the moon.  Then on the Monday I did the other parts of Noumenia, refilling of my kathiskos, filling in my calendar, recreating my numerous to do lists and the like.  I also did a little bit of home decorating, and fortuitously it was a Monday which happens to be my grocery shopping day, so I also did that.

All in all, it was good beginning to this new month and this finally formed monthly practice of mine. 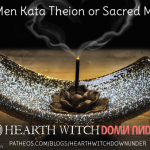 November 20, 2017
My Men Kata Theion or Sacred Month
Next Post 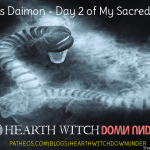 November 22, 2017 Agathos Daimon - Day 2 of My Sacred Month
Browse Our Archives
get the latest from
Pagan
Sign up for our newsletter
POPULAR AT PATHEOS Pagan
1

Rise In Power Mambo Bonnie Devlin: A Lesson...
This week I learned of the death of someone who was a...
view all Pagan blogs
Copyright 2008-2020, Patheos. All rights reserved.