In Hellenism there are many annual festivals, as well as some that are observed every few years (such as the Olympics).  But there is also the Men Kata Theoin, or Sacred Month.  This is where certain days of the lunar month are dedicated to certain specific deities.  Some modern traditions also include the advice from Works and Days to decide what each day of the lunar month means outside of the Gods.

My personal Hellenism, however, is all about adaptation – to Australia, to myself, to Hekatean needs, to my family, my region and my home.  The usual Men Kata Theion is not really right for me, mostly because it honours many deities that just aren’t a big part of my practice but ignores the deities who are part of my life.

Because of this I decided to forgo trying to observe the normal Men Kata Theion and have spent the past year and more trying to come up with my own personalised sacred month.  Not every day has a specific ritual need to any specific deities – though these empty days may still include simple rituals to all of my Gods in general, and to Hekate specifically.

Over a year it has taken to finally get this list together.  The reason it took so long is both mundane and not so mundane.  My year has been pretty busy, as evidenced by the several long periods where I haven’t even done any blogging at all.  I have gone through political wrangling regarding home education in my state, I have dealt with impending homelessness and then almost actual homelessness (thank the Gods for my mother, and thank my mother for giving me and the kids a place to stay) and obviously I have moved house twice.  So I have gone through periods of little no energy or motivation to research and divine for my sacred month, as well as periods where I just couldn’t do anything because of lack of internet, lack of laptop and lack of time.

The not so mundane is things like the appearance of deities in my life I wasn’t expecting – Prometheus being the loudest one to have taken not just a place in my religious life, but a massive place.  From being barely a blip on my religious radar to becoming one of the three most important deities to me.

Some of the deities I feel close to, or am most attracted to religiously speaking, also happen to be those who don’t have a massive example of how to honour Them.  Prometheus is one of those, Asteria is another. This increases the difficulty of adding Them to my monthly practices – not only do I need to figure out what days to honour Them, but how to honour Them as well.  When you have little in the way of good, practical and fitting hymns to use and little in the way of symbolism and sacred items to use during ritual – well it definitely consumes a lot of time trying to figure it all out.

I am certainly not done, there is more to go, more to figure out.  But I now have a good enough starting point.  I have used research of what resources I had available (ancient and modern), I have used intuition and feeling, logic and of course divination.  I also kept some of the original Men Kata Theion days, such as the Deipnon, Noumenia, Agathos and Oceanic days – because why reinvent the entire wheel when some of the parts function perfectly well?

The traditional sacred month is split into three parts, or decads (ie. 10ish days per part). For my own month I have gone with a simple (though tedious) count from the new moon on.  As well as key points, such the full moon and dark moon being on their rightful days, and some days work specifically around them.  Day 1 is the new waxing moon, day 15 is the full moon, and the last day is dark moon of course.

10 – Promethean.  Prometheus, Hekate and Medea.  On the 10th shining of the moon, Medea collected the herb that grew from the blood of Prometheus (from Valerius Flaccus, Argonautica book 7).

12 – Hephaistos.  To honour Hephaistos.  Works and Days notes the 12th day as being a good day for hard work.

15 – Full Moon.  Selene, Hekate and Artemis.  Traditional and obvious, these are the three main lunar Goddesses.

21 – Artemis. The 6th day is sacred to Artemis, this is the 6th day after the Full Moon.

19 – Night. Nyx and Asteria.  Works and Days marks this as a day that improves as it gets closer to evening.

24 – Melinoe.  Works and Days marks this as a day that gets worse as it gets closer to evening, so Melinoe it is (She who brings nightmares).

29/30 – Pre-Deipnon.  Hades, the day before the Dark Moon.  Because, it’s almost dark moon, also the Works and Days marks it as an impure day – anything to do with the underworld is “impure” as regards miasma, so it is fitting.

I have not actually done the full month yet, since I have only just finished working out how I want it to be.  So this, from November 19/20, is the first month that I will try to do every single one of these days (not that it is really all that many) as well as doing my normal daily libations, hymns and prayers.

I will also try to do a blog post for each of them!  These posts won’t be too personal, instead just my basic ritual outline, the rituals meaning/reason for being, what I offer in terms of food/libation/incense/candle colour and any hymns that I recite.  Hopefully this will get me off my butt, back to doing regular rituals (I have had a little trouble getting into the swing of things since moving) and back to regular writing again.

Wish me luck and pray for the diminishing of my laziness. 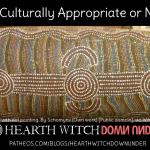 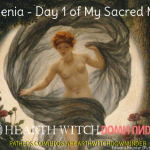 November 21, 2017 Noumenia - Day 1 of My Sacred Month
Browse Our Archives
get the latest from
Pagan
Sign up for our newsletter
POPULAR AT PATHEOS Pagan
1

Imbolc: A Time For Cleansing
Imbolc is good time for cleansing. And this year, it’s both especially...
view all Pagan blogs
Copyright 2008-2020, Patheos. All rights reserved.