Prometheus the Titan was born of Iapetus and, either, Gaia, Themis, Asia or Klymene – depending on what you’re reading.  His wife is said to be either Pronoea, Hesione or even Themis or Asia (when They are not said to be His mother).  He has one son, Deucalion, who, with his wife, was one of the only survivors of the great flood set upon us by Zeus.

In the war of the Titans against the younger Gods, Prometheus at first sided with His brethren.  He attempted to counsel the other Titans on how to win the war with guile and trickery but They were unwilling to listen to Him.  Thus, He turned His back on Them and gave His counsel to Zeus and the other younger Gods, making Him partially responsible for Their victory over the Titans.  So of course Prometheus was not among those Titans who were punished or locked away and was welcomed (perhaps grudgingly) in Olympus.

Prometheus is generally seen as the creator of humanity.  Depending on which lore you look at, He either fashioned us from the start, using clay of some form or He did so after the previous form of humanity was destroyed in a flood.  Either way, He is our creator in myth and lore and is seen as our greatest patron and benefactor.

But this is not the only reason He is seen as such, for many times has He been on our side and worked in our favour – even to His own detriment.

In all cases Prometheus is the one who gifted us with fire.  There are multiple versions of this story.  In the one when humanity is first created, along with all of creation, the Gods gave all things gifts – such as wings for the birds.  But when it came humanitys turn to receive a gift there was nothing left to give, or perhaps They simply didn’t want to give us anything.

Prometheus, feeling sorry for us stole fire from Hephaestus and/or Athena, hid it in a reed so the other Gods couldn’t see and taught us how to make fire, how to keep it flaming and not go out and even how to use it for various things including metal work.  This is how Prometheus is honoured as not only a fire God but also a God of smiths and of science. He is also said to be the one to teach us other things such as writing.

The other story about His gift of fire to us begins in a much different way and includes another example of how Prometheus works in our favour.  Zeus demanded that humans offer only the very best portion of our sacrifices and offerings to the Gods.  Prometheus asked Zeus how we were to know which is best, unless He decides.  Thus it was that Prometheus brought out an ox, killed it and divided it into two piles, asking Zeus to choose the best.  Whichever Zeus chose is what we must give in our offerings and sacrifices.

Zeus knew Prometheus well enough to know that He was being tricky and guileful, but He thought the trick would be played on us and go in Zeus’ favour.  Little did He know that Prometheus was plotting the other way.  So Zeus chose the best looking pile of the ox, the one glistening with palatable looking clean white fat.  Leaving the ugly looking pile covered with skin and paunch for us humans to consume.

Zeus soon discovered the trick however, under the glistening fat He had chosen for the Gods was bones and other useless things.  But under the skin and paunch chosen for humans was all the most edible meat.  But the trick was done, the choice was made and Prometheus won this deal for us – that we need only offer a portion of our foods to the Gods, and that we get to keep and eat that which is most palatable to us.

As we might imagine Zeus was enraged by this trickery and He sought to punish us for it.  He took fire from us, so that we must eat our new won meat raw and shiver in the cold.  But, and here the story goes the same – Prometheus felt sorry for us and did His best to steal fire back from the Gods and gift it to us again.

But of course, Zeus was even more enraged and there was no coming back from this one.  For us, we were punished with Pandora, a story for another time.  But Prometheus suffered perhaps more terribly than did we.  Zeus had Prometheus bound and chained with the strong chains of Hephaestus, to a rock or pillar at the peak of a mountain in the Caucasus mountains.  Here every day an eagle, said to be the offspring of Echidna and Typhous, would tear open Prometheus and devour His liver.

But every night His liver would regrow and regenerate, becoming whole again, so that in the new day the eagle could again tear Him open and devour the liver once more.  And on and on over the centuries and perhaps even the millennia – some say 30 thousand years! – did Prometheus suffer this torment in our name.

Prometheus could still see far and hear much that happened in the world and in Olympus.  So it was that He learned a secret that would one day come to be of great import to Zeus – the Goddess Thetis would one day bear a child who would supplant their father.  Why should this matter? Because Zeus was soon planning to wed that very same Goddess, He would then become that father to be dethroned!

He spoke lightly of the matter once with Io, the woman who was once turned into a snowy white cow and who stumbled upon Prometheus on His mountain.  There they spoke with each other at some length about various things, but most telling for Io was that Prometheus, who has the gift of foresight, was able to see into her future and her torment.  He also, it is said, spoke to her of the one who would one day free Him, the one who would be a descendent of hers.

There are many stories on what happened next.  In some tales Prometheus was entirely unwilling to share the knowledge He had about Thetis, wishing suffering upon Zeus.  Hermes Himself tried to get the information from the Titan, but even His wily tongue could not bring it out of Prometheus.  But some say that Prometheus gave up the information willingly, and in return He was freed from His torment.

Whatever the reason though, Prometheus was indeed freed.  Most accounts agree that the one most responsible for His release was the son of Zeus, who was also a descendent of Io.  Herakles, on His task to find the apples of Hesperides, came upon Prometheus.  The Titan, being who He is, offered advice to the demi-God about the apples and thus helped Herakles in his quest.  Herakles then returned the way he had come and shot dead the eagle which had so long devoured the liver of Prometheus.

Prometheus is credited with wearing the first ever ring.  It is said that Zeus was proud of what Herakles for freeing Prometheus, but because He had once vowed to never let Prometheus go free He had to do something about what happened.  Tricky as He can be, He devised the idea of Prometheus forever wearing a ring made from the chains and rock on which He had been chained – thus, technically, Prometheus is still bound. 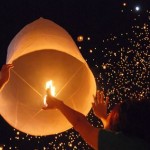 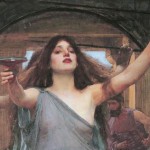 November 4, 2016 That Priestly Title
Browse Our Archives
get the latest from
Pagan
Sign up for our newsletter
POPULAR AT PATHEOS Pagan
1

Salt City Pagan: Facing the Full Truth
My expectations were very unrealistic as I approached Druidism. How to deal...
view all Pagan blogs
Copyright 2008-2021, Patheos. All rights reserved.