Samhain isn’t, of course, the only festival that exists to honour the dead.  I can’t be entirely sure, by I think that nearly every religion out there has some kind of festival or day for celebrating and honouring those who are gone – and sometimes also the Gods who rule over death and the afterlife.

During the end of last and into the beginning of this year I spent several weeks researching and learning about the various beliefs and practices of many religions, ancient and new, regarding death and the afterlife. This of course included having a look at any festivals, days or rituals that were about honouring, celebrating or appeasing the dead.  I noticed that many of the festivals regarding the dead have a lot in common with each other.

The Veil and The Gates

Samhain is well known to be a day in which the veil or mists that separate the worlds of the living and the dead become thin – meaning that the spirits of the dead, as well as other Otherly beings, are more likely to walk our land of the living than they are usually are.

In Buddhism and Taoism in China and perhaps other areas, the 7th lunar month – approximately our August, though the dates change – is called the Ghost Month.  During this month the gates to hell (different to the Christian Hell) slowly begin to open and the dead begin to roam the earth.  This activity peaks on the 15th of the month and people observe the Hungry Ghost Festival, doing what can be done to honour the dead, remember them and appease them.  Afterwards the gates to hell slowly swing shut again until they are fully closed as normal when the month ends.

A similar happens at around the same time of the year in Japan, leading to the Buddhist festival of Obon which bears, of course, some resemblance to the Hungry Ghost Festival – but it also has its own unique practices and variations to make it noteworthy.

Most interesting, to me anyway, is how similar the Chinese Ghost Month is to the Month of Ghosts, or Ne Izi Gar, of some parts of ancient Mesopotamia.  The month begins on the new moon after the summer solstice (so about July or August) and the gates to the Netherworld slowly begin to open – again, the dead begin to roam the world.  It was on the full moon (so, like the Chinese beliefs, about the 15th of the lunar month) the gates would be fully open and people would do what they could to make this time easier.

In Hellenism there is the festival of Anthesteria – though it doesn’t focus entirely on the dead (it is actually a festival in honour of Dionysus) it too involves a similar thing.  Over the three days of the festival the dead walk amongst the living and certain aspects of the festival are used to appease, honour and then send the dead on their way back to the Underworld – or wherever they may have been before.  Anthesteria, unlike many other death-related festivals, happens to occur in the early months of our modern year – January or February, depending on the year.

Offerings for the Dead

The offering of food and goods to the dead is apparent in almost all of the festivals I looked at, indeed all of them except the Abrahamic ones, and is done for any of three reasons.

Appeasement – Food and goods are offered to the dead to convince them to not harm you.

Gifting – Food and goods are offered to make their afterlife better.

Reward – Food and goods are offered to make your life and afterlife better – whether for the Gods or ghosts to bless you, or simply to build up good karma or the equivalent for your next life or afterlife.

Having a meal at the gravesite of the deceased and/or leaving food on the persons grave, leaving food on an altar or shrine, or in a place in a temple and making a place at the dinner table for the departed to share your meal with you and your living family are just some of the ways the offering of food is given.  Some festivals, such as the monthly Deipnon, may have the offering of food left (for both the dead and the Goddess Hekate) somewhere more specific, in this case a crossroads or other suitable liminal place.

Offering of goods is much the same as the offering of food.  Commonly things the person enjoyed most in life are what is offered, from cigarettes for the adults, to toys for the kids.  It’s not always the literal goods that are offered however, in some traditions, or during some festivals such as the Hungry Ghosts Festival, people will make tokens to represent the deceased’s favourite goods.  This includes fake or real money, and even paper TVs and houses – I would assume the possibilities of what can be offered are endless in this practice.

Offerings to the Living

Much as people will offer food and goods to the spirits of the dead, so do certain religions and cultures require people to make such offerings and donations to the living.

The Hindu festival of Pitru Paksha, which occurs in or around August, observes the practice of offerings to the dead but also requires one to give to the living as well.  This is in part to create kind of good karma, the more you give to your beloved dead and to the living, the more you are likely to have in your afterlife.

Fire is a common element in most death festivals and observances.  Candles are lit for the dead in pretty much every religion and culture, for many different reasons – for remembrance, to fill the darkness left behind when someone dies, to guide the beloved dead to their home and even to protect one from the dead that would harm them.  The Mesopotamian people would use torches rather than candles.

Fire plays another part in many death festivals of course, in the role of offerings.  It is used to burn physical offerings, such as the paper ones made for Hungry Ghost festival or in Hellenism where we might burn our food offerings if we don’t bury them.  But it is also used to light incense which is another very common thing to do in many death festivals.  Incense is used as an offerings itself in many religions and it is also used a method of communication in some, the smoke of it taking our prayers to the Gods and to the dead.

An unsurprising one is the practice of avoiding certain things during the period of a death festival.  Most common seems to be the avoidance of beginning new things, new projects and the like.  But interestingly one of the things I noticed was in common between Judaism and Hinduism.  During certain of the Jewish holy days that pertain to death (there are sadly many) and during the Hindu festival of Pitru Paksha, it is common practice for people, especially men, to avoid cutting their hair.  Unfortunately I haven’t actually looked into the why, but I do find it interesting nonetheless.

Most commonly done in the Abrahamic traditions is the tradition of fasting for at least of the festival period, that is refraining from eating food.  In Judaism this is usually in remembrance of those who couldn’t eat during the holocaust or the fall of Jerusalem and other such times.  But for some religions (and it’s not just the Abrahamic ones) fasting is done simply to honour the dead, to show respect and love for them via a personal sacrifice.

Though it seems odd at first, music and dancing really are more common in honouring the dead than it first seems.  Just think about it for a moment and you might even see it yourself.  In the modern western world we hold funerals that are followed by (or sometimes preceded by) wakes, where people will often drink, talk, listen to or make music and indeed dance.  A good way to release the pent up emotions I think.

In the Japanese festival of Obon, the people dance a specific dance called the Bon Odori.  I don’t know what it is exactly, except it comes from the story of Maudgalyāyana and his quest to alleviate his late mothers suffering in the afterlife.  When he succeeds he dances for joy and it is not custom for others to do the same on this day.

Dancing can also be seen in Samhain itself, when groups gather to observe Samhain and light the bonfires – dancing is sure to happen.  And of course, Dia de Muertos is one that certainly must come to mind for many people when we speak of dancing and music for the dead.  Beyond the revelry, there is of course the custom of playing music that the dead used to enjoy, as a way to remember them, especially in a happy way.

Our first thoughts of death festivals will often tend towards solemnity and seriousness, but when we think a little deeper about it, we begin to see something else that is common in many religions and cultures – that of revelry.  As mentioned above, in modern western culture we tend have a wake which for many of us involves, well, drinking until we drop.  I don’t know how it is in all places, but with my family here in Aus wakes are full of stories, jokes and fun. This in itself is a festival for the dead, even if it isn’t an annual one.

But it is also seen in the annual festivals.  Dia de Muertos is perhaps the best example of revelry and death – dancing, singing, feasting and partying to the extreme.  Of course there is the more solemn and serious side, don’t think otherwise.  But the Mexican people are obviously one group who recognise the need for letting go of your pain through joy – at least that is one way to interpret revelry in death. 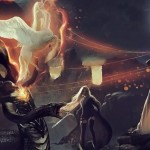 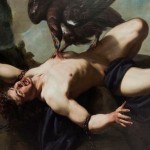 November 2, 2016 Prometheus in Mythology
Browse Our Archives
get the latest from
Pagan
Sign up for our newsletter
POPULAR AT PATHEOS Pagan
1

Why No One Loves Lammas (&...
Raise the Horns
Related posts from Hearth Witch Down Under

Getting to Know You: Developing Relationships with Deity
Don't stress yourself out: the gods are more interested in the energy...
view all Pagan blogs
Copyright 2008-2020, Patheos. All rights reserved.