The Thrifty Heathen’s Guide to Altars

Continuing my Thrifty Heathen’s Guide series, today I’d like to talk about altars and how easy it can be to do them on a budget.  Heathenry is not as guilty of the emphasis on elaborate, expensive altars as much of the rest of Paganism, but it can still be an issue for those living in poverty who would like to set up a pleasing altar to the Gods, ancestors, or land wights.  Here’s a few ways to make your altar shine without spending much money.

1) Gather some found objects. I feel like I say this a lot, but it can’t be over-emphasized.  Most of the Heathen Gods are associated with some sort of natural thing or phenomenon which can often be found outdoors for no cost.  For example, quartz is often associated with the God Thor, and can be found just lying around outdoors in many states in the US.  Oak is also associated with Thor, and finding a small fallen branch to perhaps carve with a few runes and lay on your altar shouldn’t be too difficult.  For Njord, anything found at ocean, river, or lake shores can represent Him and be pleasing to Him on an altar.

2) Visit a thrift store. This isn’t exactly free, but it can be pretty low-cost depending on how many items you’re looking to get.  Thrift stores can have some interesting and amazing items that probably won’t be overtly Heathen, but will have associations if you look below the surface.  For instance, my winter altar to Thorri features a small Santa figurine sans his usual red hat and coat – it looks just as I would imagine Old Man Winter.  Most thrift stores will have a decent figurine selection, and especially if you have time and a few paints, you can make some amazing deity representations.  Candle holders, pretty old bowls or cups, and little knick-knacks that could be pleasing to deities or spirits are also pretty easy to find in my experience.

3) Craft, craft, craft! This can be intimidating for those who have never attempted a crafting project, but a few youtube videos later, a lot of it is simpler than you’d think.  I can’t draw much besides stick figures, but I’ve made some things which I’ve been relatively impressed with.  Salt dough is a great place to start, and can be used to craft deity figures, sacred symbols, or other things that can help make an altar look stunning.  Going further, wood burners for carving symbols on branches or slabs of wood can be found relatively cheaply compared to the amount of use you’ll get out of them.  My current altar table was a pine round found at a hardware store for $6, which I burned symbols into, stained, and added a bit of paint, all for about a week of my free time and less than $20.  I think it’s pretty gorgeous.

4) Go simple.  You don’t always need to have an altar at all.  The spot in my home I pray at the most is my stove, which I light a candle on each morning.  It is the hearth, the center of my home, and is sacred to my ancestors, my house wights, and deities of the hearth fire.  I do have altars to these spirits and deities, but I find myself praying much more often at the stove, which is more accessible and easier to see and notice.  Each morning, I pray looking out of my eastern window, seeing the sun shine through the trees.  Even for a formal ritual, all you really need is a bowl or plate for offerings and a clear space to set them on; this can be found almost anywhere.  Altars are not essential to Heathen practice, and sometimes they can distract from it. 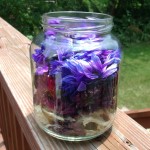 July 1, 2015
The Thrifty Heathen's Guide to Offerings
Next Post 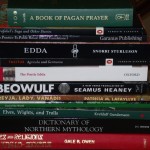 July 6, 2015 The Thrifty Heathen's Guide to Resources
Browse Our Archives
get the latest from
Pagan
Sign up for our newsletter
POPULAR AT PATHEOS Pagan
1

Moon Magick: What to do, When...
The Fairy Tale Witch
Related posts from Heathen at Heart

Punk Magick
Magick is about change. But change is always happening. What sets magick...
view all Pagan blogs
Copyright 2008-2020, Patheos. All rights reserved.