The Flame that Burns in the Sun

The Flame that Burns in the Sun September 14, 2015 Molly Khan

This past weekend, I hauled myself out of bed at 3 in the morning and made the long drive north with a couple of my friends and Grovemates. In what has become something of an annual tradition, we made the 13 hour trek to attend Midnight Flame, the closest ADF festival to our Grove.

In the past, I have found community, inspiration, and beautiful ritual at Midnight Flame; and I am so thankful to have experienced all those things again this year. But this year, I was able to feel the blessings of the Kindred and the inspiration of the flame more strongly than ever before.

Saturday afternoon, I went into trance and had one of the most vivid experiences I have yet encountered. Where often sight and hearing are the senses I am best at engaging in a trance state, this time I felt and smelled and tasted the things all around me.

I was getting a tattoo, a sunwheel to mark my thankfulness to Sunna for all Her gifts. The tattoo needle feels akin to a burn for me, and as I closed my eyes and rested my head on the table, I began to feel as if there were tongues of fire licking at the lines on my skin. Soon the entire design was burning, like the red-hot coals at the center of the fire.

I opened my eyes and looked up, only to be blinded. I knew instantly that I had not opened my physical eyes, but was instead standing in a sacred space very different from the mundane world. I knew the answer, but I called into the light: “who are you that burns so brightly?”

The intensity dimmed, and I was able to open my eyes again. Before me shone the sun, taking up almost my entire field of vision, so brilliant I couldn’t have seen anything else if I had wanted to. Her voice spoke to me.

“I am the fire that rises in the East. I drive the horses that burn the sky. I hold the shield that the earth does not scorch. I have given you life with my light, and I have placed the fire in your heart before you spoke a word. Now heed mine: feel my warmth that gives and burns. I am generous, and I am mighty, and the flame I grant you is not to be snuffed out.”

From the blinding circle of light, a woman stepped out. Her dress was flame, Her skin was fire barely contained beneath the surface of Her body. In the palm of Her hand a light danced. She drove Her hand into my chest, and the fire burned through me. Unbearably hot and somehow icy cold, it ran red through my veins until I was full of flame my skin could hardly hold inside.

She took Her hand from my chest and placed it on the back of my neck, covering Her mark that burned ever more brightly. She whispered in my ear. “Your fire must be tended. Let it die, and my gift will not be given again.”

The flame burst out from my eyes, and the brightness of the sun shone fully, and all I knew was light. I don’t know how long I stayed like that, blind with brilliance instead of darkness. Gradually, sensory input seemed to lose all meaning, and I was aware of nothing.

I began to feel a cool wetness on the back of my neck as the artist cleaned his work, and slowly I became aware of the sounds and smells around me. I opened my eyes and was startled that the world was still there, that sight was a sense and I could use it. With some difficulty I made small talk and thanked the artist, who had done a wonderful job.

That night at sumbel I hailed Sunna, thanking Her for the flame. Though it burns low at times, I must tend the fire in my heart. 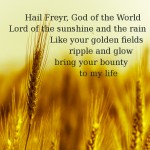 September 16, 2015 Five Simple Ways to Celebrate the Autumn Equinox
Browse Our Archives
get the latest from
Pagan
Sign up for our newsletter
POPULAR AT PATHEOS Pagan
1

“Stay in the Conversation” – Research...
John Beckett
Related posts from Heathen at Heart