The Power of Hope and Change

The Power of Hope and Change February 6, 2017 Molly Khan

On June 26th 2015, the Supreme Court ruled that couples of the same sex were to be granted the same legal right to marriage as couples of the opposite sex. This moment was so intensely meaningful to me, a validation of my core identity that had been summarily rejected throughout my formative years. All the names I’d been called, all the ugly comparisons from family and teachers, all the years of hiding my identity and the ones afterwards where I wish it had stayed hidden; all of that hurt felt soothed, like aloe on a burn.

I told my oldest child that her world was a different place than the one I had grown up in. Of course there were still injustices in the world, but it was moving forward. Things were improving. My generation was doing better than my parents’ had, and hers would do even more good in the world. In the wake of what seemed like such a pivotal, paradigm-shifting moment, I felt like anything was possible.

I’m not sure that I still feel that way. It’s been more than a year since I last wrote here at Patheos. I’ve gone through some ups and some downs in my own life that took much of my attention. Donald Trump’s candidacy in the Republican primaries flew entirely under my personal radar. When he won I almost felt relieved, assured that the social progress of the last eight years would not be undone. There was no way that man could win the presidency.

Life went on. I had a baby. On her twelfth day of life, I sat in the neonatal intensive care unit holding her hand and watching the votes be counted. I was already hurt and vulnerable, dimly aware of her tiny chest rising and falling rapidly, as new worries bloomed in my mind. Did you know premature birth is often called a pre-existing condition by insurance companies?

My oldest came to me the next day with tears in her eyes. Her father’s family is from Pakistan, and she had heard Trump’s campaign promises to ban Muslims from the country. She wanted to know what would happen now. What could I say to calm her fears?

I tell her that I am frightened, but I’ve been scared before. I am angry, but anger is powerful. I had a baby, and any other time in history she would have died. Now she lays beside me, sleeping peacefully, breathing easily. I walked with women and men in one of the biggest protest gatherings my city has seen since I’ve been able to walk. I have heard more, seen more political activism from friends and acquaintances than I have for the past eight years.

If there’s one thing I’ve learned this past year dealing with my own life, it’s that hope is essential. Change didn’t happen the way that I hoped it would, but it is proceeding in fits and starts. There are so many good things in my life to be grateful for. There are so many things that cry out to be changed. I do what I can, and that is all each of us can do.

And yet this comforting platitude, that we must have hope and wish for the world to be better, can be used – by our own minds – to hold us back. It’s the voice that keeps you from calling your senators, that knows others will attend protests and speak out, that makes you feel your vote doesn’t make a difference.

So we find the balance. Fight the good fight. Keep hope in your heart. Keep praying to the Gods, your Ancestors, the spirits of the land; whoever you connect with. I recently attended a ritual with my local Wiccan group focused on the power of word magick. This is what I spoke over my community: that we can be strong in the face of adversity. And that one day, we won’t need that strength. 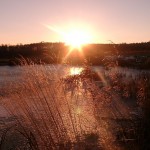 December 15, 2015
Yule is More than the Returning Light
Next Post

February 8, 2017 The Troth Releases Inclusion Affirmation Statement
Browse Our Archives
get the latest from
Pagan
Sign up for our newsletter
POPULAR AT PATHEOS Pagan
1

WitchCraft Cocktails: Persephone's Descent
Through the Grapevine
Related posts from Heathen at Heart