The Origin of “Separation of Church and State” in America

The United States America’s story began in Europe at a time when symbiotic state-church powers owned land and people, controlled ideas, and attempted to crush those who opposed their authority.

By 1517, the Protestant Reformation coincided with revolts throughout Europe that displaced and decimated economies and populations, led to widespread famine and disease, and helped propagate general confusion and distrust about the authority of the government and the church. The Inquisition, The Thirty Years’ War, The Eight Wars of Religion in France, among other conflicts, were not entirely resolved by the edicts or treaties that followed.

By the 17th century, England was facing civil war over control of the crown and the church. The king fought and dissolved Parliament, Catholics and Protestants were killing each other and King Charles I was beheaded. Both king and Parliament wanted a national church.

By 1620, the Great Migration of Puritans leaving England had begun. Among them was John Winthrop, who helped found the Massachusetts Bay Colony and was its first governor. Winthrop metaphorically invoked a phrase from Jesus’s Sermon on the Mount (Matt 5:14), purposing this new colony as a “city upon a hill.” To accomplish this, Winthrop and fellow colonial leaders believed the civil government must prevent error in the church. Paradoxically, Winthrop’s societal construct was similar to that from which he fled.

Roger Williams, an English clergyman and scholar, who had witnessed the turmoil between King Charles and Parliament knew that religious freedom was impossible in Winthrop’s societal model. He insisted that government must be entirely separate from a person’s relationship with God. He argued that governmental authority could not interpret God’s law and any kind of forced worship “stinks in God’s nostrils.”  Involving the government in the church, he contended, would corrupt the church.

The colonial leaders viewed Williams’ ideas as a threat and the General Court of the Massachusetts Bay Colony exiled him, and threatened to kill him. Williams fled during the harsh winter of January 1636. He wrote that he didn’t know “what Bread or Bed did meane” for nearly four months and that he would have died were it not for “the ravens,” his Indian friends.

Isolated, alone, and homeless, Williams made his way to Narragansett Bay. He purchased land from the Narragansett Indians and named it Providence, expressing his “sense of God’s merciful providence unto me in my distress, I called the place Providence, I desired it might be a shelter for persons distressed for conscience.”

American identity would forever be shaped by the struggle brought to its shores: how to delineate individual freedom from governmental authority and how to legalize a separation between the church and government.

Roger Williams sailed to England to procure a legal charter from Parliament for his land, which became the State of Rhode Island and Providence Plantations. In 1644 he relentlessly lobbied Parliament and the general British public, informing them through pamphlets and pubic debate about his vision for society. His rallying cry, “Soul Libertie,” inspired many and resulted in Parliament granting Rhode Island’s charter.

Williams described the true church as a “Magnificent Garden” and the world as “The Wilderness.” He envisioned a hedge separating the “Garden of the Church and the Wilderness of the World,” meaning that once religion and politics mixed, the result was that politics would corrupt the church.

In Providence, Williams relinquished nearly all of the land he had purchased to a town common stock—so that other settlers could have equal property and voting rights. He also drafted a political compact that did not claim to “advance God’s will” or create “God’s kingdom on earth.” It did not establish a church nor did it require church attendance. In fact, the compact did not mention God at all.

While many in Massachusetts were slaughtering Indians, Williams insisted that “It is the will and command of God that since the coming of his Sonne the Lord Jesus, a permission of the most Paganish, Jewish, Turkish, or Antichristian consciences and worships, bee granted to all men in all nations and countries.” Williams, a minister wholly devoted to God and Biblical truth, believed it was “monstrous” to compel anyone to follow his or anyone else’s faith and that “civil power lies in the people.”

In July 1644, Roger Williams published his 400-page magnum opus: The Bloudy Tenent, of Persecution, for cause of Conscience, Discussed, in A Conference between Truth and Peace, in which he detailed his vision for religious freedom and limited government.

His ideas dynamically upended centuries of long-held assumptions about governance. His reasoning, buttressed by ingenious mental acuity, convinced influential men like John Milton, John Locke, Thomas Jefferson, James Madison and the architects of the U.S. Constitution that creating a workable system in which church and state could peacefully co-exist was possible. 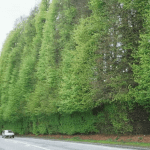 June 26, 2014 The Legacy of the Meikleour Beech Hedge
Browse Our Archives
Related posts from Hedgerow

No one is immortal. What will you do...
For more years than I care to remember I’ve lived near this...
view all Evangelical blogs
Copyright 2008-2021, Patheos. All rights reserved.
Close Ad