The German monk, Martin Luther, upended this entire system, beginning the era of Protestantism, and a movement called the Protestant Reformation, which celebrates its 500-year anniversary this October.

But in what conviction did Luther stake his life, knowing he would be sentenced to death unless he recanted? And why?

For three days in April 1521 the Holy Roman Empire’s most powerful religious and civil leaders tried Martin Luther at a judicial assembly, called a “Diet,” which convened in Worms, Germany. (Thus, the ordeal is referred to as the “Diet of Worms.)” At the Diet, Luther infamously gave his “Here I stand” response to accusations made against him by the Roman Catholic Church, to the Roman Emperor Charles V, to the Pope– and everyone else– that on no uncertain terms would he recant his conviction in the truth of the Bible. He remarked:

“Since then your serene majesty and your lordships seek a simple answer, I will give it in this manner, plain and unvarnished:

“Unless I am convinced by the testimony of the Scriptures or by clear reason, for I do not trust either in the pope or in councils alone, since it is well known that they often err and contradict themselves, I am bound to the Scriptures I have quoted and my conscience is captive to the Word of God. I cannot and I will not retract anything, since it is neither safe nor right to go against conscience.

“I cannot do otherwise. Here I stand. May God help me, Amen.”

Righteousness could not be bought, as the Roman Catholic Church advocated on the streets through the sale of indulgences and a piece of paper stamped by the Pope. Instead, after studying the book of Romans, Luther affirmed that he (and no one) could ever attain “the righteousness of God.” It was only by God’s mercy; only through faith in Jesus and his imputed righteousness that anyone could be saved. Salvation was already purchased by the blood of Jesus on the Cross.

After meditating on Romans 1:17, he wrote:

Justification through faith alone in Jesus, and through God’s grace alone, not through baptism or penance or purchasing indulgences or Hail Mary’s, but through Jesus alone, could anyone be saved. Thus, the first two Solas, Sola fide (Faith alone) and Sola gratia (Grace alone)– became the foundational principle for the identity of believers even today who now have to clarify their faith with the qualifying adjectives: “conservative, evangelical, born again, Bible-believing Protestant followers of Jesus Christ.” 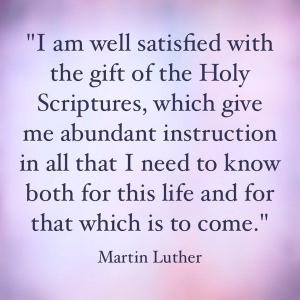 1. The Bible is God’s Word communicated to humanity so we may know and love our Creator. It offers wisdom, hope and guidance for all areas of life.

The Bible is inspired by God, or “God-breathed,” meaning it is God’s Word:

All Scripture is breathed out by God and profitable for teaching, for reproof, for correction, and training in righteousness, that the man of God may be competent, equipped for every good work. (1 Tim. 1:16-17)

2. God’s Word is the sole authority over all of life, the only source of truth about life, and clearly communicates how one can know, love, and spend eternity with God. (Rom. 1:16-17). J. I. Packer clarifies:

“. . . the Bible is both fully human and fully divine. So all its manifested contents – histories, prophecies, poems, songs, wisdom writings, sermons, statistics, letters, and whatever else, should be received as God’s authoritative instruction.”

The Apostle Paul in his letter to Timothy (1 Tim. 5:8) quotes Jesus, identifying the reference of his quote– the Gospel of Luke– (Luke 10:7) as “Scripture.” Likewise, the Apostle Peter referred to Paul’s letters as “Scripture” (2 Pet. 3:15-16), describing Paul’s teachings about Jesus to be Spirit-taught: “This is what we speak, not in words taught us by human wisdom but in words taught by the Spirit, expressing spiritual truths in spiritual words.” (1 Cor. 2:13)

Scripture is not only authoritative, but also trustworthy. The faithful preaching and teaching of the whole counsel of God must be central to all worship. (2 Tim. 4:1-2)

As such, only the Lord Jesus Christ is the only mediator between God and man. (1 Tim. 2:5) No one need pray to, or pay for, prayer or access to God through a priest or anyone else. Likewise, the only sacraments believers should follow are those instituted by Jesus himself: water baptism (Matt. 28: 19-20) and the Lord’s Supper (1 Cor. 11:23-26).

Luther, and millions after him, have staked their lives on this truth. Certainly, he was afraid. But God gave him the courage and protection needed to hold fast to the truth of His Word. A single protest 500 years ago has stood the test of time, continuing to encourage Christians even today. 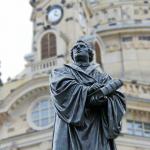 October 16, 2017
The Monk Who Stood Against an Empire and Changed the World [video]
Next Post 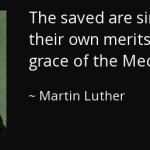 October 23, 2017 Why Sola Christus-- in Christ Alone? [video]
Browse Our Archives
get the latest from
Evangelical
Sign up for our newsletter
POPULAR AT PATHEOS Evangelical
1