Christian students gather at school flagpoles across the country for prayer

Christian students will gather around their schools’ flagpoles and virtually, September 23 at 7:00 a.m. to pray for their schools, friends, families, communities and nation at the annual See You at the Pole™ (SYATP) event.

SYATP is a movement of “students leading students.” It’s based on “The biblical call to RETURN. RESTORE. REVIVE.” 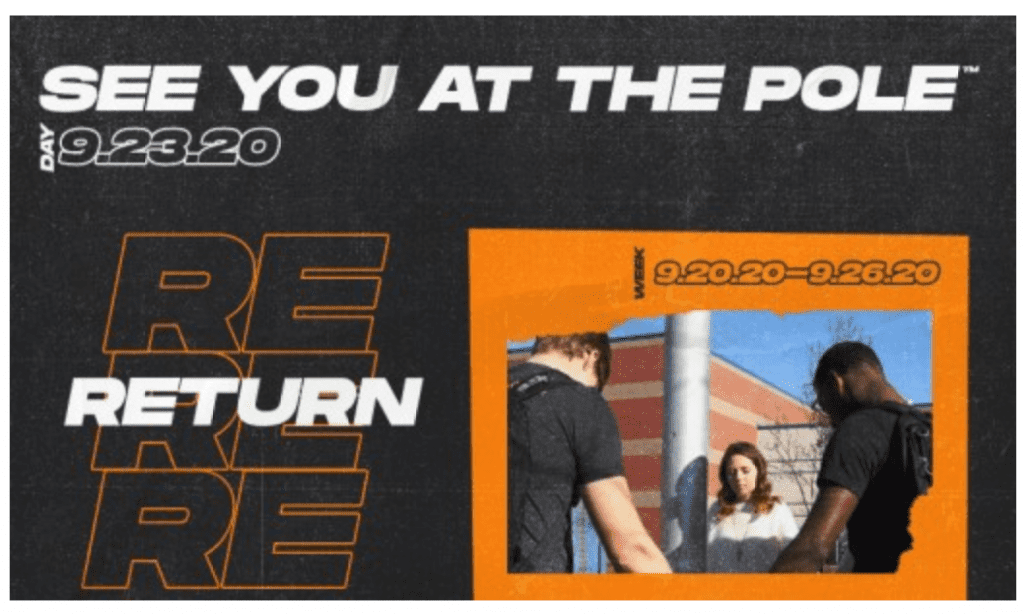 In its 30th year of praying at school flag poles, this year a livestream video will also be available at 7:00 a.m. in each U.S. time zone (including Alaska and Hawaii).

It began in 1990 when ten teenagers in Burleson, Texas, came together for a DiscipleNow weekend.

They drove to three different schools one night, went to the schools’ flagpoles and prayed for their friends, schools, and leaders. They then challenged their peers to pray simultaneously, naming the movement, “See You at the Pole.”

Since then, an estimated one million students from all the world participate in See You at the Pole, the organization states. Students in more than 64 countries, including Canada, Korea, Japan, Turkey, and the Ivory Coast, have participated.

“The First Amendment guarantees students the right to pray individually or in groups on school grounds during any non-instructional time,” the nonprofit religious liberty organization Liberty Counsel argues. “All students may express their opinions verbally or in writing before or after school, in between classes, during the lunch hour or on the playing field, according to the federal guidelines on prayer in public schools,” the organization states.

Liberty Counsel Founder and Chairman Mat Staver said, “These Christian young people are leading the way by example in prayer for their schools, communities and the nation. Liberty Counsel is proud of and supports all students who exercise their constitutional right to pray during the annual See You at the Pole™ event and throughout the school year.”

September 25, 2020 MacArthur prevails in Superior Court, judge rules church is entitled to trial [video]
Recent Comments
0 | Leave a Comment
"So disease killed off all his family and friends and he somehow lucky? Then the ..."
David Brevik Squanto: a story of providence enabling ..."
"We definitely need a return to Christian values in our country. The choice is clear. ..."
US_Constitution RIP 1-31-2020 Texas pastors calling on Christians to ..."
"The United States will never be a clerical fascist armpit like Poland."
Statistics Palin Priest denounces Biden and Harris, offers ..."
"The Catholic Church needs de-nazification. We should start by through BXVI and Georg out of ..."
Statistics Palin Priest denounces Biden and Harris, offers ..."
Browse Our Archives
Related posts from Hedgerow