The U.S.Department of Housing and Urban Development (HUD) has launched “The Mustard Seed Series”– a virtual workshop for faith leaders and congregations, which features faith-based partnerships and projects that provide affordable housing to those in need.

Churches have long successfully helped to create affordable housing, serve the homelessness and work with government agencies to help those in their community. And this new HUD program showcases these successful efforts.

The series provides a forum to educate other faith-based organizations interested in participating in similar efforts. The goal of the series is to pair congregations interested in launching a housing outreach program with those that have already or are continuing to serve their local communities.

Grove Community Church in Riverside, California, for example, has built four single-family homes on its property. As a result of a successful collaboration between city officials and church leaders, four previously homeless families now live in these homes– in The Grove Village. Congregants provide these families with various services in order to help them to gain self-sufficiency, and move into their own homes.

HUD Secretary Dr. Carson explains the reason behind the name of the series, based in the teachings of Jesus in Matthew 17. He said in a recent interview,

“In Matthew 17, faith the size of a mustard seed can move a mountain, and we have some mountainous problems in our country, like homelessness and affordable housing that affects millions of Americans. These are the kinds of problems that used to be handled by the faith-based community. And along came the government and decided that it would be the one to handle these problems and the problems have just mushroomed. One of the reasons that the faith-based community is so effective is because they develop personal relationships. And it’s those personal relationships that are likely to change a person. Because a lot of the people have drug habits and mental illness, emotional issues, all kinds of things that really prevent them from climbing the ladders of opportunity that are available.”

At the inaugural event launching the series, the mayor of Riverside, Rusty Bailey, said, “This joint effort created new housing for our neighbors without homes while respecting and protecting the integrity of the surrounding neighborhood. We are excited to share with the nation what can be accomplished when a local government and a faith-based community work together on an issue of vital concern to both.”

Dr. Carson maintains that President Donald Trump has signed more executive orders to support the faith community than any other president in modern history, and challenges Christians to be part of the solution in helping those in need.

“People of faith have to have courage to stand up, not to hide in the corner and hope that no one notices them. No one takes away their job. That’s where faith comes in. You believe that God will take care of you if you take care of His business,” Carson added.

For more information about the Mustard Seed Series email FaithInitiatives@hud.gov. 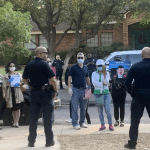