A federal district judge issued a 44-page decision granting an injunction in favor of two churches against Governor Jared Polis’ executive orders that place numerical restrictions on houses of worship and required attendees to wear masks. The order in Denver Bible Church v. Azar prevents the state of Colorado from enforcing the indoor occupancy limitations and the face-covering requirement for the churches who sued in August: Pastors Bob Enyart of Denver Bible Church in Wheat Ridge and Joey Rhoads of Community Baptist Church in Brighton.

U.S. District Court Judge Daniel Domenico, appointed by President Trump, granted the churches’ temporary restraining order and preliminary injunction on the grounds that Polis’ Public Health Order 20-35 violated their rights to the free exercise of religion under the First Amendment of the U.S. Constitution. The judge ruled that the governor’s order treats houses of worship differently than secular establishments, which all pose an equal risk of spreading COVID-19. Specifically, the judge ruled that the numerical limit of only 175 people gathering and the mandatory face-covering provisions were not neutrally applied among nonreligious and religious gatherings.

Church attendees can attend with no limit in attendance as long as they follow social distancing and will not be required to wear face coverings.

He added that the state “does not have the power to decide what tasks are a necessary part of an individual’s religious worship.”

The judge said in response,

He added, the “more serious problem is that Public Health Order 20-35 exempts secular settings that pose similar threats of prolonged exposure from the occupancy limitations and face-mask requirements imposed on houses of worship.”

There is no meaningful difference between a warehouse, restaurant, or an elementary school where employees, diners, and students spend long periods in a closed-indoor setting and a house of worship where people meet for an hour-long service, he noted. The governor’s attendance limitation requirements were not applied to P-12 schools, the JBS meat-packing plant in Greely, the Amazon warehouses in Colorado Springs and Thornton, Home Depot, Walmart, King Soopers, and marijuana shops, he added.

“With each exception Colorado makes for secular institutions, the failure to make the same exemption for houses of worship becomes increasingly problematic,” Judge Domenico wrote. The church, he wrote, “will be allowed to open their sanctuaries subject to the same capacity, social distancing, and masking rules that are applicable to other critical businesses, and will be able to permit congregants to remove their masks if and when it is necessary to carry out their religious exercise.”

The ruling “is a major win for places of worship, the First Amendment, and the people,” Liberty Counsel Founder and Chairman Mat Staver said. “This is a big blow to the discriminatory orders issued by Governor Jared Polis. The state of Colorado may not ignore or suspend the First Amendment.” 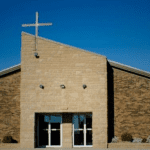 October 21, 2020 Pope Francis breaks from Roman Catholic teaching, endorses same-sex civil unions as homosexual priests are charged with pedophilia and other sex crimes
Recent Comments
0 | Leave a Comment
"So disease killed off all his family and friends and he somehow lucky? Then the ..."
David Brevik Squanto: a story of providence enabling ..."
"We definitely need a return to Christian values in our country. The choice is clear. ..."
US_Constitution RIP 1-31-2020 Texas pastors calling on Christians to ..."
"The United States will never be a clerical fascist armpit like Poland."
Statistics Palin Priest denounces Biden and Harris, offers ..."
"The Catholic Church needs de-nazification. We should start by through BXVI and Georg out of ..."
Statistics Palin Priest denounces Biden and Harris, offers ..."
Browse Our Archives
Related posts from Hedgerow