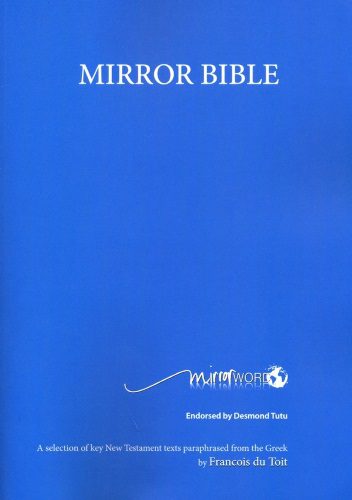 I’m a total geek for English translations of the Bible. And if I’m honest, my favorite versions are almost always those translated by a single woman or man. They carry so much personality in them. I love seeing the theological viewpoints that come through, and discovering how the translator perceives a given passage. Few things make me more excited than discovering a new translation I didn’t know existed.

So I was quite excited indeed, while reading C. Baxter Kruger’s Patmos, to find a reference to something called the Mirror Bible by Francois du Toit. I did a little more digging and found it endorsed by an impressive array of theologians, including Desmond Tutu, Steve McVey, Andre Rabe, and John Crowder, among others. I contacted Francois, and he graciously agreed to send me a copy to review.

This translation is very much a paraphrase, akin to Eugene Peterson’s The Message in terms of creative freedom. But in my estimation, du Toit’s version is often truer to the meaning of the text than is Peterson’s. There are some real gems in here. (I’ll cover a few specific examples below.)

The biblical text itself appears in bold type. Notes are placed in line with the text, in italic type to set them apart. The content of those notes ranges from short clarifications to much longer commentary on the text. Each book is also prefaced with some introductory commentary, and the very end of the book contains extended commentary on a few specific passages.

The physical format of the book has a print-on-demand feel. The “Blue Study Edition” that I am reviewing is quite large (7 × 1 × 10 inches) and includes wide (1.25 inch) margins. The “Red Standard Edition” (which I don’t have in front of me) is listed online as being 5.8 × 1 × 8.3 inches. It’s also available as an app and an eBook. (I’ll include links to the various formats at the end of this review.)

We now come to the actual text of the translation. John starts off like this:

To go back to the very beginning is to find the Word already present there; face to face with God. The Word is I am; God’s eloquence echoes and concludes in him. The Word equals God.

Let’s take a look at verse 14 of the same chapter:

Suddenly the invisible, eternal Word takes on visible form – the Incarnation on display in a flesh and blood person as in a mirror! In him, and now confirmed in us! The most accurate tangible display of God’s eternal thought finds expression in human life! The Word became a human being; we are his address; he resides in us! He captivates our gaze! The glory we see there is not a religious replica; he is the authentic begotten son. The glory returns in fullness! Only grace can communicate truth in such complete context!

Over-enthusiasm for exclamation marks aside, this is such a beautiful rendering.

Here’s the well-known passage of John 3:16–19 for comparison:

The entire cosmos is the object of God’s affection! And he is not about to abandon his creation – the gift of his son is for humanity to realize their origin in him who mirrors their authentic birth – begotten not of flesh but of the Father! In this persuasion the life of the ages echoes within the individual and announces that the days of regret and sense of lost-ness are over! God has no intention to condemn anyone – he sent his son, not to be the Judge but the Savior of the world. Faith and not flesh defines you! In the persuasion of your authentic sonship there is no separation or rejection! For someone to prefer not to embrace this is to remain under their own judgment sustained by their futile efforts to define themselves through personal performance. In their stubborn unbelief they reject what is revealed and redeemed in the Name of the son, begotten only of the Father and not the flesh. And this is the crisis: the light is here right now, yet people are so addicted to their own darkness that they prefer a life of labors, annoyances and hardships!

When we get to the story of the woman caught in adultery, Jesus’ response to the woman (John 8:10–11) is rendered this way:

When Jesus stood up again, there was no-one there except the woman. So Jesus asked her, “Where are they? Has no-one condemned you?” She answered, “No-one Lord!” And Jesus said to her, “Neither am I condemning you – go and sin no more – never again believe a lie about yourself!”

That last line is explained in a note, “The word translated sin, hamartia from ha, negative or without, and meros, portion or form; thus distorted pattern – the root of sin is to believe a lie about yourself.”

Romans 8:28 is a verse I’m always eager to check in new translations, as so few of them get it right. Most versions roughly follow the King James, “we know that all things work together for good to them that love God,” which incorrectly implies that God plans every event (including the horrible ones) and that he does so for greater good of only those who love him (to the exclusion of those who don’t).

The The Revised English Bible provides a much better example, “in everything, as we know, he co-operates for good with those who love God,” correctly explaining that God works with his people in all events (including the horrible ones, which he did not plan) in order to bring about the greatest good for all people (including those who do not love him).

With that in mind, here’s how the Mirror Bible renders this verse:

Meanwhile we know that the love of God causes everything to mutually contribute to our advantage. His Master Plan is announced in our original identity.

I skipped these verses since they are certainly not in the context of the gospel that Paul preached. Paul understood that when Jesus died, all died; he therefore no longer knew people from a human point of view [See 2 Cor 5:14,16]. He declares in Galatians 3:28 [RSV], “There is neither Jew nor Greek, there is neither slave nor free, there is neither male nor female; for you are all one in Christ Jesus.” I had no liberty to translate these verses. These thoughts seem to have been added somehow by some church father to justify the tradition of the day where women had to show their submission to their husbands by wearing a head covering.

On the one hand, I applaud du Toit’s willingness to push back against the inconsistency in this text. He is certainly correct that a mandated head covering for women would be incompatible with the freedom found in Christ. On the other hand, I fear that by removing these verses entirely, we are missing out on the important fact that women were indeed publicly praying and prophesying in the church! For myself, I accept this text as authentic, while readily acknowledging that we should not follow its advice.

2 Timothy 3:15–17 is on the higher end of liberties taken with the text. But I have to say, I love how it turned out:

The sacred scriptures that you were raised with from your mother’s womb dynamically pointed you to the explicit clarity of salvation! God’s belief was always wrapped up in Christ Jesus! Jesus Christ and his work of salvation is the theme of scripture. The value of scripture in its most complete context is always found in God’s prophetic voice inspiring a thorough education in the revelation of righteousness! This is what carries the breath of God and gives substance and proof to accurately gauge what is being taught. Being thoroughly schooled in the word of righteousness will equip you to be fully refreshed in sparkling newness of life, giving you a fresh start to tackle every relevant and good task with renewed inspiration.

And the Mirror Bible rendering of Hebrews 1:1–3 is well worth taking a look at:

Throughout ancient times God spoke in many fragments and glimpses of prophetic thought to our fathers. Now, the sum total of this conversation with us, has finally culminated in a son. In his sonship, God declares him heir of all things. He is, after all, the author of the ages. We have our beginning and our being in him. He is the force of the universe, sustaining everything that exists by the logic of his eternal utterance! Jesus is the radiant and flawless expression of the person of God. He makes the glorious intent of God visible and mirrors the character and every attribute of God in human form.This powerful final utterance of God is the vehicle that carries the weight of the universe. What he communicates is the central theme of everything that exists. The content of his message celebrates the fact that God took it upon himself to successfully cleanse and acquit humankind. The man Jesus is now his right hand of power, the executive authority seated in the boundless measure of his majesty.He occupies the highest seat of dominion to endorse our innocence! His throne is established upon our redeemed righteousness.

There are so many great snippets like these that I could keep pulling out, but I’ll wrap it up with just one more from one of my favorite passages, 1 John 4:16–19:

And thus we have come to know and believe the love that God has unveiled within us. God is love; love is who God is; to live in this place of conscious, constant love, is to live immersed in God and to feel perfectly at home in his indwelling. So now, with us awakening to our full inclusion in this love union, everything is perfect! Its completeness is not compromized in contradiction. Our confident conversation echoes this fellowship even in the face of crisis; because as he is, so are we in this world – our lives are mirrored in him. Fear cannot co-exist in this love realm. The perfect love union that we are talking about expels fear. Fear holds on to an expectation of crisis and judgment and interprets it as due punishment! It echoes torment and only registers in someone who does not realize the completeness of their love union. We love because he loved us first!

In conclusion, the Mirror Bible is a wonderful translation with some more room for improvement. Obviously, the New Testament is not complete yet, but once it is, I think a professional editor could work wonders at tightening up the prose, fixing the occasional typo, and perhaps cutting back on those exclamation marks. Given the understanding that this is a work in progress, I love what I’m seeing so far, and I look forward to seeing its future progress!

You can pick up your own copy of the Mirror Bible in any of the following formats: 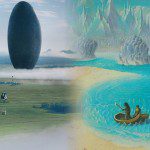 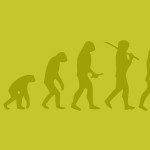