To be perfectly honest, I haven’t talked about hell in years. Not really. Not since my exit from fundamentalist Christianity.

Sure, I’ve spent plenty of time parsing out the nuances of the different views on hell, and explaining why I see it as something God intends to ultimately lead to universal reconciliation. Yet I haven’t just presented hell, in itself, as much of anything to fear or worry about experiencing.

But—and this is a major but—I also have to wrestle with the fact that Jesus himself doesn’t tend to treat hell quite like I do. I don’t mean to suggest that I am now recanting my overall view on hell, and I don’t mean that Jesus speaks against the view I hold. I absolutely believe that scripture, taken as a whole and interpreted with the character of God as revealed in Jesus, points toward a hopeful eventual reconciliation of everyone. However, in the most immediate context of the passages where hell and judgment come up, such reconciliation is rarely the focus.

When Jesus preaches hell, he’s usually pretty pissed. And he has no qualms about threatening wrongdoers with the prospect of a particularly undesirable experience.

So maybe, rather than immediately rushing in to clarify what we think Jesus means by hell, we should instead take a look at what gets Jesus so worked up in the first place.

The standard Evangelical teaching is that hell is a place for those who don’t believe in Jesus, and there are a few passages that can be read that way on the surface. But they are the minority. More often than not, biblical references to hell and judgment are in response to social evils carried out in the here and now.

Any of this sounding familiar yet?

And it’s not just Jesus. All throughout the Bible, the threat of God’s judgment is tied to social injustice. Take, for example, that infamous sin of Sodom, for which fire and brimstone rained from the sky. Scripture could not be more clear:

This was the guilt of your sister Sodom: she and her daughters had pride, excess of food, and prosperous ease, but did not aid the poor and needy. They were haughty, and did abominable things before me; therefore I removed them when I saw it. (Ezek. 16:49–50)

Could something written 2,500 years ago possibly better describe what is going on at the border today?

If Jesus were walking the earth right now, what do you think he’d be saying? Based on what he said last time around, I’m pretty sure he’d be preaching hell.

If we progressive Christians are going to be truly Christlike, we just might need to start preaching hell again too. The time has passed for gentle rebukes to those involved in the kind of atrocities we’re seeing.

Woe to you: Donald Trump, Mike Pence, ICE, and all those complicit in the illegal and inhumane detaining of immigrants in concentration camps! Woe to you who separate children from families! Woe to you who cause such little ones to stumble! Woe to you who deny water to the thirsty! Woe to you who imprison the strangers in your midst—the very ones coming to you for refuge! How will you escape the fires of hell?

Woe to you: Jerry Falwell Jr., Franklin Graham, and other Evangelical leaders—hypocrites! Woe to you who stand by in the face of such evil, and declare God to be on your side. I tell you truly, you have never known my Christ. Repent, or you too will be liable to the judgment of hell! 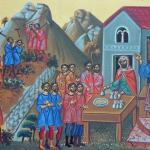 August 23, 2020 The Big Book of Hippie Heretics (Daneen Akers' Holy Troublemakers & Unconventional Saints)
Recent Comments
0 | Leave a Comment
"Yeah, and bankers never suffer the consequences of their bad decisions that led to the ..."
Medalcollector Jesus Was a Socialist
"Masks in general don't work ... They don't work to prevent caterpillar-damage to garden plants. ..."
San_Ban It Isn’t Scapegoating if You’re Guilty
"The largest employer in America just declared $514B in revenue on 2/19/19 while 15% of ..."
Michael Wilson Jesus Was a Socialist
"The other countries that Venezuela is selling its fuel to is largely America. Venezuela has ..."
Michael Wilson Jesus Was a Socialist
Browse Our Archives
Related posts from Hippie Heretic