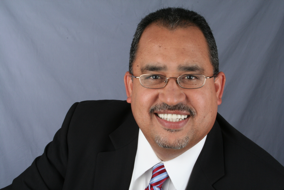 The Reverend Emilio A. Reyes is Executive Director for Multi-Language Ministries at American Bible Society; a non-profit organization founded in New York City on 1816 and dedicated to making the Bible available to every person in a language and format each can understand and afford so all people may experience its life-changing message.

Since joining the American Bible Society in 1994, Rev. Reyes has served in various roles, including Distribution Coordinator, Associate Director of Volunteer Ministries, Director of Latino Ministries, Vice President for Latino Ministries, Vice President for International Ministries, and Vice President for National Ministries.  In these eighteen years of service, he has helped increase the organization’s reach and influence throughout the USA and abroad.  He developed several programs such as the “The Bible Is My Guide” national advocacy campaign which partnered with Christian groups and celebrities to encourage followers of Jesus to interact with the Holy Scriptures.  “24 Hours with the Bible” is an annual program which broadcasts the dramatized New Testament in New York, Miami and several countries in Latin America.  As the host of the popular Spanish-language radio program, “Palabra Eficaz” (The Effective Word), Rev. Reyes connects daily with thousands of Spanish-speaking persons through a network of more than 300 domestic and international radio stations.  He has provided support for local pastors and leaders through the “Minister Actualization Seminar”, a program he launched and for which he serves as a speaker.

Reverend Reyes has served on several boards of directors including, but not limited to Esperanza USA and the Americas Region of the United Bible Societies.

Rev. Reyes is an ordained minister with the Assemblies of God.  He holds a Bachelors of Theology (Th B) degree from the Latin American Theological Seminary and an Honorary Doctorate in Divinity from Latin University of Theology.  Rev. Reyes has over thirty years of executive and pastoral experience.  He has ample knowledge in publishing, sales and marketing, having worked as an adverting account executive in New York City.  He has also served as a presiding leader in the Spanish Evangelical Publishers Association.  Rev. Reyes has founded three churches: Metro Assembly of God (Spanish-speaking group) in Brooklyn, NY, International Christian Center in Oakland Park, FL, and, the most recent, Iglesia Saluz, a virtual community of faith.  He has served his denomination in various capacities, including Youth Director, Presbyter and General Presbyter of the Southeastern Spanish District.  He has traveled extensively through North, Central and South America, the Caribbean and Europe dictating conferences on Christian education and leadership.  He is a musician, composer, and author.  He has written three books and four of his songs have been recorded by prominent Christian singers, such as Marcos Witt, Jaime Murrell, Marco Barrientos and Fermín Garcia, Jr.

Rev. Reyes and his wife Lillian have two children and four grandchildren.  He considers his responsibility with American Bible Society as a divine challenge by having the opportunity of using various mass communication tools to reach the world with the infallible and eternal counsel of the Word of God.  Quoting 1Timothy 1:12, Rev. Reyes says: “I thank him who has given me strength for this, Christ Jesus our Lord, because he judged me faithful by appointing me to his service.”

<< Back to Contributors Page