It’s been more than two years since I posted this.  In that time, my fear that our kids would turn out to be weird if we homeschooled has largely disappeared.  Now, I just embrace the fact.

Why Homeschooled Kids Are Weird, September, 2010

Eleven AM and we are trying to get out the door to go to Chuck E Cheese for PE today. (Hey – we’re experiencing rain of biblical proportions down here, and I contend that skeeball is as athletic as square dancing or calisthenics or whatever else they do in PE. And before you judge, let’s not forget what happened to those who mocked Noah’s plan to deal with the flood.)  As I’m grabbing the keys, an unnamed child of mine asked if he could wear his power ranger costume that he got from his cousin yesterday.

“No, honey.  We’re not gonna wear a costume today.”

He nodded assent, dropped his head, and walked away.  And I felt like a jerk.  Why exactly couldn’t he wear a costume?

The truth is that I don’t want him to wear a costume because I always fashioned myself one of the cool kids, and I want him to be cool, and cool eight-year olds don’t wear costumes to lunch. And, yes, I know it’s pathetic.

Still, I wondered how to respond. Let him wear it, and to hell with what other people think?  Help him understand why most people wouldn’t wear a costume?  Insist that he conform (as I had when he was two and wanted to wear black patent leather shoes with a pink flower attached)?

One of the loudest alarms sounded in response to our decision to homeschool has been, “But what about socialization?”

To which I always reply with the party line:

Socialized to what?  Sitting in rows all day with people the exact same age as you and filling out worksheets?  Have you seen any research that indicates that home-schooled kids are less well-adjusted than their institution-schooled peers? No?  That’s because there isn’t any.  And who is going to socialize them to have the character we want them to have better than we are?  And, by the way, just how do you think all of humanity was socialized for the gazillions of years before public schools came to be?

Here’s the problem with the party line:  Home-schooled kids are weird.

But here’s the thing.  I’m pretty sure homeschool didn’t made them that way.  And in all of the ways that homeschool may have contributed to their lack of social conformity, I’m not sure it’s a bad thing.

First, lots of parents who homeschool are weird.  They always have been. School was torture for them, and they didn’t want to inflict it on their kids. So these weird parents raise weird kids and don’t put them in school. And they are having a blast.

Second, lots of weird kids with not weird parents get home-schooled because the parents can’t stand to see their kids ridiculed or bullied any longer.  Or, the weird kids who fail everything that doesn’t have to do with the War of 1812 convince their not weird parents to homeschool them so they can devote more time to writing their dissertation proposal.

Third, if you want to help your kids be cool, or at the very least fit in, they are going to need to face lots and lots of peer pressure to conform.  And homeschool just can’t provide that.  You can meet with plenty of other home-schooled kids at the park.  But those kids are too nice to make fun of your kid’s “unique” speech patterns or fashion sense or inept social skills.

It’s that last reason, the lack of peer pressure, that gave me pause when we pulled our kids out of school.  One of our kids, who shall still remain nameless but will be obvious anyway, is weird.  Always has been.  He’s sweet.  And smart.  And responsible.  And weird. He doesn’t pick up social cues.  He’s really anxious and so drives everyone crazy with rule enforcement and clock watching.  He doesn’t often understand jokes and his attempts at humor break my heart.  So of course I should want to keep him out of school.

But I feared that if we pulled him out, there would be no holds barred on his weirdness. Who would make fun of him for wearing those awful clothes he chooses everyday?  Who would roll their eyes and suck their teeth when he repeatedly interrupts their conversations?  Who would model for him what cool boy friendships look like?  And who would tell him not to wear the power ranger costume to lunch?

Fo today, I decided that it wouldn’t be me. I would resist my very strong urge to make him just like all of the other kids. (As if I ever had that power.)

I called him back and told him he could wear his costume.  He lit up and wore it with relish, face mask and all.

So I have no doubt about why home-schoolers are weird.  But I also know that they look really cute playing skeeball in a red superhero outfit. 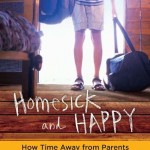 5 Sexy Ways to Get Your...
Ashley Willis
Related posts from The Homeschool Chronicles

5 Ways to Communicate With Your Partner By...
Many couples struggle with regrettable incidents and argue about the same things...
view all Family blogs
What Are Your Thoughts?leave a comment
Copyright 2008-2020, Patheos. All rights reserved.