Ezra could tell something was up.  It was Saturday morning at 7:30 and not only was I awake, but I had on clothes.  Clean clothes.

“Why are you dressed like that?  Where are you going?” he asked.

“I’m going to a dyslexia conference, to learn more about teaching kids with dyslexia.”

I followed this with a wink and a smile.  He and I both knew who had dyslexia.  And we both knew that dyslexic brains are special.  Dyslexic kids are creative, out-of-the-box thinkers.  Dyslexic kids invent intricate ways to do math in their head so they don’t have to look at all of those symbols swimming around the page.  Dyslexic kids are poets and storytellers and artists.

Yes, reading and writing kick Ezra’s butt.  But we are mastering the challenge.  Together.

Ezra beamed, and I left thinking my face should grace all future #1 Mom mugs.   Even if I learned nothing new, Ezra would know that his mom loved him and wanted him to thrive.

As soon as I left, though, Ezra announced, “I love when Mommy goes to these meetings.”

“Because when she goes to those meetings she is 90% nicer to me for a month.”

At which point my #1 Mom mug came crashing to the floor.

Ezra has realized that while I might like to talk about the quirky and special nature of his brain, the truth is that the storm of dyslexia and anxiety and ADHD taking place in that brain affects our family more than I care to admit.  His disabilities perplex me, and all too often enrage me.  Spending the day with educators who understand those disabilities far better than I do, softens my response to their negative aspects.

Imagine what it’s like to know you are doing the best you can (or something close to that), and your mother is turning red and mumbling under her breath, “Help me, Jesus, before I put his head through a wall.”

I want him to do something as simple as copy a sentence from a website, and it takes twenty minutes and lots of tears.  I assume he is being lazy and defiant.  He assumes he’s stupid because he can’t fulfill my request.  I want him to get his head out of the book he’s been buried in for the last forty minutes.  I ask him three times to no response, at which point I grab the book from his hand and ask sharply, “Why is it that if I don’t treat you like a jerk, you won’t listen to me?”

His eyes tear up and he responds, “I didn’t hear you, Mom.  Honest.”

One of the talks on Saturday was by Kelly Lowry, a neuropsychologist who works with kids who have dyslexia, anxiety, and ADHD, a common disability tri-fecta . As she described what teachers need to do to help them, I felt like she was punching me in the gut.  Her list of unhelpful behaviors?

Yup, I do all of those.  Her list of helpful behaviors?

As Ezra predicted, I left the conference with renewed resolve.  And I’ve been at least 87% nicer for the last five days.  If he’s right that we only have twenty-three days left until I forget what we’re dealing with, I need to sign up for another conference by May 18.  Either that or pray that God would help me change my oppositional behavior.  Given how little hope I have for that, I’d appreciate your prayers to that end.  So would Ezra.

April 29, 2013 We're Raising a Nation of Incompetent Narcissists
Recent Comments
2 Comments | Leave a Comment
Browse Our Archives
get the latest from
Family
Sign up for our newsletter
POPULAR AT PATHEOS Family
1 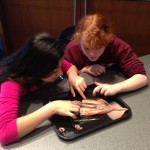 Family
Day 14: Just Do SOMETHING
The Homeschool Chronicles

Family
Rick Riordan Was A Homeschooler?
The Homeschool Chronicles 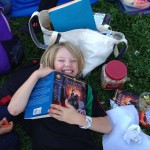 Family
An Open Letter To Rick Riordan From A...
The Homeschool Chronicles
TRENDING AT PATHEOS Family