I have been in Centennial Valley in Montana, a very remote and marvelously beautiful valley that lies some 40 miles or so west of West Yellowstone and that is home to the Red Rock Lakes National Wildlife Bird Refuge and the Environmental Humanities Education Center. I have been honored to co-facilitate a workshop on Ecospirituality with Reverend Tom Goldsmith of the Unitarian Church in Salt Lake City. I wish to share some of what has transpired at this wonderful event. Our small group is gathered in Lake View, an old ghost town that has been resurrected, thanks to the work of John and Melody Taft who have created there The International Center for Earth Concerns. 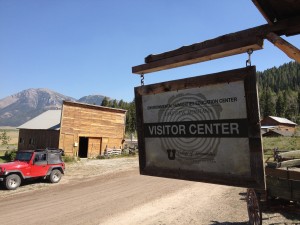 Tom kicked things off in the morning by giving a tour de force speech about the challenge we face in defining ourselves and our humanity in relation to environmental degradation and global climate change. “Who do you think you are?” was the question he posed, challenging us to find less arrogant, less individualistic, and less selfish understandings of our place in the universe. How we understand the story of the cosmos is crucial, he argued, to how we develop an ethical framework that motivates our behavior. Our ethical framework, he argued, then facilitates the emergence of our spiritual practices. It follows that our cosmology matters since it goes a long way in shaping our self-understanding and our understanding of our responsibility to the world. Be careful, he was saying, about what credence you give to stories because they shape your ethics. 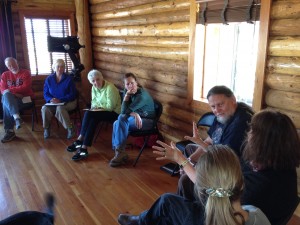 It was clear within the first hour that there are differences of opinion about spiritual and religious matters among our group, a group that includes Christians, Unitarians, a Daoist, a Methodist, and others who don’t define themselves by sect or congregation but by general spirituality. However, there is a common thread that brings us together: we are determined to cultivate a more profound understanding of the natural world as well as the dimensions of spirituality, and to strengthen our ethical commitments to preserving, restoring, and sustaining the natural world. Some disagreements arose around the question of whether or not the Judeo-Christian tradition—particularly its story of the world’s beginnings— is adequate to respond to the crises we face. We had read Lynn White’s famous 1967 essay, “The Historical Roots of Our Ecological Crisis,” in which White argues that what he believes to be Christianity’s mistaken wholesale rejection of pagan animism—its conclusion that the world is for humans alone and is merely dead matter— led it to become a worldview that has inspired exploitative attitudes toward the environment. Since White believed that environmental degradation was essentially a problem caused by religion, he nevertheless argued that needed either a new religion or to rethink the old ones in order to produce a worldview and a cosmology that grant greater subjectivity and holiness to the physical world. There is no concensus about the validity of White’s thesis, however, but it did spawn a massive response among religious thought leaders, creating the field we know today of ecotheology. One participant suggested that her attention to the Christian tradition has taught her to tread more lightly on the earth and that it is our mentality more than our beliefs that matter. But we didn’t come to any conclusions about why many Christians are indifferent or even hostile to environmental stewardship. Tom invoked the theologian Thomas Berry’s claim that the Genesis account was in need of an update, that we needed a cosmology that was more responsive and relevant to the crises we face today.

I agree that we need a worldview that is more open to science, but for me it doesn’t seem to me necessary to conclude that in order to become more responsive to the earth’s needs we need an entirely different cosmology. Besides, I don’t see how humanity is ever going to come to agreement on the true story of the earth’s and humanity’s beginnings, so when it comes to the goal of better collective environmental ethics, I would prefer not to argue over which one is right. Perhaps we could simply state that every religion or philosophy needs to be mined for its ecological wisdom. How we read and interpret stories of our origins—whether they come from science or organized religion—is more important than the particular content of those stories. Tom believes the Judeo-Christian story is simply too anthropocentric, too focused on individual salvation and a relationship to a personal God to be effective in producing the kind of ethics we need today. This was a tough challenge to my own view, but I respected where Tom was coming from. He was not interested in showing disrespect for Christianity but was merely calling for greater commitment to selfless service on behalf of the entire human family and the entire more-than-human community of which we are a part.

I certainly am on board with that goal, but I come at it from a perspective that is animated by the Christian response to environmental degradation and by my own Mormon beliefs. After spending last semester reading The Seven Pillars of Creation: The Bible, Science, and the Ecology of Wonder by William Brown with a great variety of faculty across campus at BYU last semester, we were at least convinced of Brown’s fundamental thesis: the Bible can handle the challenges of science. We need not conclude it is irreconcilable with what we now know about evolution, chaos theory, climate change, or species extinction. We need merely to read with greater urgency, adapting the stories to our current understandings to see what kind of fruit they bear. Of course, this implies that we should do more than read scripture. We should be literate in science, curious about philosophy, and eager to understand our current world as well as we can. We should recognize that God’s word and wisdom can be found in all disciplines and cultures and that if we are serious in our devotion to the truth, we should be eager to welcome it from wherever it comes. That, at least, seems consistent with what I understand Mormonism to be. Why we don’t always practice learning with such universal thirst is, of course, a key question. Why can’t we simultaneously believe in what we hold to be true and believe that there is much we have yet to understand?

I am honored to have the chance to wrestle with these questions, with people of good will with whom I share many common values, especially a commitment to care for the earth and all living things. No one in the workshop seems to think it is necessary for us to agree on these theological questions to be able to work together to improve the environmental conditions of life, but we have learned the value already of offering tough and valuable questions to one another to aid us in our quest to be more environmentally aware, more spiritually sensitive, and more committed to promoting environmental health. One participant concluded our discussion wisely that what matters is that we “be here now,” that whatever our beliefs, we don’t allow the past or the future to become more important than our responsibilities to the sufferings, injustices, and degradation of the present. 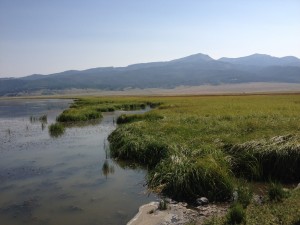 Our afternoon was spent visiting the bird refuge where we saw antelope, Great Blue Herons, Yellow-Headed Blackbirds, Sand Hill Cranes, American Coots, Peregrine Falcons, Prairie Falcons, White-Tailed Hawks, American White Pelicans, and others. In the evening we enjoyed a presentation by Frank Carter, a student of Terry Tempest Williams, who just completed a 500 mile trek on the Appalachian Trail. He sang, showed paintings, read from a nature journal, and showed slides with an audio recording of the sounds of the eastern forest. His was a reminder of the power of walking on our perception of the world and our thought process.

Stay tuned for a report on Day #2! 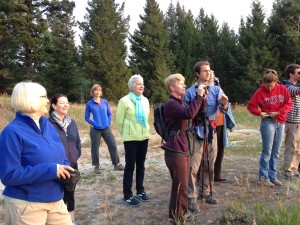 August 19, 2012 Ecospirituality Workshop (Day #2)
Recent Comments
0 | Leave a Comment
"Watch, the hour is nigh ( Mark 13). The disciples are commanded to watch, for ..."
Hunter Perreira Obedience as Gratitude
"sounds to me like agenda 21 mixed with mormon doctrine......so what is being taught here......philosophies ..."
Sean Shafer Environmental Stewardship and Mormon Belief
"Thank you for sharing this beautiful, thoughtful article! Understanding that I don't have to earn ..."
Teresa Jones Obedience as Gratitude
"George, this is your old friend, Gary from MP a long time ago.I like your ..."
outdoorsguy On Disagreements at Church
Browse Our Archives
Related posts from Home Waters