Reading Literature as a Religious Practice 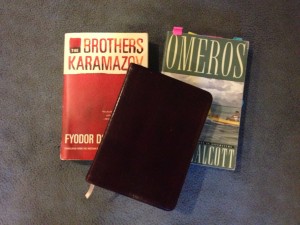 A course devoted to reading the Book of Mormon as literature made headlines recently. As happy as I am to see such a course, I don’t really see why this should be news. I guess maybe it is news because it implies, for some people, that the book has somehow been demoted from its sacred status. I don’t see why or how this is the case. In my mind, to read something “as literature” can only mean reading it with careful attention to what it seems to be saying by paying attention to how it says what it says. I taught portions of it as literature when I was in graduate school in Berkeley many years ago. It was great fun. As far as its literary merit is concerned, I don’t find the Book of Mormon particularly beautiful. It doesn’t compare, for example, very favorably to much of the beauty we find in Psalms, Isaiah, Job, Proverbs, or Ecclesiastes. And its human stories are not quite as perplexing and enigmatic and grittily human as they are in the stories of Joseph, Abraham, Job, or David, to name a few. Women, too, are hard to find in its pages. Its literary merit lies, for me, in its epic sweep of interracial conflict, its amalgamation of texts that leads to its own self-conscious metatextuality, and the implications of this metatextuality for the idea of continual revelation. Of course, it is a superb book of doctrine and theology, as well. Nowhere have I found the meaning of the atonement so well articulated.

I am more interested, however, in a different kind of question. In my most recent research, I have been amazed to discover how deeply invested poets and novelists are in arguing over theology through their literature. It is true that some writers seem to want to make strictly secular claims, but even in so doing they can’t escape making at least implicit arguments about the deepest questions of human existence and providing an expansive view of their idea of the cosmos. Other writers seem to rather purposely confuse any distinctions between the sacred and the secular. In this case, literature seems more invested in a kind of exercise in midrash, a taking up the themes and concerns of sacred literature and developing them further by extending the narratives of the Bible, imagining and fleshing out scenarios that are only implicit in original biblical accounts, or simply exploring a theological principle in its practical application in the lives of particular individuals in particular contexts. In sum, I wish to read literature as theology.

From the perspective of religious belief, this should make perfect sense. Theology, among other things, is the attempt to understand the significance of belief as it is manifested in particular and shifting contexts. There doesn’t seem to be a better opportunity for such learning than that provided by literature. Literature is always stuck in the mud of experience. It bears its very human and earthly stains with intention. It asks us to examine lives one at a time and gives us pause to jump to quick generalizations. And yet it is driven, simultaneously, by an intense urge to locate transcendent meaning in those contexts. Not every religious person would agree with me on the value of secular literature, however. To read literature as theology potentially implies a subordination of the authority of sacred writ. Why do we need literature when we have the Truth? Why read the words of men and women when the word of God is sufficient? Is there not an inherent danger in elevating the secular to such a high status? Do we not miss the mark? These are valid questions, but a strictly intolerant view of secular literature as fallen and as deceptive rejects outright the notion that God’s light of truth might or could be shed anywhere else except on the lives of a few famous biblical figures. Such an attitude ultimately implies that no education, outside of religious education, is necessary. Of course, there are those who take such a position, but in the Judeo-Christian and Islamic traditions, which have sponsored the growth of the modern university and the development of the human sciences and which have inspired generations of artists, dramatists, poets, musicians to craft new ways of telling the old stories, this form of belief is an outlier. If Christians believe in general education, if they read at all beyond the Bible, if they claim to like listening even to Bach, then they at least implicitly recognize that the idea of a self-sufficient and closed canon is absurd, that God’s work of revelation is ongoing and that it cannot and will not cease as long as our particular circumstances continue to change and as long as we continue to seek understanding.

From a strictly secularist position, however, to read literature as theology might also seem out of bounds. Many critics prefer the idea that their devotion to language and culture is the secular alternative to the old-time monastic life of the study of the Word. (I myself remember coming to a realization in graduate school that this is what I had become: a modern day monk, poring over texts day and night and straining for every bit of light of understanding I could get. It was also the moment when I committed to taking my study of the scriptures at least as seriously as my study of literature, even if I couldn’t give it the same amount of time.) But many years ago now, Giles Gunn argued that “no serious literature is neutral either to the question of belief or to the question of the relationship between belief and understanding.” He noted that when we write, read and interpret, we are “attempting to assess the actual in light of its full potential for comprehension” and in so doing “we thereby re-enact one of the chief functions of culture, if not religion.” This notion of a kind of religious criticism of literature never really took root among literary critics, however. But this is not because authors are no longer interested in religious questions. How can anyone read Cormac McCarthy and not notice how obsessed the man is with theology? How can we miss the enormous contribution Marilynne Robinson has given to modern Christian thought, just through her novels alone, if not through her essays? Why would we enjoy the poems of Mary Oliver and fail to recognize the new cosmology she seeks us to be reborn into? We don’t see these things because, unfortunately, there are increasing levels of ignorance about religious traditions generally and about the Bible more specifically, increasing specialization whereby religion is studied by religious studies scholars and literature by literary critics, and a growing distrust in and distaste for anything that smacks of metaphysical hope. This is because somewhere along the line in the last forty years, it was unfairly decided that the root of many of our social and environmental problems is the continued importance of notions of faith, metaphysical belief, and religious practice in society. For this reason, I wish I had had the chance to read critics like Alan Jacobs when I was in graduate school.

Religion is a contributor to many of our problems today. I don’t dispute that. All the more reason to get it right. And all the more reason to learn as much as we can about how to test the meaning and value of our lives against the ultimate questions in ways that will get the results we want: a humane, compassionate, and just society where opportunities for human flourishing are universally available both now and for future generations. In this sense the message of the Book of Mormon seems to be most appropriate: God’s word can only make sense to us through a kind of perpetual experimentation, through new acts of translation of truth into varied contexts across the whole globe. To love God and his word, I must learn to love God’s children, their languages, experiences, and cultures. A Christian, among other things, ought to be touched by an insatiable taste for books.

August 15, 2013
An Appeal To Those Concerned But Not Yet Alarmed By Climate Change
Next Post

September 1, 2013 Science, Faith, and Policy
Recent Comments
0 | Leave a Comment
"Watch, the hour is nigh ( Mark 13). The disciples are commanded to watch, for ..."
Hunter Perreira Obedience as Gratitude
"sounds to me like agenda 21 mixed with mormon doctrine......so what is being taught here......philosophies ..."
Sean Shafer Environmental Stewardship and Mormon Belief
"Thank you for sharing this beautiful, thoughtful article! Understanding that I don't have to earn ..."
Teresa Jones Obedience as Gratitude
"George, this is your old friend, Gary from MP a long time ago.I like your ..."
outdoorsguy On Disagreements at Church
Browse Our Archives
get the latest from
Latter-day Saint
Sign up for our newsletter
Related posts from Home Waters