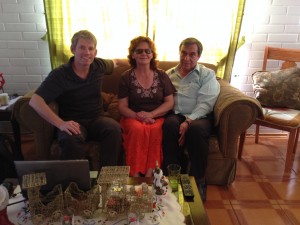 I am currently on a research trip to Chile for a novel that I am writing. It is a story about a young LDS Chilean woman, an MFA student at BYU, who was raised in Utah but who in 2002 returns to her birthplace in Chile to seek the story of her missing father. It is also the story of an unlikely friendship between her and a wise and cranky and lonely older Utahn man who hires her to paint wildflowers for his magnum opus, a field guide of Wasatch wildflowers. There you have it in a nutshell.

So far, I am having quite an adventure in Chile. It has only been two days, but as soon as I landed, actually as soon as I took off from Salt Lake, I have wanted to do nothing else but write. Which is a great feeling. There is so much to figure out in the lives of my characters, but it is incredibly fun. I never realized what a difference it is to write fiction, compared to memoir or poetry, both of which seem much more internal to me than trying to create a world in which people move and speak. Writing a novel is requiring a lot more listening to others and a lot lessing to oneself, more learning about what people do and what happened when and so on. I like it. Instead of being drawn inside of myself, I am drawn out. I don’t mean that poetry or memoir are selfish, but they are more directly centered in one’s individual experience often than what it requires to narrative multiple lives in multiple places. I listen more intently to others, and I try to pay more attention to visual appearances of things–people’s faces and expressions, the built environment, everything around me. I still don’t know if I am any good at it, but I don’t care. Just gonna go with it. I wrote in my journal to help motive me: “I can do this. I will do this. Believe in yourself. Trust in God. Be good.” My daughter teased that I was trying to find my soul. Not sure it was ever lost, but no doubt it could use some refinement.

I have wandered down many of the same streets in Santiago where I spent my time doing research on previous trips, only now I am really here to see it, to absorb it. I think before I was always on an errand, on my way to some place, some library, or to meet some expert I wished to meet. I hardly did any serious reconaissance about the city. This time I intend to see more museums at least. 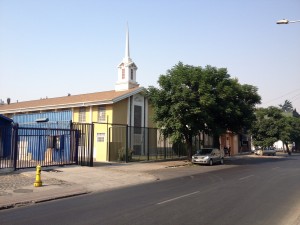 I spent the day at church yesterday, which was a great experience. I walked through the center of the city. Lots of construction. I saw some graffiti that said, “no venderse al poder.” Don’t sell out to power. Good advice. The very second I crossed the threshold of the church, having arrived a little early, I was greeted by a handshake and a wind-knocking embrace, and a wish for a Happy New Year. I was approached by at least a dozen other people who wished to greet me. Everyone was hugging and kissing (I later learned that this was particularly the case because of the New Year–it is Chilean custom to embrace on the New Year). It was beautiful. I spoke with a man who was baptized in 1968 and had seen the growth of the church all these years. Turns out he had been the temple president and lots of other things and knew everything about the history of the church in Chile. He was very helpful in describing to me what the church was like in the 1970s. We intend to talk more later, but he told me that the first stake was organized in 1972 and by 1977 there were seven stakes total. There are now close to 100.

It was fast Sunday, so I heard testimonies that were heartfelt and expressions of spiritual maturity. The testimonies ranged from young children to senior citizens, men and women, and one in particular struck me. A young mother stood and said she wasn’t much for words and then proceeded to express herself like a poet. And she said, “a veces nos cuesta ver lo bueno que somos.” Sometimes it is hard to see just how good we are. It was marvelous. Much better than I anticipated. The lessons were terrific too.

I then took a bus to a town a few hours away where a family lives that I baptized 29 years ago in Venezuela. The parents are featured in the photo at the beginning of this entry. Here are two of their children.

I confess this was something I had been looking forward to for a long time. I knew they had moved back to Chile but had lost contact. I tried to find them on my two previous visits unsuccessfully. This is a family I originally met miraculously after my companion and I had decided our ward needed more priesthood leadership. We made it a point to fast and pray for the chance to find a priesthood leader that very morning. I remember getting up off of our knees and feeling so full of faith I could burst. And when we entered a large complex of apartment buildings, I remember being crazy enough to point up to a window and claim that that was where I thought our family was. My companion remembers that he was the one who pointed. It was more like him to be the one, but for some reason we were unified enough with the same feeling of confidence to have richly confused the memory. And they were there, as it turns out, the Ordenes Family: Sergio, Davla, and their infant, Dalvita. They seemed old to me then, but they were very young, late twenties, as you can see here. 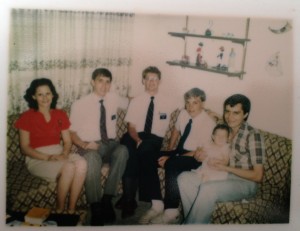 After three months of instruction, they decided to join the church. A year later Sergio was serving in the Bishopric. He recently served as a Bishop in Chile. They always talked to me about how beautiful Chile was and showed me pictures and when I left they gave me a copy of Canto General, the great epic poem by Pablo Neruda that I have been teaching for years and wrote part of my book, New World Poetics, about. That encounter had changed my life. The only reason I knew of their whereabouts was because they found me on Facebook a few years ago. (In fact, I later had a former student who served in their ward where he was serving as Bishop, a student who had studied Neruda with me!)

I arrived in Quilpué where they live and met Sergio at the bus station. We embraced like old friends and walked to his home where his wife, and two of their three children were waiting for us. We had such a wonderful time seeing each other. The daughter, Dalva, was a baby in her mother’s arms when we knocked on her parents’ door. She is now 29 and married. Their other son, Alejandro, is 22. Their third child, also Sergio, served a mission in Argentina and is 27. I will be meeting him later back in Santiago. They are all working hard to make a living here. I learned a few things about them I hadn’t known before. I always wanted to know why Sergio had left Chile to go to Venezuela and then why he had returned. He left in 1979 (around the same time that the protagonist’s mother in my novel takes her away from Chile as it turns out). He was not involved in the resistance to Pinochet but he was no sympathizer with him either. He understood what a mess Pinochet was making of the country and could see how his actions were isolating Chile. So he left. He works in the mining industry in quality control, so his livelihood depends on international investments, and they were going strong in Venezuela. But he eventually saw the writing on the wall in Venezuela with the rise of Chavez. He understood that it was a good time to return to Chile, and so they did in 1995.

Their lives have been irrevocably marked by that day when we knocked on their door. I feel so fortunate to have been a part of the drama. I knew then that I was only an instrument in something far grander than I knew, but now with the passage of so many years, it is even more obvious that none of this had anything to do with me. I just got to witness it with front row seats. They are a loving and kind family, full of laughter and warmth. Dalva, the mother, has a benign tumor that has caused problems with her vision, and she admitted to me that she passed through a very difficult period of depression over it, but she is a woman of great faith and trust. Sergio lost a brother to suicide the same year I did in 1982, only months before, and yet it never came up in our conversations together about the meaning of life in Venezuela all those years ago. It was too hard for him to talk about. But he remembers finding the LDS practice of serving the dead by providing ordinances for them to be very comforting and he later went through the temple for his brother and his father. I told him about my experience going through for my brother. Even though I had planned a visit of a few hours, they insisted I spend the night. I ate three meals with them and we talked for hours. I feel privileged to have renewed our friendship. I guess one lesson is that through small and simple things, great things come to pass. You can’t foresee the effects of the seeds of good you try to plant, but plant you must. They will bear much more fruit than you can yet imagine because God is good. If you treat every relationship with that in mind, you just might get to witness miracles. 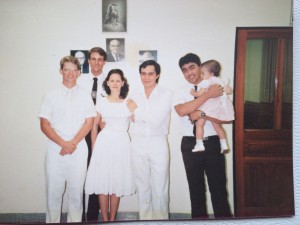 January 10, 2014 Chile Journal #2
Recent Comments
0 | Leave a Comment
Browse Our Archives
get the latest from
Latter-day Saint
Sign up for our newsletter
Related posts from Home Waters