Chile Journal #5: The Hope of Nature 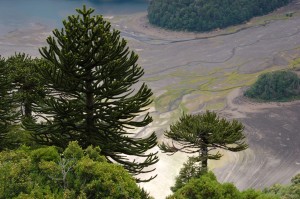 Pablo Neruda once said that if you didn’t know southern Chile and the Chilean forest, you didn’t know this planet. He wasn’t the first great poet to be guilty of bioregional chauvinism, of that kind of local pride that tends toward exaggeration and overstatement. But then again, having been here a few times and explored the area, I am not about to tell you he is wrong. As I have written before, I believe every place, just like every person, deserves a lover given to rapturous praise.

The novel I am writing about a Chilean woman who is raised in the U.S. but who returns to Chile as an adult to find the story of her father who disappeared during the Pinochet dictatorship is not about the environment per se. But she is a painter and has recently been hired by a botanist who lives in Utah Valley to paint a book of wild flowers of the Wasatch Front. He teaches her to begin to develop an ecological sensibility that she did not previously have, and after a long search in Chile for her father’s story (with results that will remain a secret until the book is finished!), she has the good fortune to spend a few days exploring the marvelous landscape of three generations of her father’s family. It is in this context that she finds some needed healing from the sorrows of her family past.

That’s enough about the novel. What you really want to know (and see) is what this area of Chile offers (trust me, you want to see it). I only have the chance to offer a brief overview in three parts: the coastal area, the temperate rain forest, and volcanoes.

First the coast: this photo was taken from the location where Pablo Neruda first saw the ocean.

Big deal, right? Well, considering that he felt that this was the moment that gave birth to his poetry and considering that he is one of the literary giants of the twentieth century, it is worth commemorating. More interesting than when he first felt the poetic impulse is why. He describes it as the most solitary place in the world. This is an area of a particularly violent and unsettled coast. The waves beat upon the beach irregularly, breaking farther out and then closer in again and often the water pulls with such force back into the ocean, it causes incoming waves to surge directly upwards as two unyielding currents collide. This is also the place where, following the world’s strongest earthquake in history, suffered a massive tsunami, leaving the nearby down of Puerto Saavedra completely buried and destroyed. So the place is haunting. And as you can see from this photograph, just a short distance from the ocean is a slightly salinated lake, Lago Budi, that reaches toward the ocean.

Once a year, the sand is dug out and an outlet into the ocean is created to help drain the lake. Before the earthquake this happened naturally. This terrain is home to the Mapuche Indians, a people of tremendous pride and a history of heroic resistance to colonization, having defeated the Spanish colonizers and successfully holding white settlement at bay in the area until the 1880s. Neruda felt the heartbeat of the planet here as well as a key to the mystery of his nation’s history and its hidden traces of buried lives. 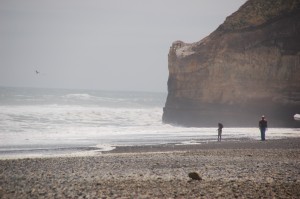 Second, the forest. This is an unusual forest, since it is temperate but also qualifies as a rain forest.

Few places in the world share such characteristics, but the northwest of the US and the neighboring coastal region of Canada share climatic similarities. Tragically, much of this forest has been destroyed and many areas remain endangered. Southern Chile is home to many important hard woods, enormous trees that reach to the skies, the most notable here are the Coigue and the Pehuen, the latter also known as the Monkey Puzzle tree, an ornamental tree often found in Europe, seen here.

Moss grows thick in this forest, mushrooms drop from tree tops where they grow in the wet rain, wildflowers grow in the stream beds, and birds sing a variety of songs I have never heard elsewhere. I wish I were more of an ornithologist to identify them. This is really fantastic forest cover, as you can see, and one feels overwhelmed by the height and density of the royal trees that abound here. 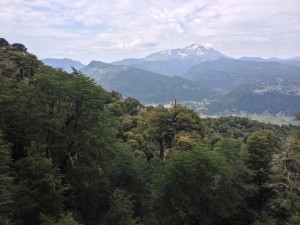 I was here after a prolonged dry period, so things were not as wet as they usually are, but the moss remained clinging to the trees everywhere.

Finally, the volcanoes. Years ago I had the privilege to hike to the top of Villarrica Volcano not far from where I am now. At the time, it was spring and there was still a considerable amount of snow on the cone of the volcano, requiring crampons and ice axes. Standing next to the opening of a volcano and witnessing its belches of sulphuric smoke and occasional flashes of hot lava teaches you the force of the earth like nothing else. It is terrifyingly beautiful.

This time, I was able to drive to the base of the Lonquimay Volcano, which is mostly dry now, but also surrounded by a massive spread of ash in every direction. The hike to this crater was not far as the crow flies, but it was slow going because of how soft and slick the ashy ground was to walk through, like walking through very deep and very fine sand. It wasn’t fun climbing in that stuff. But this crater erupted just 26 years ago and covered the area in new ash.

And from this spot you can see for other volcanoes, all active. One of the thing that impresses you is the way the grays and browns of the ash and lava rock contrast the intense green of the forest, as you can see here at the base of Volcano Llaima where the river of lava stopped. 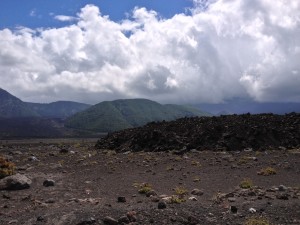 The interdependent interactions between earthquakes, volcanic eruptions, and tsunamis is fascinating, making for a sense here of a perpetually imminent threat of violent and sudden change. In 2010, Chile saw another massive earthquake a few hours to the north of here. But it also makes for a stunningly beautiful landscape of contrasts of colors and strange and exotic forms.

So, I suppose it is true that you would know more about the planet if you knew southern Chile. I thought I would share. It only seemed to make sense that I should set at least part of my novel in this incredible place, but the rest of the novel takes place in that other indispensable part of the planet (objectively speaking, of course!): the Wasatch Front. Both places are endangered, threatened by global processes such as climate change and by thoughtless and indifferent local human activity, but they both still have beauty that needs and deserves preservation before it is too late.

February 2, 2014 Mormons and Public Transportation
Recent Comments
0 | Leave a Comment
"Watch, the hour is nigh ( Mark 13). The disciples are commanded to watch, for ..."
Hunter Perreira Obedience as Gratitude
"sounds to me like agenda 21 mixed with mormon doctrine......so what is being taught here......philosophies ..."
Sean Shafer Environmental Stewardship and Mormon Belief
"Thank you for sharing this beautiful, thoughtful article! Understanding that I don't have to earn ..."
Teresa Jones Obedience as Gratitude
"George, this is your old friend, Gary from MP a long time ago.I like your ..."
outdoorsguy On Disagreements at Church
Browse Our Archives
get the latest from
Latter-day Saint
Sign up for our newsletter
Related posts from Home Waters