Stop Comparing The Communion Line With The Confession Line 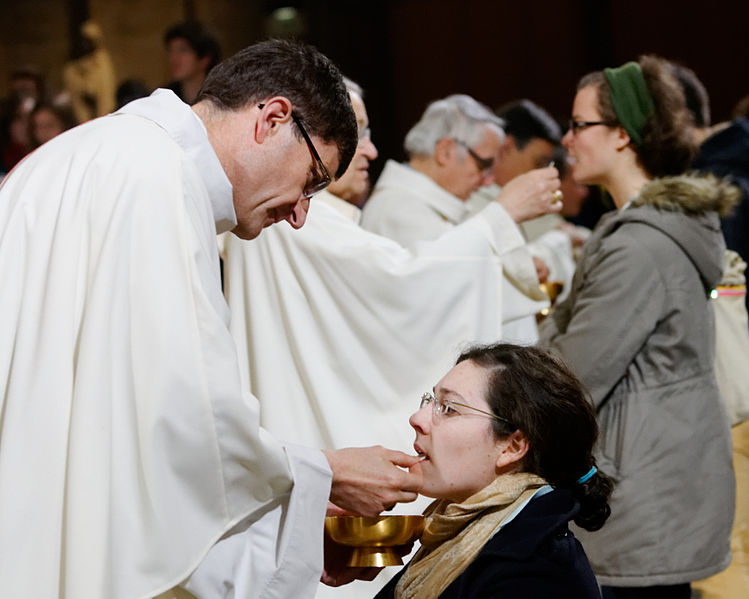 A story: much of my family is Traditionalist Catholic. One of the many things Trads hate is receiving communion in the hand. Truth be told, I’m not a fan either. Anyway, there I was, at a wedding of one of my family members. At the reception, after the Mass, one of my aunts sought me out, and said something like, “Oh, so you think the Body of Our Lord is like a piece of gum?” Indeed, at the wedding Mass, I had received communion in the hand. One of the reasons why I was so shocked by this was that, precisely during this Mass, after receiving communion I had had a powerful prayer experience. I had cried a lot, and I had deeply felt the power of the Real Presence. This made her comment not just rude in a superficial, social way, but deeply uncharitable–particularly at that moment, the idea that I had disrespected the Body of Christ revolted me with a righteous passion. It was many many years ago, and yet the moment is perfectly etched in my memory. The point is that only God knows our hearts, and focusing on outward signs of spirituality is a grave error, for countless reasons which should be obvious to anyone familiar with the Gospel. Maybe for some people–maybe even a majority!–the choice to receive communion in the hand bespeaks an improper lack of reverence for the Body of Christ. But not always. Not always.

I often think back to that moment when I hear a line that is often heard in some Catholic circles in some version, but always in reproach: “The communion line is a lot longer than the confession line.”

Now, this line starts from a whole bunch of sound premises. That we should indeed “discern the body” (1 Cor 11:29) and come to the table of the wedding feast of the Lamb with a heart full of grace; that, indeed, the obligation to do so tends to be seen by most faithful in the wake of the Vatican II Council as a mere guideline. And yes, there’s been a dramatic slide in confession, with disastrous spiritual consequences, and people should go to confession much more often, much more regularly. And, of course, it’s impossible to encourage people too much to go to confession. All of this is true. 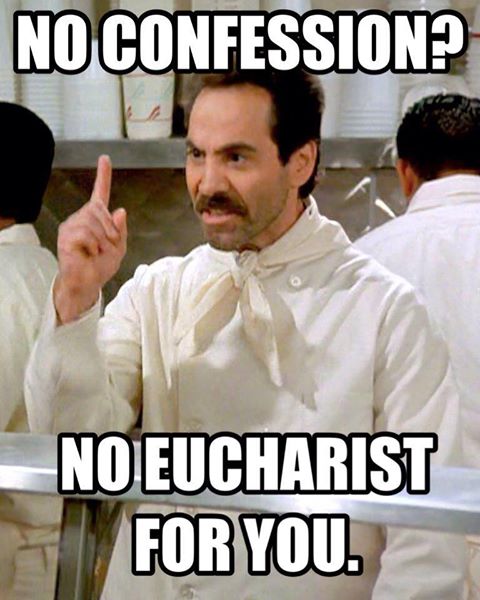 But here’s the thing. You don’t know people’s hearts. First of all, (low, booming voice) as a matter of canon law and infallible dogma, perfect inward contrition confers the same graces and the same divine forgiveness of sin as sacramental confession. And the words of the liturgy invite all those present around the table to this act of perfect contrition (“Lord, I am not worthy to receive you…”), they don’t ask if anybody went to confession. In your parish, you may have long communion lines and short confession lines, but you do not know who came to the table with a contrite, grace-filled heart and who didn’t. For that matter, you don’t know who, under the grace of the spirit, ran into the closest church over their Friday lunch break and got the best confession in their life and has been on cloud 9, floating in a state of grace, the whole weekend, and for whom receiving the body is a spiritual fireworks.

In reality, are our confession lines short and our communion lines long because most people nowadays have a dilettantish spiritual life? (Note: it’s perfectly possible to go to confession with clock-like regularity and still have a dilettantish spiritual life.) Yeah, probably. Almost certainly. But you. don’t. know. what is going on with this communion line and this confession line, and this brother and that sister. And the Lord our God did not give you authority to judge them. Just like you don’t know if your brother received communion in the hand because he was disrespecting the Body, or because he’s never been shown better, or because he was so deep in prayer while in the communion line that he didn’t think and just did what the person in front of him did.

By all means, encourage people to go to confession all day, every day. It is such a wonderful fount of living water. But please, stop comparing the communion line with the confession line.

April 24, 2014 Towards A Catholic Economic Anthropology (2) : Man As Economic Co-Creator
Recent Comments
34 Comments | Leave a Comment
"https://en.wikipedia.org/wi..."
pgtipsster The Best Defense Is A Good ..."
"The point that leapt out at me from this post is the complaint that atheists ..."
Bob Seidensticker The Amazing Incuriosity Of The New ..."
"I'm glad to see the atheist reaction against New Atheism becoming more widespread. Although it's ..."
Steven Bollinger David Hume Against The New Atheism
"Which may indicate you don't actually know the Gospel. Tell me: if you died and ..."
Andy Inoculated
Browse Our Archives
Related posts from Inebriate Me