In Defense Of Flagellation 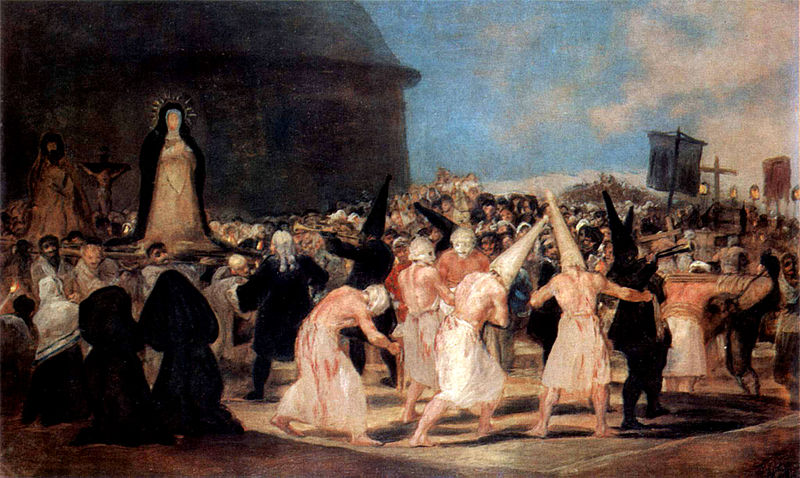 Fellow Patheosi Billy Kangas is a co-founder of the excellent theology website Theologues and its podcast Roundtable. I am listening to this episode, which deals with the “problem passages” of the Bible. This is not what this post is about.

During the podcast, the guests made several in-passing negative references to the monastic practice of self-flagellation, which were never challenged. In particular, they made a couple points: the first is that God, being fundamentally non-violent and opposed to suffering, could not condone such a practice; second, that monks who engage(d) in such a practice were trying to earn holiness. Yet we find that many great saints, who were in no dangers of such spiritual aberrations, nonetheless undertook this practice.

I would want to say a couple things, here.

The first is that, of course, today we have a very great awareness of the psychological harm caused by self-abuse (except for one kind of self-abuse, amirite) and masochism, and this is indeed something of which we should be aware, and indeed all the great Catholic spiritual writers emphasize that self-mortification should only happen within the context of wise, discerning spiritual guidance. So, absolutely, it is possible for flagellation to be the product of psychological disorder (or, indeed, just everyday pride), and awareness of this is necessary.

That being said, though, one aspect of human nature of which we recently have much less awareness is the need for us to discipline our passions through asceticism. Though we were washed of the stain of original sin by baptism, we remain concupiscent creatures, marred by the consequences of sin, and are called to engage in a lifelong process of healing from these, and to greater holiness. Though our bodies are indeed good, our flesh, that is, those aspects of our nature that tempt us to sin, are not. And in order to be truly free, that is to say, truly alive, that is to say, in the image of God, we need to engage in spiritual warfare against the flesh. Christians are called on the path to self-mastery, and it is not possible to walk that path without a confrontation with the flesh. We are called to discipline our appetites, to discipline and mortify our flesh, and ascetic practices undertaken with that goal in mind are virtuous–indeed, necessary.

We must always keep in mind that the Christian way is that where sin abounds, grace superabounds. In other words, asceticism must always be undertaken out of love and for love, and most spiritual warfare against the passions will be a kind of indirect warfare, that of strengthening the good and the true and the beautiful within us so as to “squeeze out” or suffocate the appetites of the flesh. That being said, it is unrealistic to think that direct confrontation can or indeed should always be avoided.

Undertaken within the right context, and with the right goals, then, mortification of the flesh, can usefully remind us of our mortality, of our bodily and creaturely nature, and be a useful weapon in spiritual warfare. Catholicism–Christianity–is a religion of the real, of the Earth, of incarnation, of the tactile. For us the crucifix, not the bare cross. The nails. The crown of thorns. The battered body. These are realities, not abstractions. “Blood of Christ, inebriate me; Water from the side of Christ, wash me; Within Thy wounds, hide me.”

I would say another very important thing: flagellation is typically undertaken as a kind of penance. Within Catholic theology, penance is not undertaken as a way to “earn” forgiveness, but rather as a sacrifice of thanksgiving for the forgiveness graciously and undeservedly granted.

And penance finds its wonderful place within the great Christian symphony, because it is a way for us to conform ourselves to Christ. Christ suffered for our sakes, and suffered as a thanksgiving sacrifice to the Father, thereby smashing the power of sin and death, overwhelming them with an invincible flood of divine love. Christ, the new Adam, the true man, is our brother, and we receive the merits of his Passion and Cross because he is in solidarity with us and us with him. Thus, when we suffer in solidarity with his Passion and Cross, when we are scourged as he was scourged, in a true spirit of faith, we receive graces, not in the sense that we earn benefits, but in the sense that grace is what perfects nature, and that when we are, by the Spirit, more conformed to Christ, our nature is perfected. Christ, the true man, did not regard his equality with God as a thing to be cherished, but rather emptied himself, taking the form of a slave. Thus to be true men, we need to be emptied, emptied of pride, emptied of self-regard, emptied of vanity, so that we can be free of the slavery to the flesh into the true freedom which is slavery to love. Christians are not called to flee from suffering, as Christ did not, but rather to embrace it, to take it on, and thereby turn it into good.

While we Catholics have often misused or misunderstood our spiritual heritage, we are very often liable to be prisoners to an ethnocentric spirit of the age that simply assumes that it knows better than previous generations. The fact of the sensus fidelium and our need of the sentire cum Ecclesia compels us to look beyond our modern offense and spiritual practices we might sometimes like to forget and instead carefully discern what it is that men and women holier than us saw there. (Or to put it more shortly: “If Dan Brown disdains it, it’s probably good” is a good rule of thumb.)

(NB: In case anyone wonders, though it’s none of your business, I don’t practice self-flagellation.)

November 14, 2014 The Rosary As Bible Study
Recent Comments
4 Comments | Leave a Comment
Browse Our Archives
get the latest from
Catholic
Sign up for our newsletter
POPULAR AT PATHEOS Catholic
1

Dear Ohio: A Word About Snow
Steel Magnificat
Related posts from Inebriate Me