What Abortion Does to Us

Charles Krauthammer explains why the Planned Parenthood expose videos will have effects on the public:

Abortion critics have long warned that the problem is not only the obvious — what abortion does to the fetus — but also what it does to us. It’s the same kind of desensitization that has occurred in the Netherlands with another mass exercise in life termination: assisted suicide. It began as a way to prevent the suffering of the terminally ill. It has now become so widespread and wanton that one-fifth of all Dutch assisted-suicide patients are euthanized without their explicit consent…

[T]hese revelations will have an effect on public perceptions. Just as ultrasound altered feelings about abortion by showing the image, the movement, the vibrant living-ness of the developing infant in utero, so too, I suspect, will these Planned Parenthood revelations, by throwing open the door to the backroom of the clinic where that being is destroyed.

I agree with Krauthammer that the legal implications of these videos are probably insignificant. There is zero chance of Planned Parenthood’s losing federal funding while the current administration is in office, and by the time a President who would sign such legislation would be able to, public fervor may not be as high.

But #DefundPlannedParenthood is about more than tax dollars. It’s about, as Krauthammer notes, turning on the lights inside the abortion industry. I’ve argued before that pro-abortion sentiment in this country thrives off ignorance. Is there a more coherent explanation as to why Planned Parenthood and its allies lobby against ultrasound and parental notification laws? By keeping the visceral reality of abortion obscure–and by drenching the debate in muddy jargon–the architects of legal abortion can fold into “pro-choice” ranks many who might otherwise stand for life.

But what about those people like the medical officials in the videos? What about people with a lifetime’s worth of experience in dismembering unborn bodies (and then haggling over a fair price)? They are not clueless. Krauthammer’s ominous words about “what abortion does to us” sound like the Old Testament prophet’s warning that those who worship idols eventually become like them. There’s a hardening of the moral sensibility that must come to those who learn to excel in the business of death.

That’s the testimony of the late Bernard Nathanson, the famous abortionist-turned-pro-life activist. Dr. Nathanson’s documentary The Silent Scream has been credited with converting many to the cause of life, merely through its grisly depiction of an actual abortion. Like many other pro-life activists, Nathanson was militant for the cause of abortion rights for a long time as a medical professional. The story of his conversion to the cause of life is in this terrific profile by Robert P. George, and I encourage you to read the entire piece.

One chilling paragraph, with a quote from Nathanson, stands out:

By his own estimate, he presided over more than 60,000 abortions as Director of the Center for Reproductive and Sexual Health, personally instructed medical students and practitioners in the performance of about 15,000 more, and performed 5,000 abortions himself. In one of those abortions, he took the life of his own son or daughter—a child conceived with a girlfriend after he had established his medical practice. Writing with deep regret in his moving autobiography The Hand of God (1996), Nathanson confessed his own heartlessness in performing that abortion: “I swear to you, I had no feelings aside from the sense of accomplishment, the pride of expertise.”

“I had no feelings.” That’s it. That’s what Krauthammer means when he says “what abortion does to us.” The numbness, the deafness, the coldness. The corrosion of the moral imagination.

The videos of Planned Parenthood depict a culture–and likely a business–defined by its emotional distance from reality. The unborn children whose parts are bargained for over a red wine are not the only victims here. Can a society with such a calcified conscience ever regain its humanity? Yes it can. Like Dr. Bernard Nathanson, abortionists can discover the beauty of birth, through the miracle of rebirth. The blood of Jesus Christ runs deeper and redder than the bloodiest surgical tool. A dead moral imagination can be raised to life again, as sure as the dead body of the Son of God was raised. 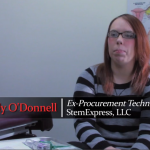 How Can You Know If You're...
Preventing Grace
Related posts from Samuel D. James