If we applied the same moralistic standards that we often expect of our students to the stories that fill our curriculum, we would lose the opportunity to introduce our the young to the murderous Macbeth and his three bearded friends. They wouldn’t just be losing the enjoyment of a good story, but the chance to grapple with fate and free-will, to self-examine their own ambitious hearts, to have the eye-opening experience of identifying with a man who buckles under the pressure of an apple too enticing to say, “No.”

There’s a scene elsewhere in Merritt’s book Jesus is Better than You Imagined that most every evangelical family will relate to. The Merritts were driving to church and, as all evangelical children are prone to do when on the way to church, Jonathan and his brother were bickering in the back seat. As the family pulled into the church parking lot, Merritt’s dad turned around and sternly told his sons to knock it off. “You’re Merritts. You need to act like it.” From this and similar experiences Merritt took the principle that it was better to simply ignore whatever sin issues or struggles exist in one’s life and get on with pretending to be a good, upstanding Christian who never struggles, never sins, never has doubts or questions. Merritt is hardly alone in this. Jason Boyett begins his memoir O Me of Little Faith with a tedious confession of all the ways he faked maturity as a Christian young person. Zierman, in her much more successful book, tells a similar story from her early days at Northwestern College in St Paul MN.

But there’s something odd about this complaint and specifically about the language of mask-wearing. In his classic book Mere Christianity CS Lewis uses the same language, but for him this act is an essential part of maturing in the Christian life. Writing about Christian ethics in the latter portion of the book, Lewis tells his readers that the best way to learn to love a difficult person is to pretend that you already do. Lewis refers to this decision to act in a way contrary to your feelings as wearing a mask. And, if you wear a mask long enough, Lewis says, you begin to grow into it.

Patheos Symposium: “The Future of Faith in America: Evangelicalism”

Lots of good perspectives here on the future of evangelicalism from my boss Russell Moore, Carl Trueman, Thomas Kidd, Derek Rishmawy, and many others. Well worth your time.

Also, you can access, for free, C.S. Lewis’s essay “The Abolition of Man.” This is one of Lewis’s most prescient, prophetic essays. I highly recommend reading it, and more than once. 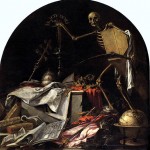 July 24, 2015 What Abortion Does to Us
Browse Our Archives
get the latest from
Evangelical
Sign up for our newsletter
POPULAR AT PATHEOS Evangelical
1

The Goodness is Fundamental
We are awash in goodness, truth, and beauty. All we need do...
view all Evangelical blogs
Copyright 2008-2020, Patheos. All rights reserved.