Can ‘Elf on the Shelf’ teach kids about Jesus?

[Ed.: I wrote this three years ago, when my daughter was 1. Now I have three children under 5 and I still think Elf on the Shelf is horrible. Well, not objectively horrible. Just heretical and unchristian.]

My bride scored about a dozen Elf on the Shelf dolls at a huge clearance sale. (Barnes & Noble, maybe. I don’t remember.) We gave away or sold all but one. Personally, I’m not a big fan of the underlying logic, which leverages lies, bribery, and a little dose of shame to incentivize good behavior. Be good, children. The elf is watching you. S/he reports back to Santa. If you’re nice, you’ll get stuff. If you’re naughty, well, maybe you won’t get any new toys. I know it’s supposedly all in good fun, but I’m a fuddy-duddy.

Unsurprisingly, I had a fairly negative reaction to mommy blogs which make the rounds this time of year. One, entitled “Elf on the Shelf Jesus Style,” lays out a rationale for using the Elf to teach children the religious meaning of Christmas:

My husband and I want our child (and future kiddos) to enjoy the magical part of Christmas that is Santa. We also want them to understand the true meaning behind Christmas.

This Christmas, we are going to do Elf on the Shelf Jesus style. We don’t want to do the “naughty or nice” scare tactic. We want to use the Elf to combine the magic of Santa and the celebration of Jesus birth.

In case you think God and Santa are not conflated enough in pre-schoolers’ minds, here’s your chance really confuse children. The blogger goes on to explain that she will have the elf introduce daily activities to instruct her child in beliefs and practices that are characteristic of people who have Jesus in their hearts.

I suppressed my virtual gag reflex long enough to read several more comments and blog posts that were quite thoughtful, deliberate, and judicious in employing Shelf Elves in the religious education of children.

I’m still not buying it.

No matter how Jesus-y you make your elf’s Advent/December integration into your home, kids will be most vividly aware of the connection between the elf and Santa Claus. I would be concerned that the newly-taught religious beliefs and behaviors (however admirable) will be internalized primarily as manipulations to make Santa bring the cool toys.

It’s worth noticing the similarities between common understandings of Santa Claus and God. Both are bearded old white men who live in places that do not actually exist in any physical or spatial sense. Both watch you all the time and keep meticulous records about how naughty or nice you are. Both offer a tempting bargain: be good and believe improbable things now for the sake of getting stuff later on.

My concerns about the Elf on the Shelf concept (belief in things that are not true, bribery/bargaining, shame) are for many people perilously and irrevocably tied to very real struggles with religious faith.A

Is your Elf on the Shelf a useful tool to teach your children about Advent, the Incarnation, or the biblical accounts of the Nativity? Absolutely not! I’d say it’s unlikely at best and confusing and perhaps even harmful at worst.

A more likely outcome is that children will internalize a religious justification for the strong association between Christmas and stuff. As they grow older, they will be told to abandon their supernatural belief in Santa and his army of elves. But they will be told to historicize and literalize the Christmas Story, with special emphasis on the idea that sinfulness is transmitted intergenerationally through sexual intercourse, on the virgin conception of Jesus, and (possibly) on the Perpetual Virginity of his Blessed Mother. Believing all this (or at least 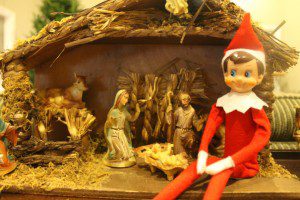 pretending to) is an important part of the “being good” that Santa rewards with new and ever more expensive toys each Christmas.

On that note, instead of Merry Christmas, please accept my best wishes for a strong retail-driven 4th financial quarter. 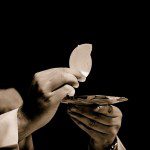 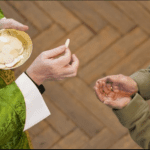 December 5, 2016 Catholic divorce, remarriage & Communion: A primer for Protestants
Recent Comments
0 | Leave a Comment
"Simple. His politics served Evangelical ends better than Hillary's did. The logical fallacy being projected ..."
Scot McKay Trump’s stunning admission about his evangelical ..."
"Your use of the term "homosexual" to refer to gay people, which is as offensive ..."
Self-Evident Truth Why opposing same sex marriage isn’t ..."
"i think it's a what we call "far right" in general thing and i think ..."
Brandon Roberts Why are white conservative Christians so ..."
"i personally feel people that it's bisexual with a different name however i also see ..."
Brandon Roberts Is fluid sexuality a Millennial thing?
Browse Our Archives
Related posts from Capitol and Cathedral