This summer, President Donald Trump announced his nomination of Kansas Governor Sam Brownback to be Ambassador-at-large for International Religous Freedom. The administration noted:

Mr. Brownback has been Governor of Kansas since 2011. Previously, he served as a U.S. Senator (1996-2011) and a U.S. Representative in the House of Representatives (1995-1996) from Kansas. While a member of the Senate, he worked actively on the issue of religious freedom in multiple countries and was a key sponsor of the International Religious Freedom Act of 1998.

There has been a fair amount of commentary on Brownback in this role, ranging from skeptical to favorable to effusive. I would like to underscore three points.

I may not vote for Sam Brownback or agree with some of his domestic policy preferences. But I thank the president for nominating a serious person — not a given for political appointments, perhaps especially in this administration. I send Mr. Brownback my best wishes and urge skeptics to give him the benefit of the doubt. 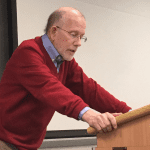 August 28, 2017
Michael Cromartie was a good and great man
Next Post

November 26, 2017 This is not normal, Day 310
Recent Comments
0 | Leave a Comment
Browse Our Archives
Related posts from Capitol and Cathedral