The other night the President argued: “America is not the world’s policeman. Terrible things happen across the globe, and it is beyond our means to right every wrong. But when, with modest effort and risk, we can stop children from being gassed to death, and thereby make our own children safer over the long run, I believe we should act. That’s what makes America different. That’s what makes us exceptional. With humility, but with resolve, let us never lose sight of that essential truth.”

President Obama invoked our exceptionalism that we, the United States, since we are uniquely virtuous, should, if we can, be the world’s conscience, and when called upon in circumstances we must act. And so our President shames us, the American people, into acting by arguing: “And so, to my friends on the right, I ask you to reconcile your commitment to America’s military might with a failure to act when a cause is so plainly just. To my friends on the left, I ask you to reconcile your belief in freedom and dignity for all people with those images of children writhing in pain, and going still on a cold hospital floor. For sometimes resolutions and statements of condemnation are simply not enough.”

The President claims that the cause is plainly just: by bombing a country that we are not at war with (and that cannot threaten us) this will surely stop them from using chemical weapons. In order to save that country we must bomb it. And for us, on the left, we should just get over our moral qualms, sometimes violence works as a deterrent. We should trust and believe our government that these bombs will surely dissuade Syria and other like-minded types to resist the temptation to use these weapons.

Well, I won’t be shamed into this bombing, and I don’t buy the argument that the U.S. is somehow exceptional in our virtue and that we, among all nations, should bear the moral conscience of the globe. Think about that, the President mentioned “humility,” how is this project a project of humility?

In fact, it’s not “us,” those on the right or left, that need to be ashamed, it’s the history of the United States that needs to be tamed and disenchanted. We, the United States of America, have used chemical weapons from World War II through the Vietnam War, over and over again, in ways that are as stark as the picture below. That little girl, Kim Phuc, survived and has had to deal with the continuing pain from her injuries from U.S. Napalm for her whole life. She is a hero, who has gone on to work for a more peaceful future. 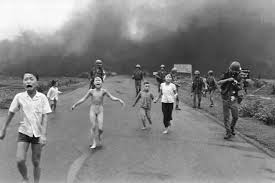 But it wasn’t just Kim Phuc, the United States, as Laurence O’Donnell’s report detailed the other night, we invented and perfected the use of Napalm and used it relentlessly on Dresden in WW II, on Korea and in Vietnam. Tons and tons of this “cheap” nerve gas was used because it “worked,” getting deep into human tissue, and generating heat of over 800 to 1200 degrees Celsius. As O’Donnell’s relates, as we watched this chemical weapon work in Vietnam, “Our moral superiority in war slipped away.”

Following Vietnam, the United Nations instituted a ban on the use of Napalm against civilian populations. This “new” red line prevented what the U.S. did from ever happening again. However, it took the U.S. 29 years to sign it, and it is still legal to use Napalm against the military targets. As O’Donnell rightly argues, “We will never make war civilized, no matter what kinds of weapons we use. War is the failure of civilization.”

So, no, I won’t be shamed and I won’t just say, “Oh yes, the U.S. is the exceptional nation, and we should then be the one to do the business of telling and showing the world what they should and should not do.” I don’t buy it and I’m not convinced that this is what we should do.

Juan Cole’s analysis of the President’s speech and proposal was crisp and to the point: “Given that a military attack on Syria is an act of war that could have unforeseen negative consequences for the US, given that a few cruise missiles are not in fact likely to be a powerful deterrent, and given that the US is on the wrong side of international law and has almost no effective allies in such an action, it seems to me unwise and even illegal. Obama’s invocation of American exceptionalism (which historians consider a flaw, not a virtue, in American history) is intended to paper over this illegality.”

Cole then argues for a non-violent approach: “The fact is that the US could inflict far more pain on the Syrian government with nonviolent means such as tightening the financial boycott on its banks, than it could with a few missile strikes. President Obama should show some backbone and buck the war party inside the Beltway, and insist on non-violent but effective punishment of Damascus for its atrocity, instead of the somewhat juvenile insistence that “action” equals violent action.”

Americans and our President, in particular, need to stop invoking our “exceptionalism.” It is not only a lie, but it is a way of selling us on the idea that violence can and will be redemptive. It has been shown that since 1963 the U.S. has bombed people on average every 40 months. How has this violence been redemptive? How can our actions be called exceptional?

It’s time for Americans to rise up and call an end to this madness. To tell the President we must become truly exceptional not by turning to violence, but by not using bombs, by not thinking we have all the answers. By using other means, non-violent ones, to encourage peace, to undercut the terrible civil wars that now kill and maim so many.

This would be exceptional: that the globe’s world power no longer claims to be exceptional; who now uses nonviolent means to resolve problems. This would make history: a humble approach and an approach that as a people who purport to be Christian, we can actually begin to live out the words and actions of the one who we supposedly claim to follow.

September 7, 2013
"America has no business in the Middle East"
Next Post