I suppose I can be accused of being biased on the Super Bowl. I live in Seattle. I’m rooting for the Seattle Seahawks to win the Super Bowl. So be it. I have, however, tried to think about this grand national pastime and wonder, on occasion, should I participate in it? Shouldn’t the violence, so typical of an NFL game, be a kind of rebuke to my enjoyment of this game? More to the point, why is an NFL football game so central, so absolutely necessary to so many Americans? What is the draw? Is this our national civil religion?

I think a lot about American religion, politics and culture. My coming book, now being written, is called High on God: How the Megachurch Conquered America. It will come out with Oxford University Press in 2015. I’m beginning see some real similarities between NFL football games and megachurches.

Here’s why. I use Randall Collins work on Interaction Ritual Chains to compare the two. Collins argues that human beings are Emotional Energy seekers. We are hungry for emotional experience, so every human activity involving social life and energy is always an interactive ritual chain. These chains are pretty simple. They involve feelings of belonging, a sense of co-presence, a moral feeling, membership symbols, and barriers to outsiders.

Well, needless to say, this pretty much sums up a Seahawk game. More than 60,000 people jam the Clink each Sunday; people are stuffed together; symbols of membership are de rigueur; the moral rightness of our team, including the 12th man, rises like a self-righteous cloud of smoke, and Forty Niner fans are not welcome. 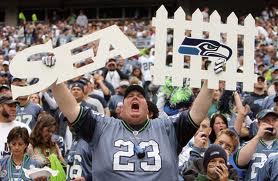 In fact, my friend took his father to the NFC title game, they were close to the field, at the fifty-yard line, and usually this is a more sedate part of the crowd. Nonetheless, he described how numerous fights were breaking out between Hawk and Niner fans, and at one point, his father went to help a Hawk fan who was being kicked on the ground; then my friend’s father was knocked to the ground by another Niner fan, and he had to be rescued. It was near chaos. As my friend said, “My father said ‘this will be my last game.’”

So, there we have it—an emotionally charged group, wearing their colors, “all in” for the team, and ready to punch, kick or otherwise dismember an outsider.

The one difference with megachurches is that in our research we rarely found barriers to outsiders in these churches. In fact, we found megachurches doing everything they can to bring “new” people in. While on the other hand, Seahawk games have all the energy but with a real sense of threat in the air. Not very Seattle-like really, but very much how strong groups function.

Emile Durkheim explains that civil religion is defined, “… by the idea a culture has of itself.” American culture, symbolically and emotionally, gathers itself once a year for the Super Bowl. It is the most watched event in our culture. This is America’s national civil religion on full display.

What does this say about us?

1. We like violent sports. I’m an NBA fan and have been all my life. I fell in love with the Seattle Supersonics, and when they were sold I nearly had a coronary. I also loved the Boston Celtics and I’m now a sometime Indiana Pacer fan. But I’ve noticed the fandom for the NBA is very low key. And I wonder if a part of this is that the League has slowly de-escalated the fighting that can take place in the games. NBA games now are almost dainty affairs; you can barely touch anyone on defense.

2. Violence in America is our dirty little secret. I’m a BIG Breaking Bad fan. The show is a long morality tale on the moral corruption of a high school chemistry teacher, Walter White, whose transformation from a family man and chemistry teacher to meth-making killer is a mesmerizing slide into darkness. My good friend, Martin Jaffee, a fellow scholar of religion at my university, said to me, “The show revealed that Walter was not actually trying to take care of his family by making drugs, but it actually turns out that in the end, he was doing it because he was good at it and he enjoyed killing people.” That is our dirty little secret. Americans, as our history plainly shows, like killing people. Read the Dominion of War: Empire and Conflict in America, 1500-2000. It is a real life history of how war has been the backbone of our country from the very beginning to our present. 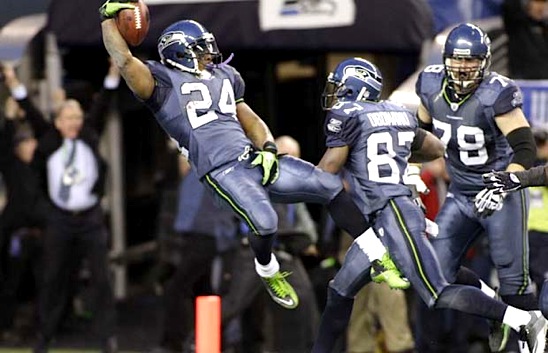 3. The hint of violence in football is what keeps us on the edge of our seats. Have you ever wondered why they replay the moments when a player gets hurt over and over again? Okay, now you know. It’s what makes this game nearly erotic—someone might get hurt. Let’s be clear, I’m not above this by any means. Kam “Bam” Chancellor and Marshawn “Beast mode” Lynch (on defense and offense, respectively) have one aim: to violently remove the ball from the body of the offensive player by any means necessary, and on offense, to push the ball down the throat of the defense. Watching “Beast mode” run is an experience that literally sets off seismic meters for earthquakes in downtown Seattle on a regular basis.

What does this say about America if NFL football is our national civil religion? Well, for people who like the game, they will say, “Oh, he’s just sour because Seattle lost the Super Bowl in 2005 to the Pittsburgh Steelers.” And for those who hate the game, “Well, oh my God, no wonder our country is in trouble.” What about for those of us who know the truth of this game and yet still enjoy it? Well, people like me, are in that grey area, which is enjoying something that you really aren’t supposed to enjoy. But isn’t that just so human? And isn’t that what St. Paul said, “I do the very thing I hate.” Hm. The human dilemma so perfectly summed up in a game. Go Hawks!