I Saw this Coming

One of my favorite authors, Sherman Alexie, had a wonderful tweet after the election: “Anyone else feel like a bird who just flew into a window? I’m shaking off the hit & ready to fly and fight again.” Well I must say I’m still on the ground, wiggling around back and forth trying to figure out what just happened. This is not to say I didn’t see this coming. I didn’t want to see what was coming, but there were many signals that things were not going well for the Democratic Party.

About two years ago, something happened in a classroom that quite literally made my head spin and for the longest time I didn’t understand it. I was teaching a class on Cultural Interactions in an Interdependent World. It is an International Studies course. The whole point of the course is to recognize difference; to deal with interactions with “others” that aren’t necessarily comfortable, and to practice the art of recognizing those who are traditionally, historically and culturally invisible.

But on this day in the middle of a lecture that was summarizing theories of cultural difference, three white males stood up in the middle of class and held a minor but quite shocking protest. They claimed, together, that I had discriminated against white people in the course and particularly white males.

Well, needless to say, I was stunned. I didn’t react defensively, I asked some questions, tried to understand their point of view. Nonetheless, it was disturbing. 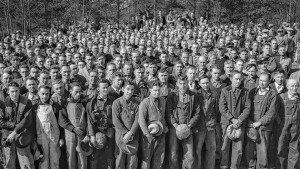 I could tell that the entire 200-student class was equally stunned. Many came to my defense, and the three males and I spoke afterwards, and I tried to listen to where they were coming from. For sure, they felt picked on and that all the problems of racism, sexism and prejudice were being laid at their feet and they weren’t going to take it anymore. I did recognize, only later, that some of their language came directly from Sean Hannity at Fox News.

It was the beginning of a long process of recognizing that something was and is brewing in our culture, particularly among our white brothers and sisters. There is a feeling that the pendulum has swung too far in listening only to the grievances of people of color, and other minorities.

I saw this coming as I watched the Republican debates. The Republican candidates were simply saying what was expected, using the same bromides of Republicans, supporting the rich and the privileged. And I noticed, much to my chagrin, that I enjoyed not only watching Trump humiliate these establishment candidates, but make them look like fools by saying what everyone was thinking. Trump seemed unafraid. He intuited the rage and disgust of the large, beleaguered white middle and lower middle classes.

Many said, “How can he say the things he says!??” And I get it, but secretly there are a lot of folks out there who either want to say what he was saying, or simply enjoyed somebody finally saying what many were thinking.

Trump blustered and ranted and those of us in the elite circles went slack jawed, and many others, including conservative and blue-collar white men thought, “That is what I’ve been thinking forever and finally someone is telling the truth.” Now this may not be the truth empirically, or in the conventional sense of saying what is accurate, but Trump said what many white people were thinking and more importantly have been feeling. Somebody was standing up for them.

I saw this coming when I tried to listen to Hillary Clinton’s nominating speech at the Democratic Convention. I listened to most of the other main speakers; most were mesmerizing; the Obama’s, and especially Michele’s speech, were spectacular. Hillary’s speech fell flat. I didn’t say anything. I just turned it off. I literally thought, “Well, it is boring, and I’ll just turn it off, and vote for her because it is the right thing to do.” In other words, it was like I was taking my medicine. Hillary didn’t energize anyone with a new vision. She missed, in particular, appealing to the Democrats in the lower end of the economic scale, those in unions, those in the lower middle class who feel that they have been left behind and forgotten.

I saw this coming when I listened to evangelicals arguing for the importance of a pro-life position. I know I have no right to make judgments on whether a woman should or should not choose to abort her fetus. And yes, I get it and I support choice. But when Hillary was unable to even hesitate in the question about aborting a full term baby, I thought, “Wow, shouldn’t we all hesitate, contemplate and pause over this kind of decision? Is abortion NOTHING more than birth control? Isn’t this going too far? Isn’t life sacred?” And yes, I believe in choice, but shouldn’t we all see late term abortion as sad and tragic? Trump won 81 percent of white evangelical vote, the highest percentage ever.

I saw this coming, when I’ve traveled in the Midwest—specifically through the older suburbs of Grand Rapids, Michigan. I noticed, row after row of mid-century homes, which used to be bustling suburbs of middle class families, either shadowed by for sale signs, run down or simply empty with no life anywhere to be found.

And yes, we can all say, “Well, there are retraining classes out there for these folks.” But what tech firm is going to hire a late middle age white man, who has no experience in technology, when young people take to it like fish in water?

Trump, with his redoubtable and obnoxious style has told it like it is, or at least he read the resentments and the aggrievement that is in the white male culture of America and they believed him and trusted him and they responded. If Democrats don’t respond to this group, and recognize them and begin to hear them and see them as humans with real concerns they will continue to get beaten at the polls.

I hope we can become the kind of people that recognize each other’s pain, the ones we can’t see and don’t want to see. Otherwise we are in big trouble.

November 11, 2016
Resilient Peace in the Time of Crisis
Next Post

January 30, 2017 Time for a New Confessing Church
Recent Comments
0 | Leave a Comment
"I recommend this as reading for those who are really in grief. I've relied on ..."
Don Davies Job, Grief and Being Sticky-A Sermon
"Do you mean that we should not have a separation of church and state? If ..."
Judgeforyourself37 Time for a New Confessing Church
"James, I'm new to your work and who you are. Hey, I appreciate what you ..."
Peter E. Watts Driscoll on Patheos: My Request for ..."
"I think the designation "Mainline" had more to do with mainstream theology than with being ..."
jekylldoc Bullish Times for Religious Progressives?
Browse Our Archives
Related posts from James Wellman on American Religion